A strange type of star never before found near the Milky Way’s center is providing new clues about the bizarre behavior of the supermassive black hole lurking at the heart of our galaxy.

The black hole, known as Sagittarius A* (Sgr A* for short), is as massive as 4 million suns and is thought to have played a critical role in shaping the Milky Way. Yet it somehow devours only a tiny fraction of its available food supply—a smorgasbord of gas and dust cast off by nearby stars, notes radio astronomer Heino Falcke of Radboud University Nijmegen in the Netherlands. That’s a puzzle astronomers have been trying to solve for years.

Observations of an elderly, rapidly rotating star known as a pulsar in the vicinity of Sgr A* have now provided the first sensitive measure of the magnetic field associated with the black hole. The strength of that field may help account for Sgr A*’s poor eating habits, Falcke and his colleagues report online today in Nature. 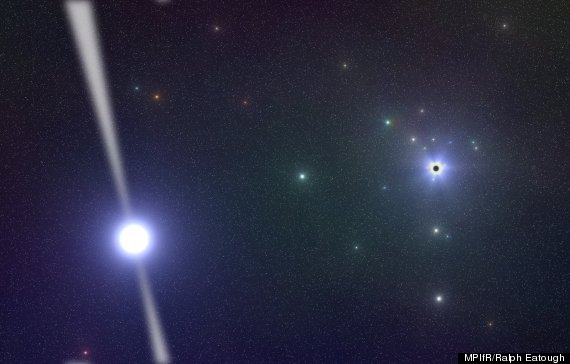 Artist's impression of a pulsar with a very high magnetic field ("magnetar") in direct vicinity of the central source of our galaxy, a supermassive black hole of approximately 4 million times the mass of our sun. Measurements of the pulsar imply that a strong magnetic field exists in the vicinity around the black hole.

Pulsars reveal the magnetic field in neighboring reaches of space because they typically emit polarized light—radio waves that vibrate in a particular plane as they travel through space. When the waves pass through a magnetized region, the polarization changes direction in proportion to the strength of the local magnetic field.

That’s why Falcke and his colleagues rushed to the Effelsberg radio observatory near Bonn, Germany, last April when two x-ray spacecraft hinted at the presence of a pulsar only a third of a light-year from Sgr A*. “People have been trying to find a pulsar around the galactic center for decades,” Falcke notes.

Using Effelsberg and several other radio telescopes to measure the polarization of the pulsar, the team found that the magnetic field near the star is at least 2.6 milligauss. Although that’s only about 2% of the magnetic field at the surface of Earth, it’s still surprisingly large, Falcke says. Moreover, much closer to the black hole, the field could be as great as several hundred gauss, the team estimates.

“We always knew the magnetic field was important but we never quite knew how strong to dial it in in our models,” says theoretical astrophysicist Christopher Reynolds of the University of Maryland, College Park, who was not part of the study. Gas and dust pulled close to a black hole resists falling directly into the gravitational maw because it possesses rotational energy, or angular momentum—the same reason that Earth doesn’t fall directly into the sun. Small magnetic fields generate a kind of turbulent friction that robs the gas and dust of some of its angular momentum, facilitating its infall. But according to some models, larger magnetic fields, comparable to that estimated in the new study, may act in the opposite fashion, suppressing the infall of material and potentially placing a black hole on a starvation diet, Reynolds says.

Every large galaxy is believed to house a supermassive black hole, and the masses of the galaxy and the central black hole grow in lockstep, numerous observations have shown. Gaining a better understanding of how much mass black holes accrete may therefore provide new insight on how galaxies pack on the pounds, astronomers note.

The new magnetic measurement will also need to be taken into account as a slew of telescopes track a gas cloud called G2, which is expected to fall onto Sgr A* sometime next year. The light show that G2’s demise may produce and just how quickly the cloud will accrete “will be very strongly dependent on the magnetic field,” Reynolds says.