Normally, Livingstone is home to 150,000 Zambians and international tourists seeking out the unique beauty of the Victoria Falls.

This week, Livingstone has also been host to the Pan African Grain Legume and World Cowpea Conference, the first conference dedicated to boosting pulse productivity, nutrition and processing in Africa. It could be a potential milestone in the fight against global hunger.

The four hundred academics, NGOs and scientists are here to do something really important: turn around the lack of investment in agricultural research and development, which is handicapping the ability of poor, small holder African farmers to fight climate change, boost productivity and feed their families. 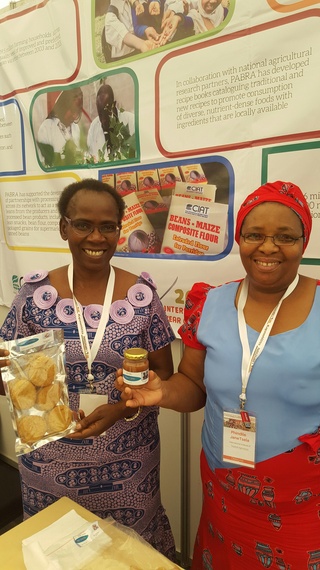 It's not that money isn't invested into agricultural productivity. It is. But many crops don't' attract their 'fair share' of investment. For example, pulses. The shame is these crops, often known as 'orphan crops' because they get ignored by funders, are potentially vital in the fight to deliver the UN's Sustainable development Goals (SDGs) because of their nutrition-density, affordability and positive impact on soil, which is why the UN FAO has declared 2016 the International Year of Pulses.

This lack of investment was underlined prior to the Pan African Grain Legume and World Cowpea Conference, when a new global survey, showed agricultural researchers are concerned the current level of research funding into pulses is so low it may be handicapping efforts to improve food security and agricultural sustainability.

Called the 'Global Pulse Productivity & Sustainability Survey', the survey suggests annual investment in pulses hovers at $175m, whereas billions are invested into other crops such as corn.

There are some major contributors to global funding for pulse crop productivity and sustainability research such as CGIAR, USAID and the Bill and Melinda Gates Foundation. Most countries in North America and Europe maintain an international funding agency. Others have national funding programs. But is it enough?

"No. Bottom line: we need a 10-fold increase in pulse research funding," according to Huseyin Arslan, President of the Global Pulse Confederation, which commissioned the survey. "With over 800 million people suffering from acute or chronic undernourishment, increasing pulse research is vital. We can only meet the world's protein needs with better varieties of chickpeas, peas, beans, and lentils."
Which brings us back to Livingstone.

#Legumes4Africa is the theme for the Pan African Grain Legume and Cowpea Conference. It's focused on grain legumes because of their potential to play a significant role in delivering against the UN's new SDGs - especially Zero Hunger, Good Health & Wellbeing and Life on land.
Or, as Gavin Lubinda, Zambian Minister of Agriculture, so eloquently put it: 'The quality of life of a rapidly growing world population will be dependent on pulses.'

"Investments in pulses research have the potential for significant agricultural impact. The high nutritional value and climate resilience traits of pulses are well established to fight the global challenge of hidden hunger, poverty and environmental degradation, especially for the vulnerable populations of sub-Saharan Africa and Asia," says Shoba Sivasankar, Director, CGIAR Research Program on Grain Legumes.

India the largest consumer and a major producer of pulses has recently introduced subsidies for pulse production in a move which some see as a pointer for other Governments. Director General of ICARDA Dr. Mahmoud Solh, a leader in international agricultural research said: "India should be commended for being the first country giving subsidies now to pulses also which is expected to change the picture".
The Indian Government and others have also recently teamed up to launch a Global Pulse Research platform. "The platform will not only invest in the necessary research for new pulses technologies but also build the capacity of local scientists, extension workers and farmers, " according to Dr. Solh who calls pulses "climate smart crops" because they contribute positively to soil health. "The establishment of the Global Pulses Research Platform is a step in the right direction," Dr. Solh concluded.

The Global Pulse Productivity & Sustainability Survey and #LegumesforAfrica both highlight a broad consensus among experts about the need and focus for research in a key 'orphan crop'.
"With investment in crop improvement and agronomy research, pulses can be made resilient to climate change as well as diversify income sources for farmers. Focused research efforts creating expanded value-added marketplace for pulses will generate new market opportunities for farmers to make farmers prosperous as well as modernize our food system to become more sustainable, equitable and nutritious," says David Bergvinson, Director General, International Crop Research Institute for the Semi-Arid Tropics.

This consensus is a 'Big Step' forward. But much still needs to be done.
'Pulse production is about half what it could be and storage problems still remain,' according to Ylva Hilbur, from the International Institute for Tropical Agriculture.

''Smallholder farm yields are about 2-3 times lower than they are on research stations so we need to focus on sustainable intensification of cropping systems,' says Jeffrey Ehlers of the Gates Foundation, whose single biggest investment in pulses is the Tropical Legumes III project. His point is backed by many other experts.

By bringing together so many key people for the first time, #LegumesforAfrica has already achieved much. It could become a significant milestone on a journey to place pulses at the top of the political agenda for food security and nutrition.

If Gavin Lubinda is right, we need it to be.

Secretariat to the International Agri-Food Network