The following is an essay by William Gibson, written as the introduction for the book "Punk: An Aesthetic" [Rizzoli, $55.00] by Johan Kugelberg:

My punk, on reflection, in the light of twenty-first-century prosthetic memory platforms, wasn’t very punk at all. Not in 1977, anyway.

Where I had been more Stones than Beatles, 1977 saw me more Clash than Pistols, but not really all that wildly Clash. My primary ’77 diet, Google and Wikipedia now suggest, consisted of Stiff acts, idiosyncratic pub rock: Costello, Dury, Lowe, Wreckless Eric even. I liked that stuff quite a lot and still do, and whereas I would have been delighted to meet other people who liked that stuff as well, I was more likely then to meet people who spent their lives ticking off the artists and bands they had decided utterly sucked. Eventually, I sensed, they’d tick off all of my current favorites. And I hated that. Always have. Not that you might not like who I like, but that you expect me to enjoy your catalog of who sucks.

I don’t just want a big tent when it comes to music. I don’t want any tent at all. Fuck your smaller-is-better canon. I want to listen to Jane Aire and the Belvederes’ “Yankee Wheels.” (And I can, I just discovered, on YouTube. Not quite as fine as remembered.)

I got Patti Smith’s first album in the mail, 1975, from Lennie, in Toronto. Lennie and I had gone into Sam the Record Man one day, 1967, and had found a record by a band called the Velvet Underground. He bought it, we took it back to his bedsit, and basically I had my punk. My punk core. It probably fused, right then, with disparate elements of what nobody I knew yet knew to call garage. If it made me feel like anything else ever had, it was something like what I’d felt listening to the Standells’ “Dirty Water” twenty or thirty times in a row. Something that was behind “Dirty Water,” so to speak, but only revealed itself fleetingly, after prolonged shamanistic operation. But with these Velvet Underground bananasticker fuckers, that fleeting thing was up front, eyepoppingly huge, and just there. A keeper. The copy I went
back for a few days later, so I could have my own, was the first record I bought in Canada. I didn’t have anything to play it on and was essentially homeless. Floor-surfing the Summer of Love. With my Velvet Underground album.

Now, as I have written elsewhere, the thing that’s virtually impossible to convey about that record, in that moment, was that I had no particular reason to believe that Sgt. Pepper’s, released a little earlier, would be historically considered to be a far more seminal work. Because that hadn’t happened yet. In that moment, for me, the future course of pop might as easily grow out of this banana-stickered LP that that guy Warhol had had something to do with. Lennie sent me Horses, no cover letter. I put it on. And instantly knew that he knew I’d associate it with that earlier moment. Not that Patti Smith was much like the Velvet Underground, but that the Velvet Underground had definitely been there, been seminal all over it. It was outside. It was outside the counterculture.

The counterculture was seriously dire at that point, having, basically, won. Straight people (as we used to call them) were doing acid, and hippies were learning to do cocaine and flip real estate. And this could be ugly in ways that wounded, and you could get hurt just turning on the FM radio. Patti Smith’s Horses arrived like a life-preserver then, and then I discovered (possibly via a classified ad in the back of Rolling Stone) Ork Records’ 7-inch mono 45 rpm of “Little Johnny Jewel,” parts one and two. The utter weirdness of a 7-inch mono 45 in 1975 wasn’t lost on me. Dead platform mojo. I listened to that, to Patti Smith, and to my old Velvets records, and a certain balance could be restored. “Despite,” as Mr. Reed had sung, “all the amputa-tions.” (And Mr. Reed of course had been around, with his solo albums, and that helped too.)

But I had, in those pre-Internet days, little sense of anything going on. That which was outside of the counterculture had not yet made itself known to me, in Vancouver. This changed in 1977, when I visited Toronto for the first time since moving to Vancouver in 1972. I happened to stay with a friend, within drum-thump distance of the very earliest gigs at the just-opened Crash and Burn, Toronto’s first punk club. I saw the Nerves (who I think may have been from L.A.), the Diodes (who were definitely from Toronto), and had my first look at punk on the hoof. Not punky punk, exactly, but skinny-tie getting sweaty and a bit wild-eyed. Soon after my return, someone else returned from London with Sex Pistol 45s and a thick stack of U.K. punkzines. Amazing to see, when one hadn’t seen the like before. That
literally couldn’t happen today, that shock of the new. Today we know what new things look like before we encounter them physically. Usually we know what they’ll look like before they even exist.

Punk was the last pre-digital counterculture. Unless grunge was. Grunge was sort of on the fence. And not for that long, toppling smoothly forward into commodification. Cut-and-paste analog artifacts. The last thing I thought about punk, in 1977, was how amazingly old-fashioned the technologies it took for granted would seem. That the fact that there had still been a music industry (in the old sense) to assault (in the old sense) would seem wondrously archaic. I’d never seen a fax machine in 1977, or a PC. Punk, in my personal experience of its advent, felt like an explosion of something in between, a lubricant film, mere microns thick but infinitely slippery. Maybe that was why I was never that attracted to its edges, its formal extremes, preferring more traditional music that happened, commercially and iconically, within it. The pop that, like Dury, like Costello’s early work, had simply changed its pants.

What it did for me, the punk of 1977, was create spaces between, inhabitable cracks in the monolith of the baby boom 1960s. A lot of what I’ve done myself has been built within those cracks. It wouldn’t have happened, otherwise. The congealed fat in the cold griddle of Woodstock Nation would still be sitting there, and I’d be doing something else, unless some other counter-counterculture had come along, and then I’d still be doing something else. It made room. It really did make room.

Check out these 7 posters found in the book: 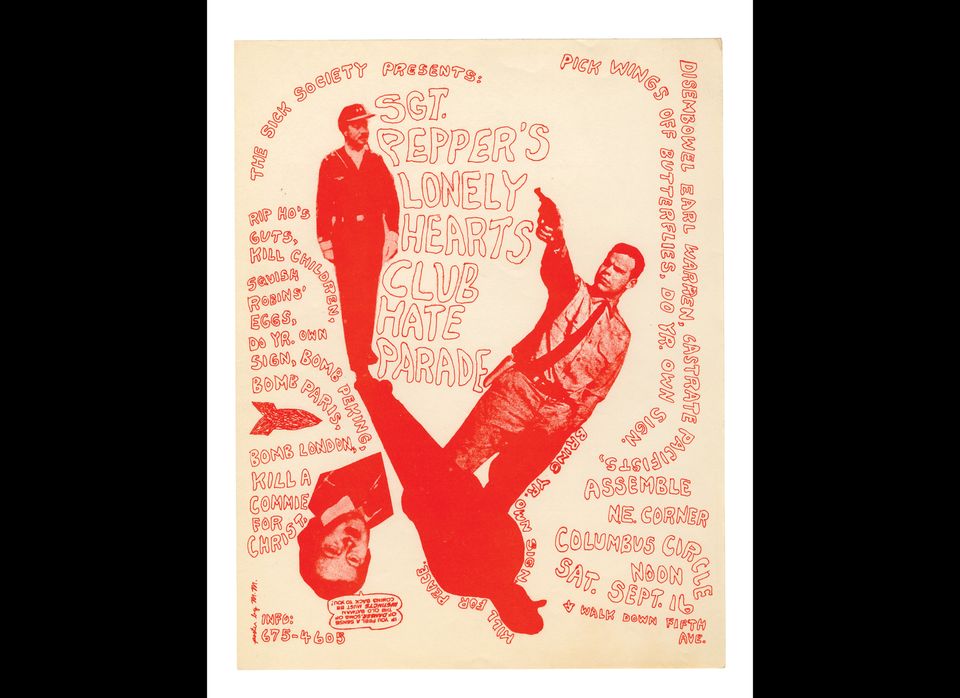