A viral video this week sheds light on a heart-rending situation: The radioactive puppies and dogs of Chernobyl.

After the catastrophic 1986 explosion at the Chernobyl nuclear power plant in what’s now northern Ukraine, many people forced to evacuate the surrounding area left their pets behind, thinking they’d be able to return in a few days. Instead, soldiers were dispatched to shoot the abandoned animals.

But some survived. And hundreds of dogs that now roam the area around Chernobyl are believed to be their descendants.

“Puppies of Chernobyl,” a short documentary uploaded to YouTube by filmmaker Drew Scanlon, shows a series of adorable puppies and dogs in Chernobyl’s exclusion zone — a 1,000-square-mile area around the nuclear plant where access is strictly limited.

Workers at the plant, tourists and some others are allowed in, but only under tight government control. Several hundred people, mostly elderly former residents, also have moved back into their villages over the years, against official orders.

Scanlon says in the video that officials forbade him from petting any of the puppies because of the hazards posed by radioactive particles on their fur. Seeing the little puppies come up to him seeking attention is pretty heartbreaking.

But efforts are underway to get the Chernobyl dogs the care they need.

The Clean Futures Fund — a nonprofit dedicated to helping communities in the aftermath of industrial accidents — is spearheading a five-year plan to spay and neuter the dogs and cats roaming in the area, then set up food and water stations and a veterinary clinic to help care for the animals.

The fund’s plan, which kicked off this summer, involves partnering with Ukrainian veterinarians and other volunteers, as well as organizations in Ukraine, the United States, the United Kingdom and Germany.

The dogs suffer from a lack of food and water, as well as predation from wildlife that has flourished in the area’s relative absence of people, Lucas Hixson, a radiation specialist and Clean Futures Fund co-founder, told HuffPost. While the dogs are surviving long enough to breed — and overpopulate ― it’s extremely rare to see one live to old age.

To avoid radiation exposure, humans are heavily restricted when it comes to where they can go and what they can do within the exclusion zone. But there’s no way to enforce those regulations on free-roaming canines.

“The rules of man mean nothing to the world of dog,” Hixson said. “They lay, they dig, they roll around, they drink puddles.”

The result is dogs with radioactive particles on their fur and inside their bodies — though researchers don’t know exactly how much.

Employees at the plant technically aren’t supposed to interact with the dogs, but many have grown strongly attached to the animals, feeding and playing with them.

“Many of these workers have adopted some of these dogs almost as pets,” Hixson said, though they aren’t permitted to bring the dogs out of the area.

Hixson said there probably aren’t “immediate health hazards” related to radiation from petting the dogs, though he would “definitely suggest washing up afterwards.”

However, the dogs pose another risk — rabies, which they can catch from encounters with local wildlife. Rabies, which is fatal if untreated, is a particularly scary threat in Ukraine, since the country depends on its supply of human rabies treatment from Russia. After years of conflict, supplies are dwindling.

Vaccinating the dogs and shrinking the population via spaying and neutering will reduce the rabies risk, Hixson said.

Clean Futures Fund’s work also involves trying to gauge just how much radiation is present in the dogs’ bodies. The findings could open up the possibility of Ukrainian officials allowing some of the dogs to leave the exclusion zone and ultimately be adopted.

Regardless, Hixson said he hopes his group’s work will improve life for the area’s dogs and safety for the people around then.

“I think there will always be a population of dogs in the area,” he said. “But hopefully, we can get down to a manageable population where they can have a good quality of life.”

You can learn more about the Dogs of Chernobyl initiative or donate here. 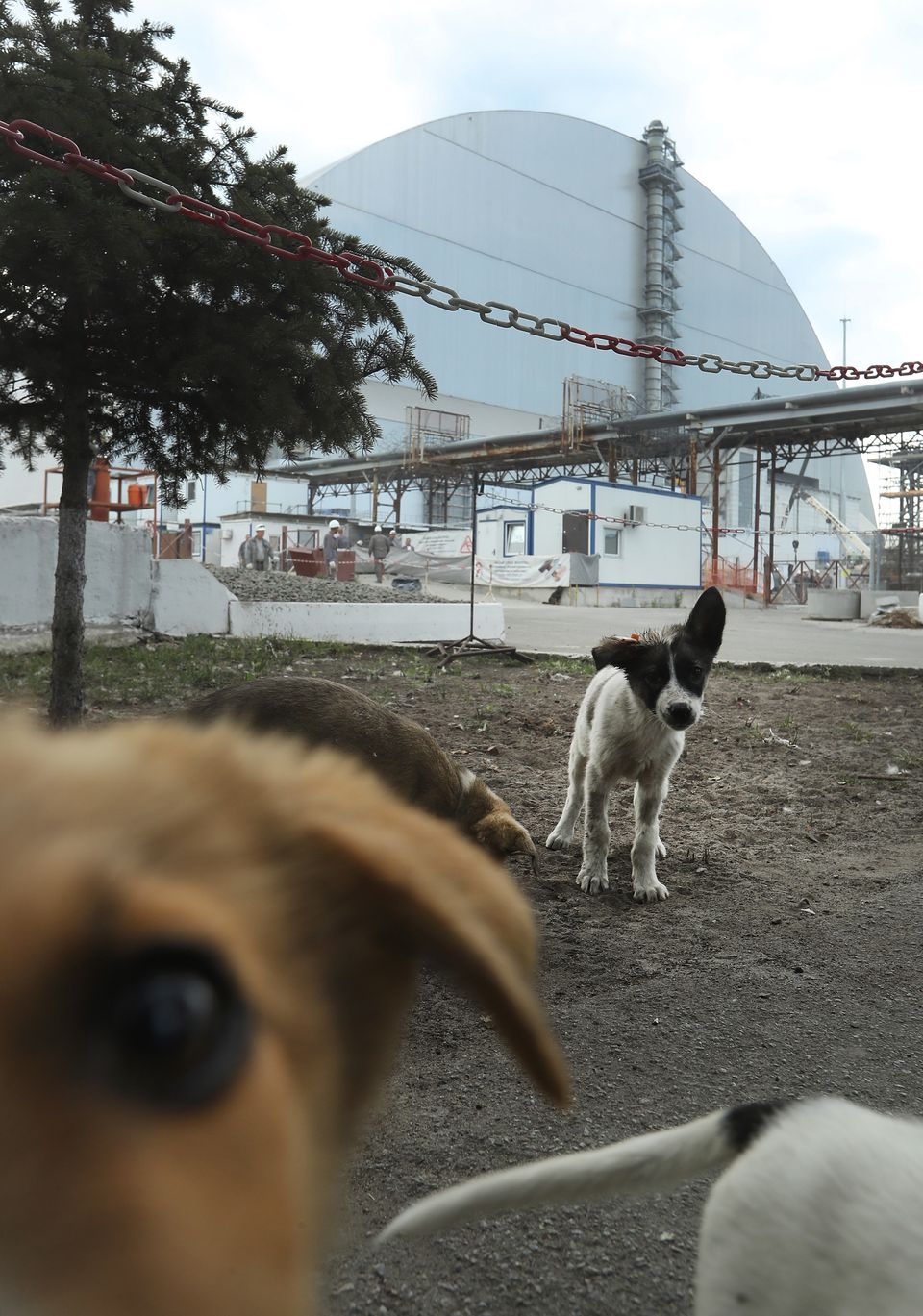 1 / 26
Stray dogs loiter inside the high-security "local zone" outside the new, giant enclosure that covers devastated reactor number four at the Chernobyl nuclear power plant on August 18, 2017 near Chernobyl, Ukraine. An estimated 900 stray dogs live in the exclusion zone, many of them likely the descendants of dogs left behind following the mass evacuation of residents in the aftermath of the 1986 nuclear disaster.
Sean Gallup via Getty Images