I really meant to ask some of the 20-odd people sitting cross-legged in a circle on the floor how it is they found themselves at the Southeastern Guide Dogs' campus on this fine Tuesday morning, having paid $10 each to hug some puppies.

In fact, a woman from the Midwest was just starting to tell me about the friend of hers who'd turned her on to puppy hugging when a little black ball of fur veritably leapt into my arms, practically insisting I kiss his soft little head, repeatedly.

And frankly, at that point, I became a little too blissed out to think about people. 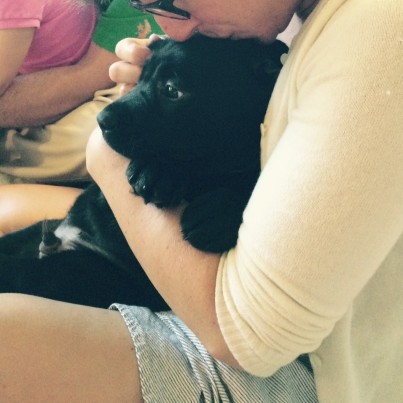 You can achieve that state of perfect happiness, too.

Five mornings a week, visitors to the guide dog training facility -- located in Palmetto, on Florida's west coast, about 45 minutes from America's top-rated beach -- can sign up for two half-hour puppy-hugging sessions.

And what puppies they are! These are 6- to 10-week-old Labs, golden retrievers and mixes of the two that have been bred from parents that show the very best health, trainability and success in guide work.

"We want our dogs to be the best in the world," explains spokeswoman Ruth Lando.

Still, there's a rigorous selection process before one will be chosen as an actual guide dog, which will then be donated, for free, to a handler. (You can read about the long process -- and the heartwarming stories of what these dogs mean to the people who get them -- in Sarasota Magazine.)

Of the 250 puppies who come through every year, only about 100 will have the right stuff. The others, called "career changers," may become drug- or bomb-sniffing dogs, therapy dogs, or even just good old, especially well-pedigreed pets.

Guys, puppy hugging is part of that sorting. Not only do these sessions help get the puppies socialized -- used to new people, smells and sounds -- but observations about how the puppies behave help determine whether or not they're on the guide-dog track.

"The puppies are evaluated at every stage of their development, from birth on," Lando says. 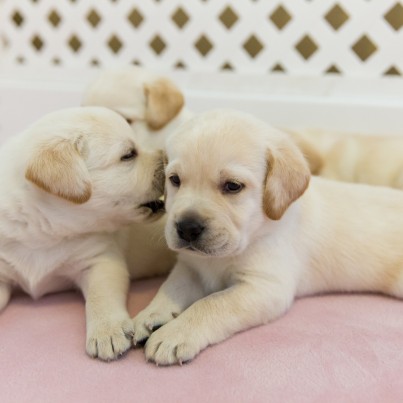 Southeastern Guide Dogs, which is entirely funded by private donations, was founded in 1982, and the puppy hugging program has been around for more than 25 years of that.

It's true that puppies can be a scarce commodity. In our group of about 20, for example, there were but five puppies.

And some reporters might have monopolized a puppy just long enough that a Southeastern Guide Dogs volunteer had to gently remind that person -- who really meant to be more generous, but the puppy seemed so comfortable -- that maybe someone else, like one of the children sitting so patiently, would also like a turn.

Say you're this kind of selfish type: There are ways to get more time to yourself with the dogs. You can sign up to walk dogs. You could become a volunteer "puppy raiser," who fosters a guide dog-to-be for about a year and a half until the dog returns to the center for formal training.

You can also reach out to the center and offer a generous donation in return for some private time with the puppies. Or, Lando suggests, you could just go online and reserve all 20 spots at any given puppy hugging session.

So go ahead, cuddle some gorgeous little puppies knowing that you're helping them go on to amazing futures, but let me warn you: You might have a bit of a hard time letting them go.

For Just $10, You Can Snuggle These Seriously Impressive Puppies
Unlikely Animal Friendships