Toddlers, sneakers, and even scales can tweet--so why not dogs?

A new Twitter-enabled dog collar called 'Puppy Tweets' from Mattel will allow Fido to broadcast its everyday actions on Twitter.

The LA Times explains, 'Attached to a dog's collar, the plastic tag randomly generates one of 500 canned tweets when it detects barking or movement and automatically posts an update to Fido's own Twitter page.'

'Puppy Tweets' includes phrases like, 'I bark because I miss you. There, I said it. Now hurry home' or 'I finally caught that tail I've been chasing, and . . . OOUUUCHH!'

Over time, your dog's tweets will eventually start to duplicate themselves (but then again, so do human Twitterers').

'It is a new frontier for us,' Mattel Brands President Neil Friedman told the LA Times. 'We think it could be the start of a new wave of products for people to interact with their pets.'

If you want your dog to tweet but aren't sold on Puppy Tweets, check out Japan's BowLingual. The app, which should be available in English later this year, promises to analyze your dog's bark and translate it into one of six emotions, which it then syncs with a phrase that corresponds to that feeling. That phrase can then be tweeted out through your dog's Twitter account.

Puppy Tweets will go on sale this fall for around $29.99. See a photo of the tweeting dog collar below. 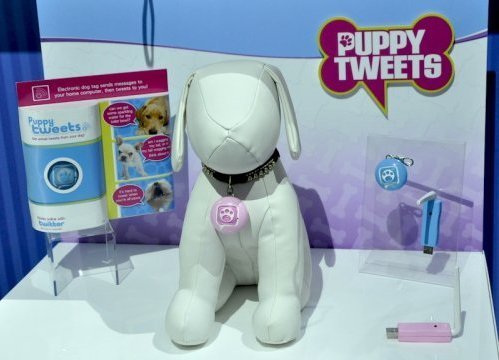 What do you think of the tweeting pet device--too much or too cool?