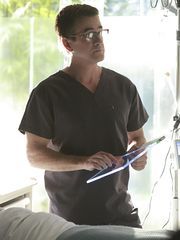 Pure Genius is a new medical drama that centers around a brilliant surgeon Dr. Walter Wallace (Dermot Mulroney) in asuper progressive, technically advanced hospital, Bunker Hill, created by a Silicon genius James Bell (August Prew). In the first episode, they deal with a child who's been in a coma for six months and a pregnant mother with cancer who won't take treatment because of religious reasons. There is lots of semi-soapy drama and cutting edge medical advancements that may someday be possible.

But change is here already according to one man. He questions why advances aren't moving fast enough, especially with baby boomers living longer and the need to find new battlegrounds for old diseases growing daily. His area is fetal stem cell therapy.

Dr. William Rader is a stem-cell specialist. Bone marrow transplant is the most widely used stem-cell therapy, although there are other therapies that are derived from the umbilical cord. The controversy that surrounds fetal stem cell therapy has to do with the location of the stem-cell. It requires a fetus to donate the cells for research. There has been a huge backlash, despite the promise of its ability to heal impossible diseases and prolong life. Great material for the writers of Pure Genius.

In The God Cells is a documentary which presents a study of patients who had given up all hope of having a pain free life. There is a wide age range, from a sixteen year old girl who wants to commit suicide because of insufferable pain to a woman with Parkinson's . The girl has a complete reversal of symptoms and the woman has a complete remission after stem-cell therapy and plays piano as she did as a young woman. These are extraordinary, miraculous stories where even the patients' personal physicians are flabbergasted at their success.

What is the mystery? According to Dr. Rader, the fetal stem cell is the only form of stem cell where you can obtain nerve cells from the brain of a fetus which is needed for Parkinson's and other neurological diseases. It is the only cell that has the inherent ability for expansion (growing more of the cells) which is why the material from one single fetus can treat thousands of patients. The pluripotent fetal stem cell searches the entire body for any kind of pathology it prioritizes; then sends the maximum amount of fetal stem cells to the area which is most severe. Wow. Sounds like something Raquel Welch could have done in The Fantastic Voyage if she had studied harder.
So who is this doctor behind all of this?

Dr. William Rader was a medical expert on ABC's Good Morning America and for thirteen years was a regular commentator on medical issues on KABC, Los Angeles. He served as chief psychiatrist for the U.S .Navy's alcoholic treatment program from 1971 to 1973 and developed a treatment approach to addiction that was later adopted as part of the Betty Ford recovery program at the Eisenhower Medical Center in California. He also created programs for eating disorders and built one of the first HIV/AIDS treatment centers in Latin America.

He first got into fetal stem-cell work in 1995 when he was invited to Eastern Europe to meet with scientists and doctors who had been making significant strides in fetal stem-cell research. Rader vetted all the doctors and then visited their hospital in the Ukraine to observe. The stem cells were legal there because abortion is legal and donors are given the choice as to whether they want to donate or destroy the fetal cells.

When he returned to the U.S., he was a changed man and in 1995 founded Stem Cell of America, an international corporation dedicated to the research and development of the clinical application of fetal stem cells. He currently serves as chairman of the board and chief scientist.

At seventy-eight, William Rader crackles with the type of intellect that could easily get him cast on Pure Genius. In fact, he contributed to an Emmy nominated segment of the ground breaker All in the Family when Archie Bunker was addicted to diet pills.

He is firm in his belief that fetal stem-cell therapy can give renewed life to those who have felt doomed by other medical models and longevity to those who believe we can live better and longer. And he doesn't believe that it should take ten years of trials before using them... he says that he has had success with over 4000 patients in the last 20 years without any negative reactions. However, because of the abortion issue, Dr. Rader has had to move his clinic twice due to threats from local politicians. At the present, it is based in Mexico.

Though not a cheap procedure, many patients have been given breaks on the treatment. He says they use the finest labs and every cell goes through trenchant analysis, three times over before being considered for his work. And he insists that when you weigh the cost of the process against illness, death and years of expensive medical procedures that don't work, it is cost effective.

His own book, Blocked in the USA: The Stem Cell Miracle, is filled with the science of the work and testimonies from seemingly grateful patients. There are countless stories of people who had reached the end of their ropes, only to find health and hope with this treatment. It's perfect content for Pure Genius and Bunker Hill Hospital.