Back in the day, when I was 21 years old, after I had been studying in Israel for about a month, I remember standing on a rooftop in the Old City of Jerusalem. I had that burnt-happy-tired feeling that comes from partying for consecutive days on end, and I thought to myself: "I am in the Old City of Jerusalem hanging out with Orthodox Jews, why do I feel like I am partying all the time?" Then I began to count all the Jewish holidays and festivals I had participated in, and I realized that Judaism was a religion filled with celebration. It was during this time that I learned that there was so much more to being Jewish than bagels and lox, the Holocaust and my bar mitzvah, which is basically what being Jewish meant when I was growing up. That unbeknownst to me for most of my life, Judaism was actually a spiritual path that was based on taking the physical and making it Holy. That to enjoy being a Jew, I had to be someone who loved to eat, sing, dance and get together with friends, and Jewish holidays are a big part of that.

Eleven out of the 12 months in the Jewish calendar have some sort of holiday, and the one that doesn't is known as a "sad" month. If you include Shabbat (the Sabbath, also a day filled with people gathering together to sing, pray, eat and drink) which happens every week, there are 71 holidays in total, some of them festivals lasting eights days long. I remember when I was in college, lining up for ice cream in front of Ben & Jerry's on "free cone day," which was a semi-holiday for my friends and I because before I got into Judaism there were not too many important days on my calendar. As I discovered my Jewish spiritual lineage, I learned that the Jewish calendar is not just a timekeeping device, but a map of consciousness and that each month and that each holiday was associated with certain spiritual qualities.

Right now in the Jewish calendar we are in the Hebrew month of Adar, which is associated with the Hebrew phrase "Mishe nichnas Adar marbim b'simcha," which means, "in the month of Adar we increase our joy." A big reason Adar is connected to the energy of joy because it is the month of the Jewish holiday of Purim. On Purim, religious Jews around the world (who generally live what is considered to be restrictive lifestyle to the average Westerner) will put on costumes, consume copious amounts of alcohol, dance in the streets, and get really intoxicated because God told them to. More specifically, there is a line in the Talmud, the central text of the Oral Torah, that says on Purim a person is supposed to get so intoxicated they "don't know the difference between Blessed is Mordechai and Cursed is Haman." 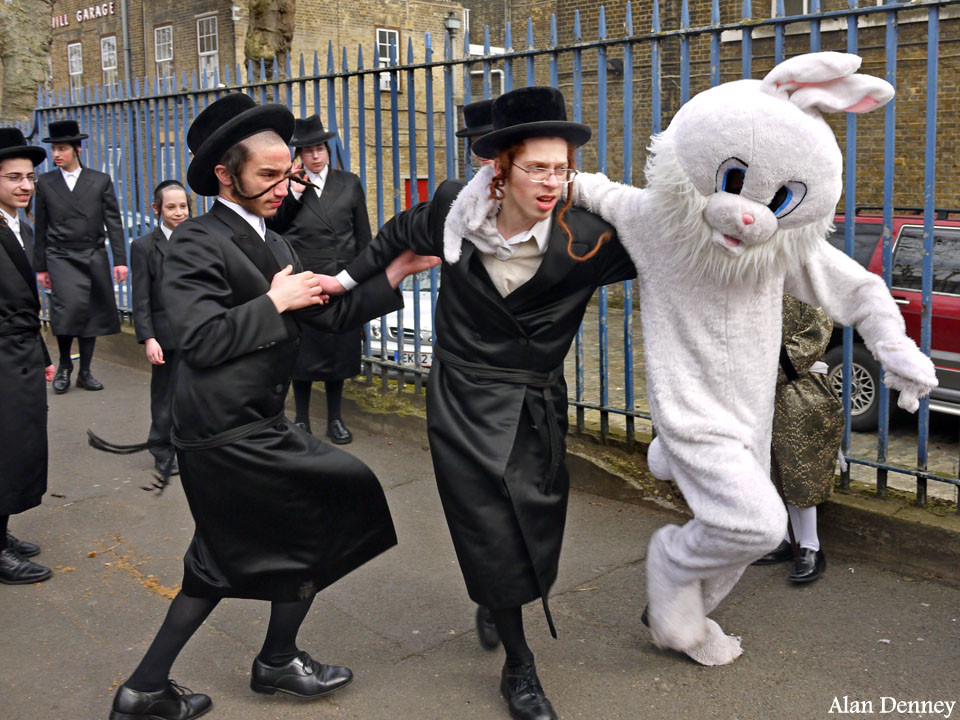 So what is Purim, who are Mordechai and Haman and why is one of them blessed and the other cursed? The word Purim can be translated as "lots," as in "lottery." The holiday of Purim falls on the 14th of Adar, the anniversary of the day according to the Book of Esther, that the wicked Haman (the villain of the Book of Esther) planned, through casting lots, to destroy the Jewish people. It is also the day, thanks to the intervention of Mordechai and Esther (the heroes of the Book of Esther) as well as some random coincidences that were not so random, that Haman's plot was foiled, and the Jewish people were saved.

The story goes that Haman ended up being hung on the very post he had built to execute Mordechai. Haman's hatred of Mordechai and the Jewish people arose because Haman was an adviser to the Persian King Achashverosh and Haman demanded that all citizens of ancient Persia bow down before him as he passed by, but Mordechai the Jew, who only bowed before God, refused to follow orders. By seeming chance, Mordechai's niece Esther ended up marrying King Achashverosh and was able to reveal to the king Haman's plot meant killing all the Jews including her. The enraged king ordered Haman to be punished by death and the Jewish people be allowed to battle against those who wished to slaughter them, and that is how the Jewish people were saved.

There are four main practices on Purim: to hear the Book of Esther (which tells the story of Purim), to give gifts of two different kinds of foods to friends and family, to give monetary gifts to the poor and to eat a festive meal. During the reading of the Book of Esther, when Haman's name is mentioned it is a custom to shout, raise a ruckus and make lots of noise in order to blot out his name. So on the surface, the Book of Esther reads like a story for children, and the dressing up in costumes and the activities create simply a fun Jewish holiday. At the same time, below the surface there is much more going on than meets the eye. Contained in the Oral tradition of Judaism, the Oral Torah, is the idea that all of these stories are not just stories, they are spiritual metaphors, sequences of symbolic information containing level upon level of information that is meant to be decoded. Mordechai and Haman are much more than good guys and bad guys, they are spiritual archetypes representing dynamics within the human soul.

Who is Haman? Haman is from the tribe of Amalek, which attacked the Jewish people at their weakest point when they were leaving Egypt. The Oral Torah teaches that the spiritual power of Amalek is doubt and cynicism. Amalek is the force that cools down the fire of a persons inspiration and idealism and causes them to give up their dreams. That laughs at and mocks at people who want to do good in the world. Amalek says that there is no point in being a good person, that nothing is going to change, everything is a joke, and doesn't matter if you live or die. That truth is non-existent and its all made up in the mind of human beings. That there is nothing transcendent, nothing really "True," and that human beings are not much more then selfish ego gratification machines. Rebbe Nachman of Breslov, a Jewish mystic and spiritual leader from the 18h century, teaches that Amalek draws its strength from the venom of the Nachash, the primordial snake, that lied to Adam and Eve in the Garden of Eden and caused them to fall into a state where good and evil became mixed.

The practical reality of Amalek is expressed as a nihlistic spiritual malaise in which people feel depressed, as if their lives are empty and there is no reason to get out of bed in the morning. The cynicism, apathy, depression, despair and feelings of worthlessness associated with Amalek can be fatal, especially among young people. According to the 2010 National Center for Health Statistics: Suicide is the fourth leading cause of death among those 5-14 years old and the third leading cause of death among those 15-24. Viktor Frankel, a Jewish Holocaust survivor and author of "Man's Search For Meaning," said, "ever more today people have the means to live but no meaning to live for."

Rebbe Nachman of Breslov also teaches that the cure for this venomous poison is the joy that comes through finding the nekudot tovot, the "sparks of goodness" hidden in the darkness. The Hebrew word for Jew is Yehudi, which comes from the Hebrew term "to give thanks" -- to be grateful. Haman wanted to wipe out Mordechai the Yehudi because he would not bow down to him, because Mordechai refused to give up his dreams and "bow to the haters." Mordechai and Esther, on a deeper level, are associated with faith, for which the Hebrew word is emunah. Emunah does not mean a blind adherence to a fixed dogma, but trusting in a Truth that is deeper and higher than oneself. Out of that faith comes a joy that is not dependent on ego gratification, on external circumstances going one's way, but is rooted in going beyond the ego and being of service to the Infinite.

The Torah teaches that if you look in the Book of Esther, God's name is not mentioned even once. Almost until the end of the story it appears as if the Jewish people are going to be destroyed and God is absent. So to, for many people in our times, it seems as if God is absent from our world, the forces of fear, ignorance and chaos are leading us toward destruction, that there is nothing we can do about it and that we might as well give up. A big part of emunah is the inner knowing that says, "I matter, life matters, and what I do matters." Mordechai and Esther didn't know if they were going to succeed, but because they had emunah they took action, and according to the Oral Torah, their intention created an opening for hidden Divine intervention, coincidences that were more than coincidences, through which they were enabled to save the Jewish people.

There is a method of interpreting the words of Torah based on breaking down each letter into its numerical equivalent. It's called Gematria. Rabbi Alexander Zusslin HaCohen, a German Rabbi from the 14th century, taught that when we examine the passage in the Talmud that says a person is supposed to get so intoxicated that he doesn't know the difference between "Blessed is Haman" and "Cursed in Mordechai," the phrase "Blessed is Mordechai" is equal to 502 and that "Cursed is Haman" is also equal to 502. We can learn from this a hint: that underneath the surface, beneath the duality of seeming opposites, of the mask of separation, Everything is One.

Purim is a radical embrace of the uncontrollable nature of life, celebrating the concealment of God through wearing masks, and the confusion of life through intoxication, and yet with faith in the Divine we go through chaos and transcend into something higher, into a place of Oneness. May Hashem bless us that when are weak and feel as if everything is falling apart, that we never give up, and that we have emunah, faith that its not the end of the world, that God is just winking at us through a mask, and to keep going.