Nichole Galicia plays new character Kindzi, the 'alpha female' of the Omecs, just one of several new races you will find on SyFy's Defiance, the frontier-like town of the future where humans, aliens and mutants co-exist in fascinating, brutal and memorable stories. Series star Grant Bowler does his best to keep the peace as the local lawman.

"Kindzi is such a well written part, she's strong, dedicated, complicated, fiercely jealous,' says Nichole. And to make things more complicated she's in a physical loving relationship with her father, T'Ezgin (played by Conrad Coates). "They are the only two members of her race not in suspended animation, and will do anything they have to, to save their people." And you thought you had relationship problems. "Let's say she's good at her job, but horrendous at her personal life," says Galicia laughing. "It's possible to love something so much that you can crush and kill it."

In creating this new world producers Kevin Murphy et. al. wanted all of the new races to have a unique sound so they brought in David J Peterson, the same conlanger (a person who creates new languages from existing ones) to create them. "He created the Dothraki language on Game of Thrones. Here he's created five," Galicia says. Producer Murphy wanted the Kinuk'Aaz, Galicia's people, to be fierce, deadly and aggressive. Peterson said it's by the far the hardest language he's ever created.

So how do you speak Kinuk'Aaz? "T'ep k'ubgulet K'svon Denit Dzivi," she says easily with a series of clicks at each apostrophe. Easy, right? Her language is a combination of German, Zulu and Georgian. "I need a lot of hot tea with lemon on the set, my throat gets pretty raw," she says.

Five months of shooting in Toronto during the winter kept her busy along with physical training to maintain her warrior body. Her complaint? Not wanting to go outside in the sub zero weather. "One day it was negative 30 Celsius. I don't even know what that is in Fahrenheit, I don't think thermometers go that low, I'm too thin for that kind of weather!" 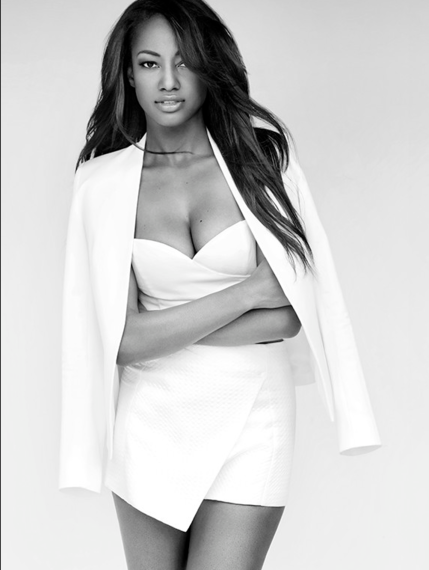 She worked with a voice tape she'd listen to constantly with variations of her lines and phonetics so she was always camera ready. "In the checkout line of the local store I'd answer in Kinuk'Aaz to see how I was doing." When people reacted as if she were a foreigner she knew she was doing well.

The head to toe purple make up makeover Galicia wore was a daily ritual that took several hours. It was silicon based make up, which is designed to stick. That's good when shooting a long day, but difficult when trying to take it off. "Good thing I started as a model, it tuned down my shame mechanism, so when I'm standing in my skivvies with two or three people scrubbing you off, it helps. It took 45 minutes to get the makeup off."

There are many races on Defiance each with their own language, the Irathians, the Indogene, Liberatas, Sensoths. Defiance brings a whole new universe of conflict and danger.

As Galicia's people are fierce and unforgiving there was no way to say "thank you," in Kinuk'Aaz. When she pointed that out, Peterson created a new word for it, based on Nichole's last name. So the Kinuk'Aaz way to say Galicia is now 'thank you."

Not many actresses get the chance to become alien warriors, let alone part of their own alien language.