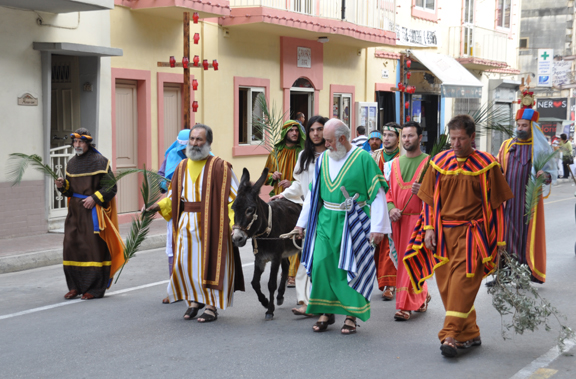 Throngs of people milled about to the strains of rousing music blaring through loudspeakers, and the atmosphere pulsated with anticipation. Bright-eyed toddlers sat atop their fathers' shoulders; gray-haired women leaned on their elbows at open windows and extended families filled wrought-iron balconies. Teenage boys with baseball caps askew chatted up young women in leather jackets and Jackie O sunglasses and middle-aged men stood off in the shadows with small cups of something strong.

A vendor in the tree-lined plaza did a brisk business selling plump, over-sized pretzels and heart-shaped pastries painted with frosting. A crowd spilled from the door of a social club onto the sidewalk, where rows of folding chairs were filled to capacity. Officious-looking men in suits looked at their watches and paced inside space marked off with yellow police tape.

And then, finally, they began to appear, led by a humble contingent in colorful, flowing robes, their feet in sandals and hands around palm branches, and in their midst a donkey. All of us who had been eagerly awaiting this moment were not disappointed, as wave after wave of elaborately-costumed men and women appeared, displaying regal bearings, proud faces, feathered headdresses, gleaming armor, some atop prancing horses. 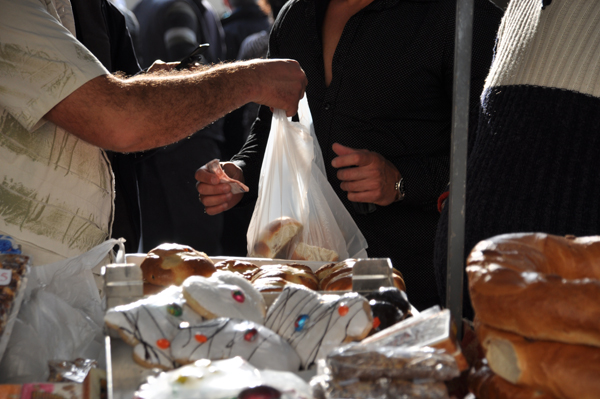 Yet the purple pageantry and palpable hum of excitement as the parade began to wind its way through the streets of Zebbug was tinged with a somber patina. Most of those gathered to watch the procession were dressed in black. Scanning the faces of the multitude assembled, I saw that their countenances were reverential rather than delighted, and deeply moved more than amused; some had tears in their eyes.

The emotion was evoked by the occasion -- this display was in commemoration of Good Friday.
Joe Pisani, one of several friends I made while on Malta, explained:

This is a unique exhibition which has been a Maltese tradition for many years. In such processions, they mingle characters and events of when Jesus was among the Jews and his exploits during his 33 years on Earth. The Good Friday procession depicts the last day of Christ, and symbolizes Jesus and the apostles greeted by the crowd when he entered Jerusalem on a donkey. They carry palms and olive tree branches to symbolize Jesus' prayers in the garden of Gethsemane.

All these events are depicted with the statues carried in the procession by volunteers, who pay the church to carry them. There are also people in chains and carrying heavy loads as penitence or to achieve a blessing from God, as they may have problems in life or sickness in the family."
Despite being only 17 miles by 9 miles, Malta has more than 365 churches -- the majority of the country's population is Catholic and it's said that four out of five Maltese regularly attend Mass. A lapsed Catholic myself, I had been drawn here by the prospect of photographing a spectacle. In the process, I had found myself humbled by the strong faith in evidence here -- not just in grand, symbolic expressions but woven in the fabric of day-to-day life. 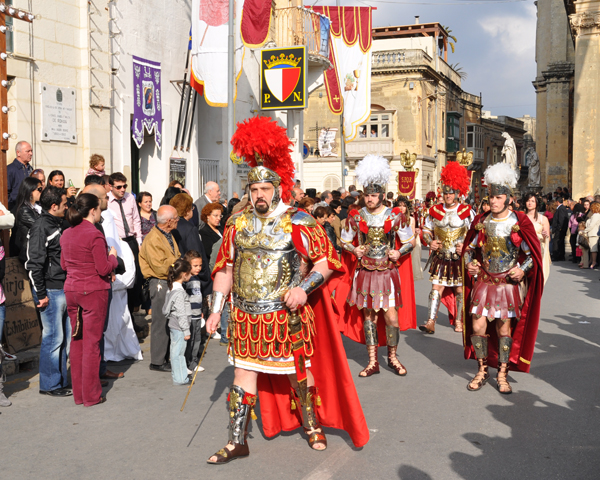 Earlier in the day I had wandered the streets of Vittoriosa, one of Malta's "Three Cities." While actually small towns, these communities adorn promontories that reach into the island's Grand Harbor. Inside the 16th century Church of St. Lawrence, I experienced a seismic shift in a long-held perception, with my view of the house of God as a place of hushed, penitent silence forever altered.

Amidst elaborate displays of religious art, the faithful paying their respects were not only alone in solitary prayer and contemplation, but communing with each other. Clusters of people congregated together across several rows of pews, engaged in animated conversation. A young couple proudly showed off a gurgling baby and elderly matrons leaning on canes checked on each other's health. Old friends hugged and a popular father made the rounds, with two sons in tow that were his spitting image.

The energy of the vibrant interaction was infectious and I emerged uplifted. I later learned that a strong tradition among the Maltese is visiting seven different churches on Good Friday, which denotes the seven sorrows of the Virgin Mary during the crucifixion of Jesus. With plenty of churches in close proximity, families typically walk to the seven churches and recite the Rosary on the way; sometimes families will make a day of it and drive to different churches in the villages and towns throughout Malta.

As I traversed the island, I saw signs displayed at churches proclaiming "Wirja," which in Malti means display or manifestation. In Vittoriosa, I decided to investigate. Passing through a thick red velvet curtain, I entered a dark, candle-lit church hall with an exhibit of the Last Supper that spanned two large adjoining rooms. I followed a father and his two youngsters as the long line of viewers wound past the extravagant display of figures of saints and apostles made from colored rice and salt. I found I was more engaged with watching the young man explaining the tableau to his wide-eyed children than focused on appreciating the detailed and delicate folk artistry laid out before us. The father's eyes met mine and we both smiled.

The grandeur and fanfare of Malta's Good Friday celebrations took my breath away. What I took home was the realization that I had come to Malta as an observer and left with a sense of belonging. 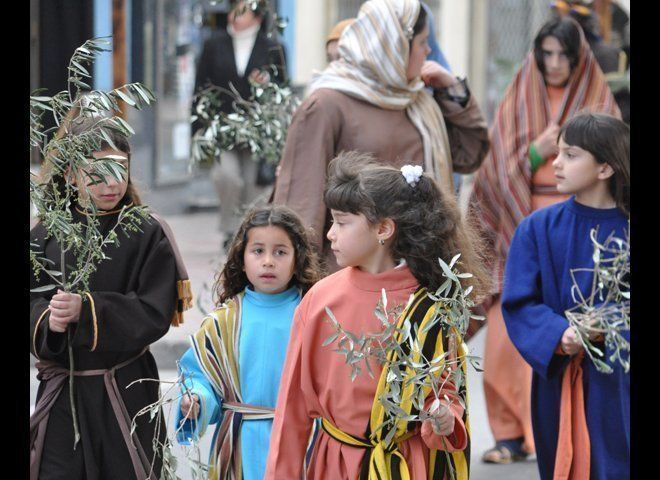