This is Part III in a series, Privatization of the Commons in Mayor Bloomberg's New York: 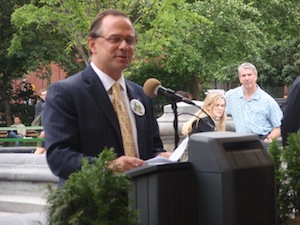 Recently, in a rather long interview with the New York Observer, former NYC Parks Commissioner Adrian Benepe said that during his ten-year tenure overseeing our city's public spaces and recreation areas, Mayor Michael Bloomberg never told him to seek out "public-private partnerships" to help fund maintenance and activities at New York City parks. He told the reporter that "the [Bloomberg] administration encouraged us to be creative."

Anyone following the issue of privatization of public space will agree that Adrian Benepe primarily relied on those public-private partnerships which were able to spread and increase their reach under his watch. Yes, he tried out a few real "creative" misses such as Chanel Park and others that I've mostly forgotten about by now but this was the one 'model' Benepe returned to again and again. (I do somewhat miss writing about the crazy tree-killing "public art" Waterfalls but technically that was not a Parks Department project nor part of the agency's arborcidal record under Benepe.)

What I haven't forgotten is how Commissioner Benepe during his time at the helm of the city agency didn't concern himself much with community sentiment. Instead, inevitably, he largely forced his and the Bloomberg Administration's agenda, against the public's wishes, with an emphasis on private and corporate money and influence changing and manipulating our public parks.

Examples include: the pending unwanted restaurant at Union Square Park, the dramatic redesign at Washington Square Park, allowing 1 1/2 parks and at least three hundred trees to be obliterated in the green space-deprived Bronx to pave the way (literally) for Yankee Stadium, handing over Randall's Island to a "sports foundation" (i.e., another "public-private partnership" whose executive director is also a Parks Department employee -- note to those following the whole Washington Square Park Conservancy saga), and, in the process, granting the approval of the axing of perhaps a thousand trees there on Randall's Island (no one seems to know what happened to all the wildlife living amidst those trees). And also annually allowing a huge portion to be closed off there for weeks to the public so Bloomberg L.P. could take it over and throw their annual summer carnival, I mean, company party there.

At a 2011 panel discussion on parks at which Benepe appeared, Geoffrey Croft of NYC Park Advocates noted, "It is the city's legal responsibility to maintain its park system which they are clearly not doing. The city continues to try and abdicate its responsibilities by entering in these agreements which the elected officials are allowing. Besides the enormous disparity these deals create, they also hand over an enormous power and decision and policy to these groups with little transparency and accountability on what is supposed to be public land."

Now, after almost a year of not really hearing too much about him, Benepe is back in the media. And what is the former Parks Commissioner here to tell us? Well, via a piece that he penned last Wednesday at The Huffington Post, how important public-private partnerships are and that they are "under attack." He says just because because there are vast inequities between parks in affluent neighborhoods and everywhere else, we shouldn't be telling anyone who wants to give, say, $100 million to one park, that that is somehow not fair.

Clearly, the Bloomberg Administration and Benepe himself -- he's been hired by the Trust for Public Land to implement this privatizing model across the country -- are very concerned about this movement calling to share the wealth with other parks and putting public-private partnerships under greater scrutiny.

Here's an excerpt from "Rebirth of America's Urban Parks is Spurred by Citizen Involvement, So Why is it Under Attack?" written by Adrian Benepe on The Huffington Post:

"The vast majority of parks are supported exclusively by public money, as they should be. While private contributions are important to local parks, even more crucial is the role that the citizen-led boards play as perpetual park guardians. Mayors and city councils and park commissioners (and their budgets) come and go, but citizens make sure the cities keep up their investment in parks. Public-private partnerships also bring entrepreneurial management techniques and creative funding mechanisms to park stewardship.

With hundreds of millions of dollars and tens of millions of volunteer labor hours donated across the nation every year, these efforts are crucial as Congress fails to provide funding and state and city governments confront budget shortfalls. New York City, with more than $165 million a year donated for parks, has been a model for other cities. But ironically, there are efforts there to curtail private philanthropy and handcuff public-private partnerships, a worrisome sign for people who use and care about city parks.

In the wake of a recent gift of $100 million to the Central Park Conservancy, there have been calls to force the more successful non-profit park organizations to turn over 20 percent of their contributions to be redistributed to other parks. Another proposal suggests that only publicly funded workers should clean parks. These arguments are based on a false premise that private contributions create a system of 'rich parks' and 'poor parks.'" 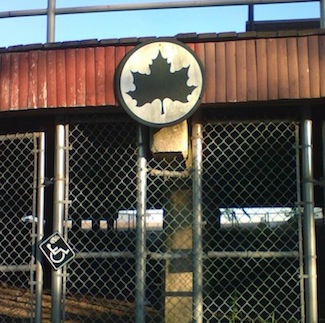 Adrian Benepe was a journalism major and he has always used his talent with words to manipulate the larger story, often successful because the media would largely report back much of what he spouted during his tenure. The title of his piece states that "citizen involvement" at our urban parks is "under attack" as if there is a movement to stop people from caring about their parks. Benepe wants you to know, that, if successful, this troublesome stand threatens to reverse the miraculous "rebirth" of our urban parks -- the rebirth that he claims credit for putting into place.

So, let me clarify what IS under attack -- for former Commissioner Benepe and others (note that on Twitter all the city's conservancies tweeted his piece!).

People are not against "citizen involvement" in our public spaces and a democratic process. They are against handing off control of our parks to the highest bidder. The public does not want to see some parks being prioritized over others. Parks are our commons and we should all be equal there.

There is no reason government agencies cannot manage and maintain city parks with the public's involvement and input. However, what is happening is that some city governments are relinquishing their responsibilities and entrusting private entities with the job of partially funding as well as running and maintaining urban parks. In return, these entities are allowed to significantly dictate what happens within these public spaces. This has had major repercussions in New York City in particular, some of which I outlined above.

NYC's former Parks Commissioner is conflating "citizen involvement" in our parks and public spaces with the private management and funding of them. These are two very different concepts and realities. 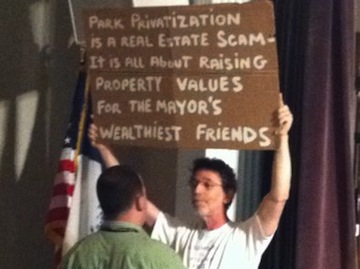 People are against parks being privatized, the commercialization and sanitizing of our parks, the overarching corporate influence on these public spaces, the public increasingly being denied access to their commons, the resulting lack of transparency and accountability, and so much more. THAT is what is "under attack," Mr. Benepe.

We need elected officials who will fund our parks properly.

We need to separate the private entities and their control of public space.

Before leaving his job as Parks Commissioner close to a year ago, Adrian Benepe was involved in meetings behind closed doors about the creation of a private conservancy at Washington Square Park. The surrounding community and park users had previously voiced opposition towards such a body at the famous Greenwich Village park. The existence of this entity was only recently revealed to the community at large. It is likely that the former city agency head is the one who told everyone involved to be 'hush-hush' about it.

(This conservancy, i.e., another public-private partnership for New York City, at Washington Square is in its infancy stage and the four founding members have insisted they are not really a conservancy despite having the packaging -- and name. It's just "every other name was taken," they've said. Were they just really well coached by former Parks Commissioner Benepe and will their role expand beyond "raising funds and planting flowers?" It remains to be seen.)

The fact that this article appeared here at the The Huffington Post and Adrian Benepe felt the need to answer critics alarmed with the effects of private influence and entities on our public parks -- the model he increasingly put into place in New York City -- shows that the problems are now evident to the public at large and the movement has gained significant traction. People are aware and want a new "creative" model for our public spaces -- one that reflects a democratic, fair, transparent and inclusive process.