Following the anger that quickly ensued after a Russian judge found punk band Pussy Riot guilty on hooliganism charges on Friday, New York City activists staged their support for the three female members of the band.

Six protestors were reportedly arrested for blocking traffic and wearing maks during the show of support.

Among protestors were Occupy Wall Street members and other free speech activists who organized a "punk prayer" session outside St. Nicholas Russian Orthodox Cathedral on the Upper East Side.

The Pussy Riot trial has provoked outrage from members of the international community who have condemned the harsh two-year sentencing handed down by Judge Marina Syrova on Friday.

The three women of Pussy Riot were arrested in March after staging an anti-Putin performance at Moscow's main cathedral, where they sang lyrics begging the Orthodox Church to save Russia from President Vladimir Putin.

Since the arrest, a global campaign, which included many high-profile names like Paul McCartney and Bjork, voiced their condemnation of the charges.

On the eve of Friday's verdict, a group of musicians, supporters and feminists organized a reading at the Ace Hotel in New York to also show their support for the young women. Karen Finley and Chloë Sevigny were also in attendance. 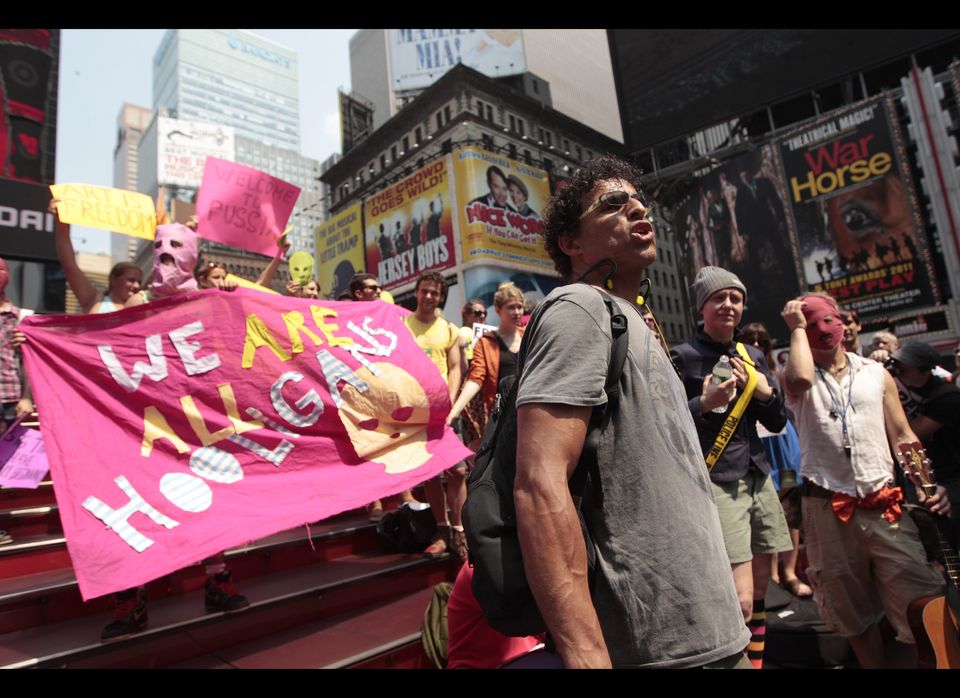 1 / 6
Protesters rally during a demonstration in support of Russian punk band Pussy Riot, Friday, Aug. 17, 2012 in New York's Times Square. A Russian judge found three members of the provocative punk band guilty of hooliganism on Friday, in one of the most closely watched cases in recent Russian history. The judge said the three band members committed hooliganism driven by religious hatred and offending religious believers. The three were arrested in March after a guerrilla performance in Moscow's main cathedral calling for the Virgin Mary to protect Russia against Vladimir Putin, who was elected to a new term as Russia's president a few days later. (AP Photo/Mary Altaffer)
AP