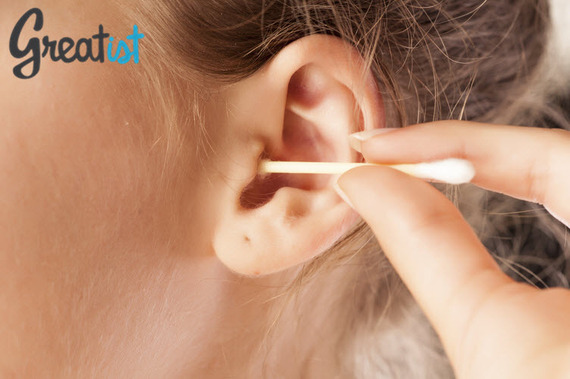 Earwax is one of those annoying facts of life, and for many of us, Q-tips are a satisfying way to get the gunk out. But we've been on edge ever since seeing Hannah Horvath's Q-tip incident on Girls (shudder), so we reached out to ear, nose, and throat doctors to find the best way to get that pesky earwax out, without any permanent damage.

RELATED: The Shocking Truth About Tampons

The consensus? As much as we love that so fresh, so clean feeling, if you have any willpower, wean yourself off cotton swabs. They do much more harm than good, and excessive ear cleaning will almost certainly land you in the doctor's office, says Leon Chen, M.D., an ear, nose, and throat doctor at Manhattan's ENT and Allergy Associates. While you may see a satisfying bit of yellow on the cotton bud, chances are you're actually pushing most of the wax deeper into your ear canal, past where it's naturally produced (and ideally should stay).

Earwax also holds antibiotic and antifugal properties, and too much cleaning can lead to ear and skin complications down the road, from ear infections to eczema in the outer ear, says Dale Tylor, M.D., a pediatric and general otolaryngologist at Washington Township Medical Foundation in Fremont, CA. Even more concerning, she adds it's pretty common to see patients who've poked a hole through their eardrum after using cotton swabs.

RELATED: The Doctor-Approved Way to Pop a Pimple

But we're not exactly known for our willpower. So if you really, truly can't cut it cold turkey, limit your cleaning to three times per month, Tylor says. To avoid any Horvath-like mishaps, only clean after a shower since the heat causes the wax to melt. Line up a fingernail at the point where the cotton meets the Q-tip stick--this will be your safeguard to make sure you don't go too deep. Gently wipe inside your ear, and try not to obsess over whether there's any earwax left.

RELATED: Find Out Why 60% of Gynecologists Use an IUD (and How to Decide if You Should Too)

To avoid the scenario altogether, she advises people ditch Q-tips and go for an oil and hydrogen peroxide routine instead. Once a week before bedtime, fill an eyedropper with olive, mineral, or baby oil. Put up to three drops inside each ear, and massage the triangle of cartilage that covers your ear to coat your ear canal. Follow up with a cotton ball to keep the oil off your pillowcase. The next day when you're in the shower, place hydrogen peroxide on your hand and rub it into your ear. The peroxide will bubble out, taking the softened wax with it and leaving you wax- and worry-free.

When's the Best Time to Shower: Morning or Night?

The Ultimate Guide to Decoding Your Blood Test Results

How to Stop Every Kind of Headache ASAP

What Grieving People Really Want During The Holidays This Year