Russian former oil tycoon Mikhail Khodorkovsky was arrested in 2003 after criticizing President Vladimir Putin and spent 11 years in prison. In recent months, he has re-emerged in the public as a leader in a renewed opposition aimed at replacing Putin and bringing democracy to Russia.

European security today is facing its most serious challenge since the end of World War II. In essence, Russia's open annexation of Crimea and its barely concealed annexation of part of Ukraine are marking the end of the post-World War II world order.

War cannot be a way of resolving territorial disputes in Europe. It is a matter of principle -- not of the fairness of the situation.

The Russian government has once again opened up Pandora's box and unleashed a threat that has already laid waste to the European continent many times before. Moreover, when it comes to the question of territorial claims, Russia is actually more vulnerable than other countries, not less.

The Kremlin leadership's goal is far from geopolitical. It merely wants to return to a foreign policy comfort zone in which no external factors can be a threat to the regime's existence.

The extent of the Kremlin regime's hopes is a return to the Helsinki Accords, only without the third package concerning human rights. This is an attempt to affect an overhaul of European history not from the moment of the fall of the Berlin Wall, but 15 years further back -- an attempt to make adjustments to the policy of "detente." The Kremlin wants to return to the policy of peaceful coexistence with total non-interference in its "internal affairs." It expects recognition of the Kremlin's right to do anything it wants in what it considers to be its "zone of influence."

As old-fashioned as this doctrine may seem, it represents a serious danger for Europe. Russia remains a country with a colossal military potential, sufficient to destroy all of humanity many times over. In case anybody has forgotten about this, the Kremlin is ready to remind us today. This huge military potential, which is doubtless going to continue to exist for a long time yet, has proven to be under the control of people with an extremely low level of political and moral accountability. A quick and easy way out of the situation that has emerged therefore does not exist.

Despite the obvious wrongfulness of the aggression perpetrated against Ukraine, Europe is going to have to look for a compromise in relations with the Kremlin regime because the alternative to compromise is global war. This is an objective reality that cannot simply be brushed aside. But, as a famous 20th century Russian political figure once said, there are compromises and then there are compromises. A policy of "appeasing the Kremlin" is a path that will lead to a big war far more quickly than it seems to many European politicians and businessmen who are disposed to conformism.

COUNTING ON THE DEMISE OF EUROPE

In the Kremlin and around the Kremlin today, there are more and more people who are candidly counting on a rapid "demise of Europe" in consequence of a full-scale political and economic crisis. They are seriously hoping that, for example, Great Britain's withdrawal from the E.U. or the default of one of the Schengen Treaty countries will lead to the collapse of the eurozone and to the appearance in Europe of acute contradictions along North/South and East/West fault lines. In this case, every effort will be made to make sure that the dividing line of the political watershed will pass not along the course of the Northern Donets, but once again along the Vistula and the Oder.

The hawks in the Kremlin are not simply waiting for a crisis to happen in Europe. They are prepared to actively contribute to its appearance, notwithstanding even the fact that the new world global economic crisis would be deadly for the Russian economy. Nevertheless, there is a great likelihood that the Kremlin is going to be shaking Europe to the best of its abilities.

Strange as it may seem, inside-out Trotskyite ideas about permanent revolution are popular in Russia once again -- only now with an ultra-right, nationalistic tinge. They dream of creating a new international ultra-right, which would unite all the reactionary and anti-liberal forces of Europe.

"The hawks in the Kremlin are not simply waiting for a crisis to happen in Europe. They are prepared to actively contribute to its appearance."

Truth be told, Putin has already begun to wage a "big psychological war" against Europe, increasing his propaganda and agent-of-corruption influence here. To curb such expansion will demand of Europe a serious mobilization of forces. This is a new cold war, and it is not something that will go away in one year.

Is there hope of being able to effectively deal with this threat? There is, and it stems from the very nature of the Russian bureaucracy, which is generally rational and apolitical. There are many people in the Russian establishment who are sober-minded, think rationally and, on the whole, are oriented towards European values. But today these people are being forced to submit to a political will that has been formulated by a criminally corrupt minority whose only goal is to hold on to power. The majority of the Russian elite understands perfectly well that the Kremlin's course today is leading the country to catastrophe. This majority is the restraining premise that must not allow Russia -- and the whole world along with it -- to slide into the abyss.

"There are many people in the Russian establishment who are sober-minded, think rationally and, on the whole, are oriented towards European values."

Today, Russia's neo-totalitarian regime has left no place for anyone who thinks differently. Confusion reigns in the Russian opposition because mechanisms to legitimately come to power do not currently exist. However, the current goal of the opposition in Russia consists not of coming to power -- such a goal is unattainable for now -- but of serving as a restraining factor for the reactionary forces that are prodding the Kremlin and could lead to global confrontation. How balanced the Kremlin's domestic and foreign policy will be depends in large part on how big and how organized the opposition is -- on how principled a position it will be able to take. Today, the opposition in Russia is fighting not only for Russia but for all of Europe. It is precisely for this reason that its efforts deserve to have serious support.

DON'T PUSH RUSSIANS AWAY FROM EUROPE

What then can real Russian patriots who do not agree with the "Putin doctrine" realistically expect from Europe?

It would be desirable if Europe's policy was: a) intelligent b) honest c) differentiated.

When I say that Europe's policy has got to be intelligent, I mean, first and foremost, realism in understanding the fact that Russia and Putin are not one and the same thing. That is, sooner or later, Putin will be gone but Russia will remain and is going to have to find a place in greater Europe. Perhaps the phenomenon of Putin actually emerged precisely because this place was not determined quite the way it should have been after the fall of the Berlin wall. The question needs to be broken up into two parts: Russia and Europe -- that is one thing; Putin and Europe -- that is something else.

"Inside-out Trotskyite ideas about permanent revolution are popular in Russia once again -- only now with an ultra-right, nationalistic tinge."

When I say that the policy has to be honest, I am urging that we not resort to simplifications, painting life in Russia in black-and-white colors, in a caricature style. I am likewise urging that double standards not be applied in relation to events taking place in Russia. Russia should not be forgiven for things that another would not be forgiven for; likewise, Russia should not be denounced for things that are normal for others.

When I speak of a differentiated approach, I mean, first and foremost, that sanctions need to be both intelligent and honest.

My friends, who also oppose Putin's regime, convince me not to speak against sanctions because they believe that this is what restrains the aggressive behavior of the Kremlin today. I agree with this but I consider the application of sanctions against Russia as a country to be a big political mistake. The logic that -- "If life gets worse for the Russian people after sanctions, they will understand more quickly just what bad rulers they have" -- is absolutely senseless.

"The Russian people must not be pushed away from Europe."

The Russian people must not be pushed away from Europe. But it is necessary to be much tougher in everything that concerns targeted sanctions aimed against corrupt officials, law enforcers and their business partners. Yet very little is being done now in this area. Accordingly, three important measures must be taken:

1) Cultural, scientific and educational exchange between Russia and Europe must protected and promoted. It does not matter what noble motives may be guiding those who are proposing restrictions and prohibitions in the fields of culture, education or science. Cultural ties between Russia and Europe must be protected. And Putin supporters like the singer Joseph Kobzon have the right to participate in them too, by the way. Let him re-educate himself by looking at Europe.

We need to promote the growth of scholarly and cultural exchanges, especially among the new generation. This is the guarantee of the future victory of the European choice.

2) Within Europe, the Russian opposition needs to be protected from persecution and Russian political manhunts. As the world discusses sanctions, Putin is welcoming the head of Interpol in the Kremlin and, in essence, thanking him for assisting in the struggle against the opposition. Corrupt officials, barely concealing that they are agents of the secret police, use stolen money to hire the best European lawyers to attack human rights advocates.

European courts matter-of-factly agree to hear falsified decisions of Russian courts that are merely the sword of a repressive system. This takes place even when other courts of European countries have already spoken, for example, with respect to a question of extradition.

3) Within Europe, there needs to be a wall up against the Kremlin regime's corrupt activity. It is unacceptable when the rulers of a de facto totalitarian state practically openly finance their supporters here, in Europe, with money stolen from our people. This not only undermines unity, it also creates the wrong impression of Europe in the eyes of the Russian liberal opposition. If everything can be bought, then where are the ideals for the sake of which we are wasting our lives?

I know today's regime is not eternal. It probably has no more than 10 years left -- maybe much less. How much damage it can cause in this time and what will come after it depends on our joint efforts.

Khodorkovsky delivered these remarks (abridged by The WorldPost) to the European Union on Dec. 2.

In Response to Putin's New Cold War, the West Must Be Warm to the Russian People
Putin Digs Adventure 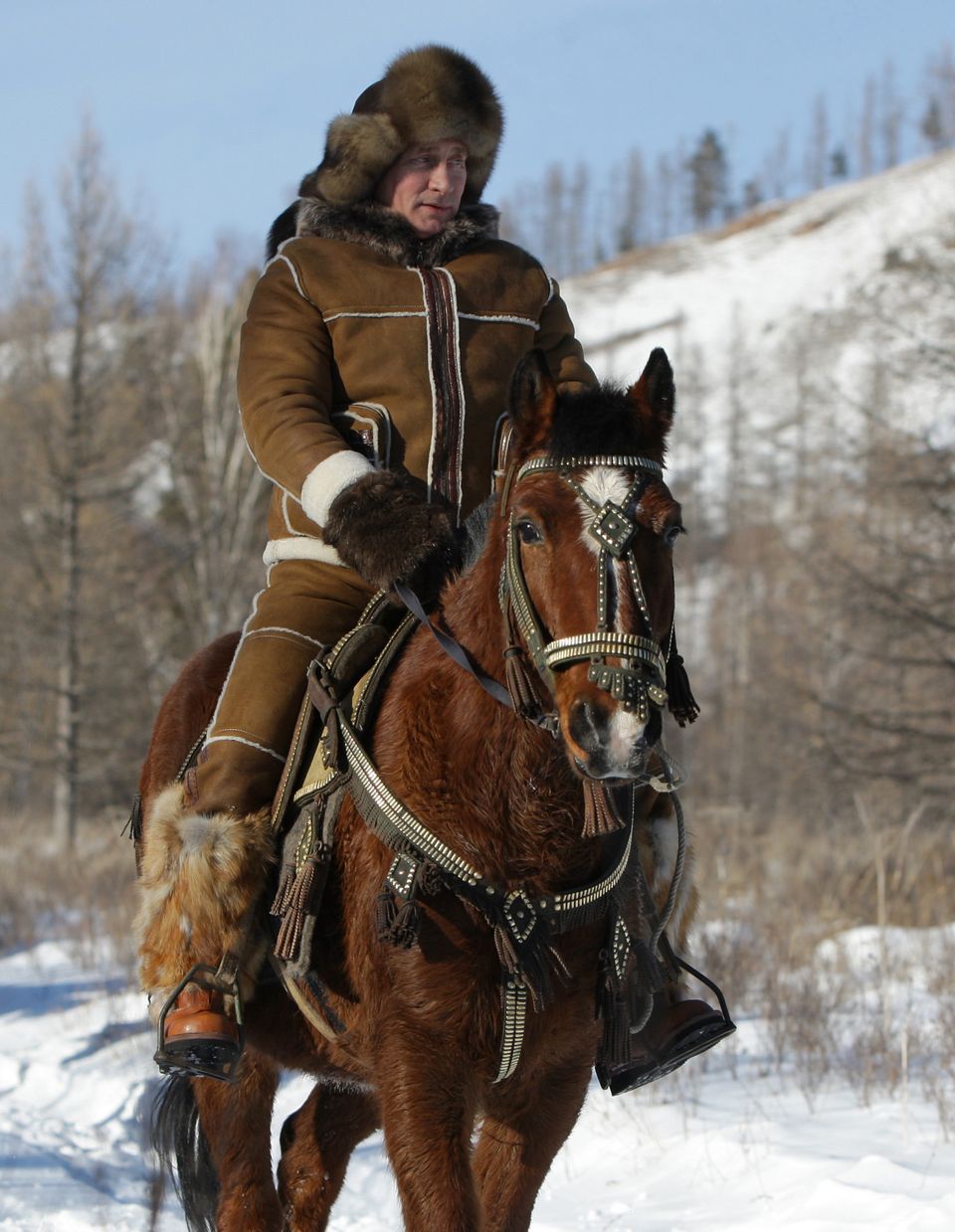