MOSCOW, RUSSIA -- At an early morning press conference, Russian President Vladimir Putin told reporters that he has "major, major butterflies" about starting a new relationship with American President-Elect Donald Trump, but that the two have already agreed to "take it slowly, one step at a time."

"And we're saving ourselves for our inauguration day," Putin almost yelled into the microphones on his podium, barely containing his excitement, "because we really want it to mean something real. Something special."

Putin said he and Trump have already made several plans for getaways and retreats with each other. He said that both men agree that "spending good, quality time together as much as possible early on" in a relationship is the best way to establish one with one another.

"We both agreed we want our intimacy to be the central bedrock on which we build our leader-of-state-mance," Putin said, coining a term as he spoke, adding, "and while we know the anticipation and build-up might be really hard to handle, we really both are on the same page and just want to hold off until that special day." 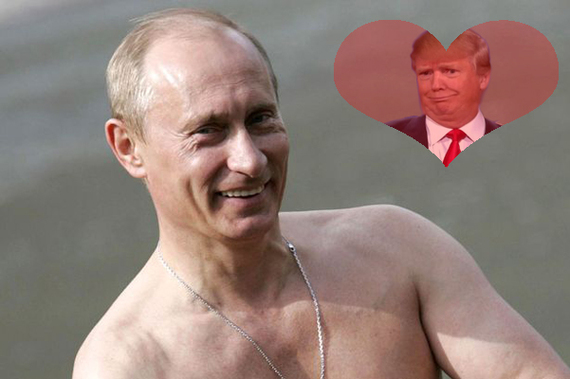 President Putin said that while Trump eventually went along with the idea, he did have to convince the alleged-billionaire to hold out to consummate their diplomatic relationship.

"He kept telling me it really hurts to go almost all the way during the campaign," Putin said, "only to stop before we get all the way there. But I told him that the best things come to those who wait. He tried to tell me if I loved him I'd go all the way now, but I told him to wait until the Constitution tells us it's the best time, then we can do it all the time, all over the place. By 'it' I of course mean hold high-powered summits of course."

Though Trump did capitulate and agree to the plan for presidential abstinence, it wasn't without some attempts to get what he wanted regardless.

"He tried to grab me by my kitty cat, I think is how you say it in English," Putin said, "and he said he was afraid of losing it if we didn't use it. But I just kept on point, kept gently nudging him toward what I wanted, and he eventually rolled right over. That's one of my favorite things about Don. He just rolls right over whenever I want him to. Something tells me I'm going to really like that about him over the next few years."

Putin said that while he and Trump want to stay as "monogamously committed to each other" they both were willing to "spice it up" from time to time.