Former UNLV basketball coach Jerry Tarkanian was once famously quoted as saying, "The NCAA is so mad at the University of Kentucky that they're going to put Cleveland State on probation for two more years." It's an analogy that could apply to Russian President Vladimir Putin, who is punishing Syria for his failures in Ukraine.

The NCAA was too afraid to punish the historically prestigious Kentucky Wildcats for breaking the rules. So they went after the little-known Cleveland State Vikings for their infractions with a vengeance, knowing there would be little outcry from fans and powerful alumni if the team was blocked from the postseason tournament for several seasons. Sometimes you beat up on a weaker foe because you can't stop a stronger rival.

Over the past few years, Vladimir Putin, the subject of a feature today by Yahoo News, seemed to be the man with everything. He broke off a chunk of the Republic of Georgia without so much as a peep from the Bush Administration, then took Crimea from Ukraine. He backed Ukraine separatists who were on the verge of seizing the country, put forces on the borders of other states, and seemed poised to make the Black Sea and Baltic Sea a pair of Russian lakes. He even won admiration from several prominent Republicans for his leadership style. 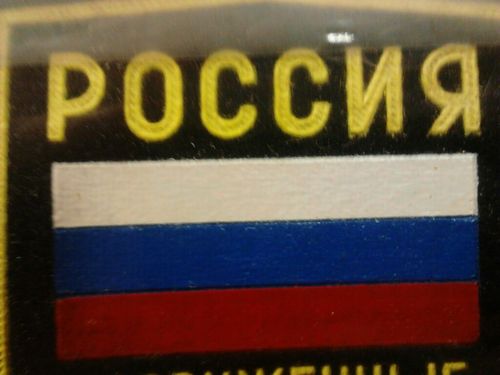 Russian patch. Photo by the author.

But the war in Ukraine isn't going so well. The separatists he supports downed a Malaysian jet. Sanctions imposed by the Obama Administration and the West are hurting the Russian economy. As Adrian Karatnycky and Alexander J. Motyl write:

The Kremlin's war in Ukraine is turning into a quagmire. Militarily, it is a stalemate -- which, given the vast imbalance between Russian and Ukrainian capabilities, amounts to a Ukrainian victory. Ideologically, the war is a bust, as the Kremlin's hopes of converting southeastern Ukraine into "New Russia" have been effectively, and perhaps permanently, shattered. Economically, the war and occupation of both Crimea and the Donbas have imposed ruinous costs on Russia, whose economy has already been battered by declining global commodity prices and Western sanctions. Socially, both regions are on the verge of a humanitarian catastrophe for which Russia would be blamed. In sum, Putin's plans of weakening Ukraine have backfired. Ukraine is slowly getting stronger, while Russia is getting weaker.

In South Ossetia, near Georgia, the Kremlin is backing away from a Crimea-style vote for the region, claiming they don't want to disrupt ties with Georgia, the same country they attacked in a war in 2008. What they really don't want to do is lose a vote. South Ossetia voted to join Russia in 1992, but the resident chose independence in 2006. A lost vote would be humiliating for Putin, so it's not worth having.

Nobody in East Europe is falling for Putin's combination of charm and intimidation. Estonia just beefed up its base in Amari for bigger NATO planes. And Belarus, one of the only countries still friends with Russia in the region, did have their Kremlin-supported candidate start his third decade of autocratic rule. But Belarus is the worst performer of any Ex-USSR country in economic terms, according to the IMF. They are also responding more to a Western public relations offensive, sure to anger the sanction-riddled Russians who can't help nearly as much.

So Putin is trying to burnish his credentials as an international tough guy in Syria, fighting ISIS, or at least appearing to do so. In reality, he seems to be directing bombs against dictator Bashar al-Assad's beleaguered opposition these days. The Russian leader is doing it, because that's just about all he can do these days.

And with the possible bombing of a Russian jet, even that might raise an eyebrow among Putin's most loyal supporters at home.