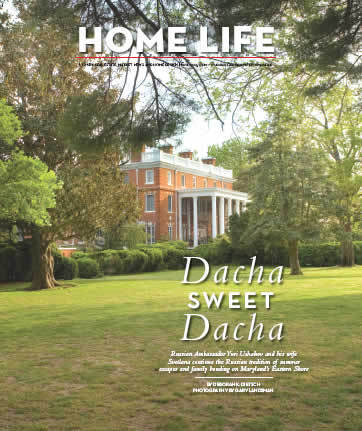 The Obama Administration (yes, it still exists), after weighing all evidence presented by the CIA and other government-investigative agencies, has imposed sanctions on Russia for hacking into the DNC website. Thirty-five Russian diplomats have been expelled, and two facilities used for intelligence-gathering have been closed.

One of these facilities is a so-called dacha on the Eastern shore of Maryland. Washington Life Magazine had written a story about the getaway, titled "Dacha Sweet Dacha." The lead sentence was "Russian Ambassador Yuri Ushakov and his wife Svetlana continue the Russian tradition of summer escapes and family bonding on Maryland's Eastern Shore."

There followed a lovely description of the residence and its residents, noting that the dacha gave the ambassador and his wife "the chance to spend time with their 10-year-old grandson Misha, grilling shashlik (Russian shish kebob), with friends, or relaxing in the bania, Russian for steam room...Because we have such a hectic life in Washington, we need a place to hide for a while," says Ushakova on a recent tour of the dacha, accompanied by Simon, her west highland terrier."

Sweet dacha, even sweeter grandparents. LBL is sure that the dog is weet, as well. But, since it now turns out that The Ushakovs were living in a place that was home to a spy operation, Life in the Boomer Lane hereby releases an interview not recorded in the Washington article, between Deborah Kdietsch, the author of the article, and the Ushakovs.

Kdietsch: Thanks so much for allowing me to see your home. I'm wondering why there are bars all over the windows and doors.

K: But mosquitoes are tiny. Aren'r these bars too large? The mosquitoes can still come in.

K: I guess that makes sense. How about the large room filled with computers and electronic equipment?
YU: Misha.

TU: Our grandson. He luffs computers, plays dose silly games all dee time. But vee luff him, so vee buy him all dee equipment.

K: I noticed that there are men in the room, sitting in front of the computer screens.

K: Geek Squad? That must be very expensive. I would think your grandson, being ten-years-old, would be an expert in how to use computers properly.

TU: She luffs eBay. I can't keep her off. Always the buying and selling.

Svetlana Ushakova: I get dee good deals! And I make dee good money!

K: Is that why there is an armored truck outside?

SU: UPS! Dey are delifering a package! I luff packages! I get dem every day!

K: OK, one last question. There is an annex to the house with a steel door. The door has an electronic entry system. What's that about?

K: So the room is empty now?

K: You are wonderful grandparents. And thanks for showing me the dacha.

TU: You are velcome. Be careful vhen you leaf, please. Don't look up at dee roof or make sudden movement. Don't vant to haf dee guys tink you are a mosquito.

In a related development, the New York Times reports that "President-elect Donald J. Trump edged away on Thursday from his dismissive stance on American assessments of Russian hacking, saying he would meet with intelligence officials next week 'to be updated on the facts' after the Obama administration announced sanctions against Moscow."

Kellyanne Conway, distressed that PEOTUS had inadvertently used the word "facts," issued an immediate response: "We want to assure the American people that we will continue to stand by our belief that facts get in the way of effective government."