The coverage and commentary about events in Ukraine have exhibited the worst of the herd instincts of Western journalism. The pro-Putin/Russian camp and the anti-Putin/Russian camp have painted two absolutely divergent narratives. For the pros, it's an anti-democratic, fascist putsch. For the antis, it's a peoples national liberation movement.

A plague, if you will, on both your houses. A special mention to an awful op-ed piece in Sunday's Times (Putin's Phantom Pogroms) asserting that anti-Semitism in Ukraine is a Putin fiction.

I take no position, at least here, on the course of events in Ukraine. But anyone who dismisses the resurgence of Nazism in the former Soviet Union is, well, doing a disservice to the truth, historical memory and the Jewish community.

The history and severity of anti-Semitism in Ukraine is of such enormity as to touch millions across the world. Much of the great Jewish migration (including my own family whose name attaches to the great synagogues in Kiev and Odessa) came from systematic murder and pillage of Jewish communities in Ukraine. The WWII murder by Ukrainians of Ukrainian Jews is in the hundreds of thousands or millions depending on who you believe.

And, across the old Soviet Union and Europe, it's back. In Russia, in Hungary, in Greece, in the Baltic states, in Ukraine it grows as Nazi and neo-Nazi political parties elect members of parliaments and uncover the icons and vocabulary of 1936.

Full disclosure: I'm active in an organization called World Without Nazism which has for years been trying to get the world to pay attention to the new resurgence of Nazism. I've been to Moscow, Strasbourg and Latvia watching it happen, and to Washington to rouse an American response. It's not a phantom, it's real. And if Putin, for all his authoritarian and political agendas, is calling it out in Ukraine, Russia and elsewhere, that's a good thing.

Ukraine is not an anti-Semitic state. It's people have political views that range from Stalinist to neo-Nazi to liberal democrats. The Maidan uprising has a legitimacy all it's own, as do the aspirations of other elements of Ukrainian society. And armed invasions are not the solution to this kind of internal conflict. 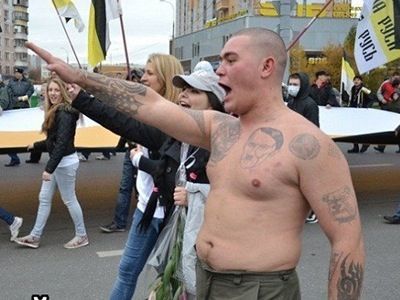 But Nazism is resurgent across Europe, including Ukraine and Russia, and Vladimir Putin has every right and obligation to name it and condemn it. So do we all.