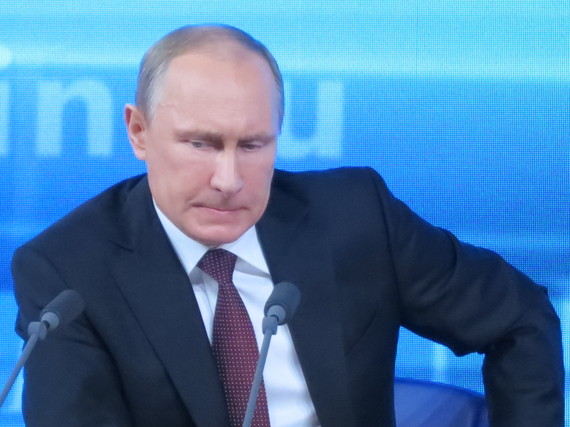 Kremlinologists are back, and they're feuding as usual, this time over Vladimir Putin.

During the Cold War, those expert Russia watchers were the guys (almost all of them were men) who could name that mystery man in the ill-fitting suit and fedora, standing in the reviewing stands on Lenin's Mausoleum, watching the missiles in the May Day Parade.

But after the Soviet collapse in 1991 the need for that kind of expertise disappeared and Kremlinologists went back to their think tanks and universities. The Communist threat was gone. Russia became, well, boring.

Now, thanks to Vladimir Putin and the conflict in Ukraine, Russia watchers, once again, are a red-hot commodity, appearing as guests on American TV networks, trying to explain to confused anchors why Putin's doing what he's doing.

But the revival of Kremlinology also has resurrected old quarrels between experts who see the world through Russian eyes and those who think the Soviet Union never really ended.

"We're not a very collegial bunch," says Georgetown University's Angela Stent, author of The Limits of Partnership: U.S.-Russian Relations in the Twenty-First Century. Stent falls in the middle of the Kremlinologist spectrum: those who understand but don't condone.

"There are a lot of very sharp elbows there," she says, "and there's quite a lot of infighting and suspicion in this group." She laughs: "Maybe just reflective of the country and system we're studying!"

Some of the sharpest elbows belong to Stephen Cohen, professor at New York University and Princeton. Cohen is one of a tiny minority of American experts who defend Putin's actions in Ukraine and his views have brought down the wrath of other Russia watchers. Google Cohen and you'll find links like "The Pathetic Lives of Putin's American Dupes" and "Meet Vladimir Putin's American Apologist."

This week, at a U.S.-Russia conference in Washington, an exasperated Cohen told the audience he's had enough of his "character assassins." Lambasting what he called America's "new Cold Warriors," Cohen accused them of "Russophobia" and "demonizing" of Vladimir Putin. "They are trying to stigmatize us so that we're not welcome on mainstream television," he said, "and they have largely succeeded."

Cohen and I actually did appear together on a live broadcast from Kiev this spring by CNN's Anderson Cooper but after that, he claims, he was persona non grata in the U.S. media. As Cohen sees it, he's like a dissident in the old Soviet Union. "Silence today is no longer a patriotic option!" he says. "Moderation in a time of such crisis is no virtue!"

"They are trying to stigmatize us, or me, and other like me. We are the patriots of American national security! It is we who understand the dire consequences of this policy, this American policy... If nothing else, this policy is costing Washington its most essential partner in vital areas of national security, the president of Russia."

Cohen, says Angela Stent, has drawn attention because he "consistently argues the Kremlin case" and cites facts that the majority of western Russia watchers dispute. "I would say that there are experts, and I put myself in this group," she says, "that understand why Putin did this and what his goals are but I think most of those people would also not justify them. The difference is what Steve Cohen does is not only understand him, but he says Putin is right."

Meanwhile, Cohen has found a media outlet that welcomes his comments: Russia's English-language international network, RT. In an interview this week he blamed the U.S. for the confrontation with Russia, and Barack Obama for "pushing Putin away."

"I am convinced that the most essential partner for the American national security," he said, "in all of these areas from Iran to Syria, Afghanistan and beyond is the Kremlin, currently occupied by Putin. And the way the United States has treated Putin -- I would call it a betrayal of American national interest."