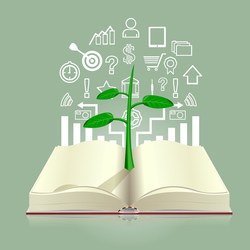 It's time to blog about returns. Not because it's a glamorous subject, but because it's an important piece of the book publishing business that too few authors (and readers) understand.

The fact that books are returnable in the first place is cause for frustration, and it should be cause for concern. I'm hard-pressed to think of another returns-based industry like book publishing. (Name one if you know one in the comments, please!) The fallout from being a returns-based industry is that retailers have little incentive to order what they think they can really sell, and publishers rarely push back on what might be perceived as unrealistic orders because they're desperate for a shot at getting their product in a position where it might really move.

As a small publisher (with authors investing in their own work to boot), I am cautious about Barnes & Noble, and outright against being carried in superstores like Target, Costco, or, god forbid, Walmart. Why? Not only do these stores take massive up-front buys at horribly steep discounts, but the product is returnable. I once worked on a book that went into Target, actually; they ordered 30,000 books at a 60 percent discount, meaning the publisher got 40 percent to divvy up between themselves and the author. Of course, the publisher held money against returns, because the likelihood that Target would return that book was very high. (Honestly, this was not a good gamble on the publisher's part.) Guess how many came back? 25,000 books. Those books were a write-off for the publisher. Pulped. Destroyed. But this little scenario is why I avoid any possibility for this type of massive (steeply discounted) order like the plague. It can sink a small publisher, and be devastating to an author.

Barnes & Noble isn't quite as bad as a superstore, but they still mostly take buys that they can't or won't sell through. ("Sell through" is the industry term for books that actually sell through the register, meaning a real sale.) It's maddening, because most authors want their books to be in B&N, and it's good for a book to have the "chance" to be in B&N, but their returns (on a given title) are often higher than 50 percent, when the industry standard is 30 percent. They're also notorious for sending back damaged books. I attended a panel at Pub U in Austin in April where one of the panelists joked that the guys packing up the pallets run over them with their forklifts for good measure, but the joke landed a little too bitterly. All the publishers in the room were frustrated by the lack of accountability from anyone anywhere -- bookstores, wholesalers, distributors -- when it comes to damaged books. The publisher eats it. End of story. And returns are only slightly less frustrating than damaged books. Yes, they go back into inventory, but we pay for that privilege, and then we have more inventory than we can sell, which eventually turns into excess inventory, which we have to pay to store.

Somewhere once upon a time, the notion that a book could or should be returnable was a good idea. I read but can't corroborate that Simon & Schuster came up with this idea to give themselves an edge on the competition -- and then it became industry standard. The problem with book publishing is that the world has changed, but the model is still the same stagnant one that gives massive cuts to retailers and allows them to return whatever they can't sell -- even though the most massive retailer out there (Amazon) is nimble and knows how to order what it will sell.

When B&N goes out of business, I desperately hope that book publishers will rally together to say no more to returns. Being a returns-based business is bad from every angle, and the damage to the environment should not be understated. We're printing more than we need. While books sit in warehouses not moving, inventory must be available to fulfill actual orders that are moving. This forces publishers to overprint, even publishers that are using print-on-demand technology.

Concerned publishers, authors, and readers can and should band together over this issue, but I fear it will take the fall of B&N and Amazon being reasonable (the prior an eventuality, the latter a near impossibility) for us to effect any change in this area. Understandably, small bookstores might be upset by this shift, but their returns are already (generally) relatively low, and they can do their part to reconceptualize the model, too.

Meanwhile, authors need to understand that you have to pay to play -- whether you're traditionally published or footing the print bill, it doesn't matter. Saying that you will not accept returns, or marking your self-published book as "non-returnable" is the kiss of death for your book. You don't want to do it because no bookstore will touch it, and you'll look like you don't know what you're doing. Yes, the returns are painful. All authors see the hold against returns, the negative sales in later quarters, and the sheer volume of books coming back from accounts that never needed to have ordered so many books in the first place. But look around you. Book publishing is changing, and authors and new publishers need to continue to be the disrupters. We need to stop putting up with this. The cost is not just on a publisher/author level; it's global.

When I posed the idea of starting a petition on this subject, one industry insider thought it couldn't make a difference -- that it would be like throwing a pebble in the ocean. And yet book publishing as it's going, with more titles every year, more inventory, more paper, is not sustainable.

Your thoughts? What will it take to change?