Putting coding on a par with the basic 'three Rs' is a trend in education-talk recently (Reading, Writing, Arithmetic, and Lately Coding, NYT, May 10, 2014). However, we know from years of research that its utility goes well beyond the "schoolish three Rs" or "a great job or even instant riches" some day in the future. In my view kids must become coders and digital media creators rather than just information receivers and videogame players, because computational inventiveness, visualization and modeling, toward which coding is one fundamental first step, is essential for success in a world in which digital communication increasingly dominates civil society, business and commerce, science, entertainment, and human interaction around some of our world's most pressing problems --climate change, water scarcity, terrorism and security, global education and health.

Unfortunately, what's missed by some of the featured debaters (e.g., Beverly Amico, Hadi Patrovi, Reshma Saujani, Room for Debate, NYT, May 13, 2014) is the key epistemological idea that developing a "computational-inventive mindset" allows kids to experience deep learning and thinking that are possible only when they participate in a learning culture where they are left to solve hard problems, imagine new solutions, ask questions, research and build things -- simulations, games, apps, models -- by themselves, about something that matters to them, through self-directed and self-organized collaboration using programmable tools.

Creating the model for such positively-rich learning goes back at least to 1985, when at MIT Seymour Papert and I first cast elementary-school kids as designers and programmers of software for instructing each other's mathematics learning, as part of my PhD research work at the Media Lab. In my book, Children Designers (1988; 1991) and our article, Software Design as a Learning Environment (1990), we explained and theorized based on data we collected how children showed the rich learning and capacity building that take place -- not just in their mathematical understanding and computational thinking but also in design thinking, and in constructing abstractions and representations -- by integrating computer programming into the larger task of creating instructional software, a teaching game, or a scientific simulation.

That was our vision about the power of coding in the 20th century. We then took it further into the 21st century. Since 2006, my company created Globaloria, a learning platform in which students learn to invent educational videogames on school topics in mathematics, science, history, or local issues in their community -- from initial conceptualization through designing, prototyping, play-testing, programming, editing, refining, and publishing. Knowing to do this well is quite hard. It can take 50 or even 100 hours to complete one simple game project. But that's the point. It gets kids to think about many disciplines and go deep into knowledge, fail, collaborate, recover, succeed. Next school year, we'll provide Globaloria courses to 15,000 students and educators in 12 states -- infusing the education systems with the all-important skills in STEM and computer science, and also in how to study with online resources, collaborate in person and virtually, solve complex design problems, work in teams, and represent knowledge through advanced computer programming projects -- starting young.

Our research findings over the past 25 years, including from the past decade, demonstrate that students perform better on school and state tests, motivated toward self-directed and collaborative learning, and improve their thinking and problem-solving skills, time management, presentational and interpersonal interactions, among other benefits.

In 1991, one of my Harvard Professors on developmental psychology wrote the following review about my PhD research on this topic:

Some of the limitations of contemporary schools are thrown into relief by Idit Harel's fascinating study called Children Designers. Too much is in words. Too much is passive. The child isn't just going to receive culture from us, the adults of the present; the grown-up child will own the society, will repair it, will strive in diverse ways to make it better. Perhaps if we could truly grasp and hold an image of the child as creator, the kind of image that rises out of this book, there would be a little less despair and crisis-mongering in contemporary discussions of education. - Sheldon White, Professor of Psychology, Harvard University, Children Designers book review)

At the same time, one of my MIT mentors, an architect, designer, inventor, and leading futurist of digital learning, wrote:

Frequently, the best way to understand something is to turn it upside down. Idit Harel's book does that to education. By putting the school system on its head, she provides a new perspective on learning, from where one sees the acquisition of knowledge as driven by a love for playing with ideas, rather than a duty to master them. I am reminded of the fact that an automobile driver remembers the road far better than a passenger. Harel puts children into the driver's seat." - Nicholas Negroponte, Professor of Media Technology, Director, The Media Lab, Massachusetts Institute of Technology.

To summarize, kids (and adults too) learn best by teaching, explaining, inventing and representing information to others. Coding is the new writing tool for young minds to do just that and especially well when integrated into a harder problem and a larger purpose, than learning coding for the sake of learning coding. 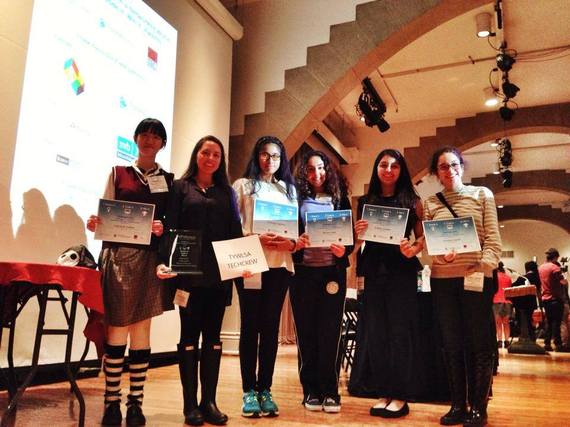 Globaloria students from The Young Women's Leadership School of Astoria were finalists of the High School division of Dream It. Code It. Win It. competition with their "Eco-friendly recycling game," they named, Code Green. Entitled MIT Media Lab, Google, Yahoo, Forbes Visionaries: Future of Innovation in a Networked World this competition is a software contest organized by MIT, and finalists were decided through votes on social media and a panel of judges. Finalists were awarded prizes at the Awards Ceremony in NY on May 1st, 2014, where the students got to meet distinguished influences such as Joi Ito (Director, MIT Media Lab) and Teresa Dahlberg (Cooper Union for the Advancement of Science and Art). In this photo (by Ling Loo), left to right: Reyhan Ayhan, Aldina Klapija, Valerie De La Rosa, Hemanjali Jagnanan, Geraldine Agredo, Daniela Leguisamo, Margot Richaud, Angela Diep, and their teacher Andrea Chaves.