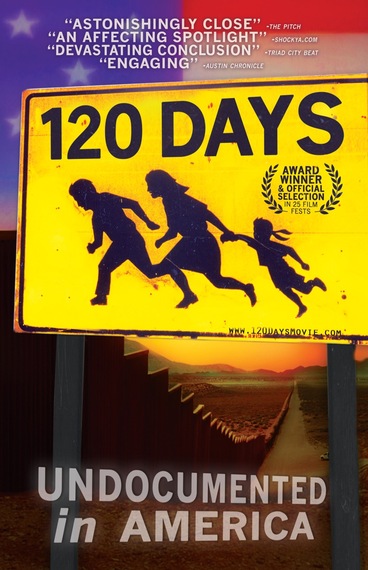 At the confluence of draconian American immigration policy, law enforcement entitlement, and good old-fashioned racial profiling we meet Miguel Cortes who, along with his family, is the subject of Ted Roach's new award-winning documentary 120 Days: Undocumented in America.

On a North Carolina winter's day, Miguel Cortes was driving to work with his wife when he was pulled over by a police officer who discovered Miguel was an undocumented resident, putting the wheels of his deportation back to Mexico in motion. Miguel was given one official option: accept a "voluntary deportation order" in which he would have 120 days to get his affairs in order before leaving the US of his own volition. He was also given several unofficial options: The family could move to a new city, change their names, and live as fugitives until his two daughters could finish their education in the United States. He could also follow the voluntary departure order and attempt to re-enter the country illegally, but this option came with risks of jail time, a huge fine, and proper deportation if caught, putting his entire family's life in the US in jeopardy as well. Because Miguel's wife Maria Luisa and daughters Yael and Saydrel were also undocumented, the chances of Miguel legally being able to return to the US were non-existent.

The ACLU and University of North Carolina note that these laws are being used to purge towns and cities of unwelcome immigrants in many North Carolina communities. Miguel was pulled over without cause, was never cited for a moving violation, and he's never been in any trouble with the law before. He just didn't have a driver's license, as licenses hadn't been available to undocumented immigrants in North Carolina since 2006.

Miguel Cortes was detained for a full week at Wake County Public Safety Center without proper access to a telephone or lawyer, and was poised to be deported in chains with a group of others when a friend of the family in Raleigh posted his bail of $5,000.

With the refugee crisis in Europe overtaking the news -- and of course the recent horrific attack on Paris -- it's easy to forget that just south of the US border people are also fleeing myriad forms of political and social violence but are not finding themselves as welcome or their plight even recognized when it comes to building a new life in the United States. 120 Days doesn't get into the socio-cultural issues that led to the Cortes family's departure from Mexico -- it doesn't need to. Organized crime and drug-related violence, the daily disappearances of women en masse, organized militias, government corruption, cartels, and so much more are already well-covered in the media. What 120 Days does provide is an intimate look into the daily lives of a family who would be considered a model American family, not just a model immigrant family, while they prepare to say goodbye to one of their own and as their lives in the United States will be irrevocably changed with the departure. 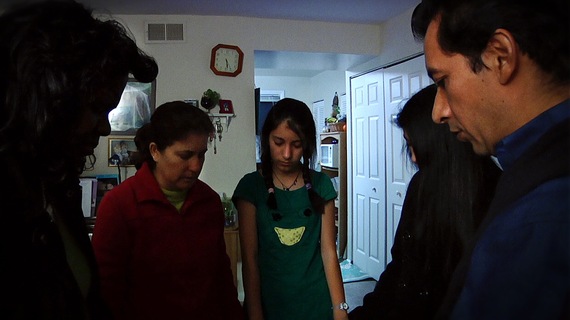 When talking with director Ted Roach about his passion project -- one that he's produced without studio assistance -- he tells me that one of the most popular questions he's asked about his film is, "Why don't people just come to the US legally?" Most American may not be aware that in order to get a work visa you need to be sponsored by a company who needs to prove that your skills are so specialized there isn't another American already in the country who could do the job. There is no chance for an unskilled laborers to get visas the official route. And having been an undocumented worker myself in pre-Schengen Zone Europe, I can vouch for how surprisingly easy it can be to build a life in another country without being a legal resident. We see this ease time and time again as we follow the Cortes family through their daily routine. Sure, you might not have access to everything a citizen has, and you might put money through tax towards services for which you'll never be eligible, but you manage with the knowledge that your life without those benefits is still better while undocumented than it would be back at home.

120 Days doesn't rely on any visual gimmicks or narrative tricks to paint a moving -- if heartbreaking -- portrait of the Cortes family and the happy life they'd built in the United States. Miguel worked in a retirement community as an attendant, his wife Maria Luisa cleaned houses, and their daughters Saydrel and Yael were both excellent students -- a scene in the film features Saydrel receiving a presidential academic merit award signed by President Obama. The family was heavily involved in their local church community, as well as being volunteers with the Raleigh Parks and Recreation Department offering free Mexican dance and music lessons. In fact, just one week before Miguel's voluntary departure order expired, he and his wife were given the Fred Fletcher award of the Raleigh Parks & Recreation Department for Outstanding Program Volunteer in a ceremony led by Raleigh's mayor. In the film Roach comments: "Here at the ceremony, one agency of the American government is recognizing a man for being an excellent citizen, while another branch wants to force him to leave the country. Apparently all the good deeds in the world cannot stop the machine that has been set in motion by one local policeman who was supposed to be using this agreement to pursue repeat offenders and dangerous criminals." 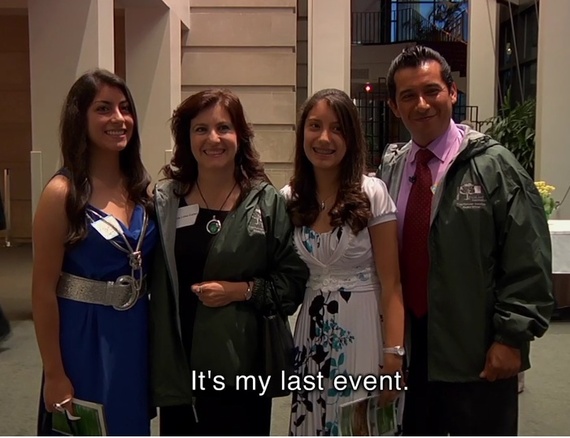 In the film Roach further notes: "When we hear the words undocumented or illegal most of us picture secretive immigrants hiding in the shadows like we hear on TV and the Internet. But this is not a family in hiding, they just don't broadcast their immigration status. ... The police and the courts can't be moved by his character. And the community organizers and officials can't know about his status, and no one in the audience can know that the Cortes family is here illegally, or that Miguel is facing deportation, so their perception of America's undocumented society won't be changed at all. One day Miguel and his family will just be gone, and most of the Americans he touched will never know why."

This is where 120 Days is so powerfully vital for current discussions about undocumented immigrants and immigration policy in this country: because it lifts the veil and gives us profound insights into the lives of an undocumented family. There are no criminals here, there is no violence, and nobody is on welfare or on drugs. There is only a loving family who came to this country for its opportunities -- for their own version of the American dream.

And you'd think that for a country like America which was founded by immigrants, it feels counter-intuitive that such large factions of citizens and corresponding politicians -- the majority of whom are descendants of immigrants themselves -- are actively against humane immigration conditions for the 3,000-8,000 migrant workers who arrive daily, many of whom are filling the niche jobs American citizens don't even want and wouldn't accept if offered.

Yes, the Cortes family came to the United States illegally in the harrowing way as do most immigrants from south of the border. But aside from that one misstep they were a model American family -- hardworking, community volunteers, no criminal record, with honor roll children, and dedicated members to their Christian church. Through the documentary we see how the Cortes family also personifies the millions of other hardworking recent immigrants in this country who aren't causing problems and aren't contributing to social unrest like conservative pundits would have us believe. For many undocumented workers, the only illegal thing they've ever done is move to the United States without a visa.

In an unassuming and beautifully subtle way, 120 Days not only highlights the cruel immigration system the US has in place, but also speaks to the need we have for sweeping reform that would allow fast-tracking families like the Corteses in their naturalization as American citizens. We must put a new framework in place that would grant exemptions for people like the Corteses, who left their American community more enriched than when they found it, and for whom a return to their home country would signify an enormous loss of quality of life and opportunities, not to mention leaving them vulnerable to the violent social conditions that plague their nation which prompted their flight in the first place. 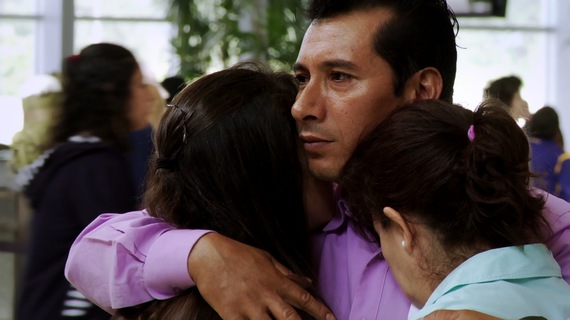 The film ends with a raw and intimate goodbye at the airport on the 120th day after Miguel received his voluntary departure order. As someone who has also done her fair share of goodbyeing at airports -- often never knowing if/when I would see the person again, or get caught by customs during my own time as an undocumented resident in Europe -- watching the Cortes family embrace and bid adios not only to Miguel, but to their life as a family in the US cracked my heart open so wide it spilled from my eyes. The Cortes's story -- like that of millions of others -- is gut-wrenching.

Not only should 120 Days be required viewing for every American -- and most especially those who view the world through the Fox News lens -- but this film is also a powerful teaching tool that would help the next generation of young Americans better understand the immigration debate from a middle ground uncolored by polarizing media spin. This film is also vital to political debates right now, as in the lead-up to the presidential election in 2016 many candidates have made reprehensible racist comments about the kind of people undocumented workers are, fueling a xenophobic hatred that will only lead to more violence.

120 Days takes the stereotype of undocumented workers as criminals and rapists and smashes it to bits.

To organize a community or school screening, or to watch the film online, please visit the 120 Days website. The film will also be available on demand on cable, and Netflix distribution is in the works.