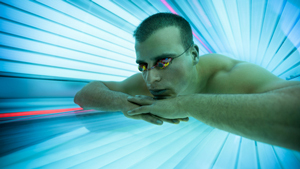 As a scientist, and a cancer survivor, I don't react well to the notion of "Cancer" being invoked purely for sensationalistic purposes. For a prime example, one need look no further than an FDA News Release, entitled "FDA proposes tanning bed age restrictions and other important safety measures." The specter of skin cancer against a backdrop of callow youth is very much in play.

While prudence is a virtue, wholesale age restrictions and draconian risk acknowledgement forms reek of regulatory overreach. Frankly, it is difficult to reconcile such borderline hysteria on tanning beds with the same FDA's bizarre practice of keeping many dangerous drugs legal, as long as a Black Box warning appears in the accompanying literature.

Sadly, with dozens of previously approved drugs taken off the market, the FDA is perhaps better suited to writing regulations, than actually protecting the public, in a meaningful proactive manner.

If a semi-annual risk acknowledgement form—as proposed by the FDA for tanning bed use—is such a good idea, one wonders why certain far greater risks do not trigger similar treatment. After all, if the subject is cancer, how about numero uno—in terms of deaths? That would be lung cancer, and smokers are 25 times more likely to develop lung cancer than non-smokers, not to mention a host of other diseases.

Then there's alcohol. In its Report on Carcinogens, the National Toxicology Program of the US Department of Health and Human Services lists consumption of alcoholic beverages as a known human carcinogen. Based on data from 2009, an estimated 3.5 percent of all cancer deaths in the United States (about 19,500 deaths) were alcohol related. Never mind auto accidents.

Oh wait...The Association for Safe International Road Travel (ASIRT) states that more than 37,000 people die in car crashes each year (in the US), while an additional 2.35 million suffer injuries or disabilities. That 37,000 includes more than 1600 people under age 15.

Why no semi-annual risk acknowledgment forms?

As to tanning beds, they're not just cosmetic. Vitamin D taken through the skin has been shown to remain longer in the human system than vitamin D taken orally through supplements and other non-natural products.

We must keep sensationalism out of public policy, or suffer the fate of the boy who cried "Wolf."