My husband has always been fascinated with North Korea. In his words, "It's probably the most different place on Earth. Like the Galapagos Islands... but for people."

I have to say, I never saw the appeal. To me, North Korea just seems cold... and depressing. The only way to access it is as part of an organized and strictly scripted tour, where assigned handlers whisk you down deserted streets, show you the same few monuments, and deposit you back to the single designated 'tourist hotel' in the capital. To me, travel is all about interacting with the people and the culture, and unfortunately in North Korea the price for seeking out such experiences is punished by detention, labor camps, and diplomatic incidents. No, thank you.

Still, it's hard not to harbor a curiosity for the hermit kingdom, which for decades has stood practically alone in staunch opposition to, and isolation from, the outside world. So, when my husband and I heard about a mysterious "Pyonyang Restaurant" in Ulaanbaatar, where we were staying a few nights on a recent trip, we were intrigued.

Apparently, North Korea owns a chain of over 100 Pyonyang Restaurants across a dozen or so countries that have diplomatic ties with its government (for those not up on North Korean geography, Pyonyang is the name of the capital). In addition to Mongolia, there are Pyonyangs in Thailand, Cambodia, Vietnam, Indonesia, Bangladesh, Nepal, Malaysia, and several in China.

The restaurants are large moneymakers for the North Korean government, and provide hard foreign cash currency that is otherwise difficult to come by. Some say they are fronts for Room 39, a North Korean agency dedicated to acquiring and laundering foreign currency for the government. The staff consists of attractive, highly educated North Korean women who serve traditional dishes and also perform songs and dances from the Motherland in between courses. Photography is generally prohibited.

We had to check this place out.

Our journey started with a quest to find the restaurant, which turned out to be located on the 4th floor of an otherwise nondescript office building, down a dark alley and facing a largely abandoned parking lot. Once we stepped out of the elevator though, an entirely different scene unfolded: a huge, ornate, and almost completely empty restaurant hall decked out with paintings of the North Korean countryside, Christmas lights, and a fish tank. Up front was a portrait of Kim Jong Un, and a small gift counter selling North Korean 'memorabilia' at severely inflated prices. A book of North Korean stamps ran for $120; a novel written by Kim Jong Un sold for $60. We bought the cheapest item available - a small pin from some 2004 sporting event in Pyonyang - for $5. 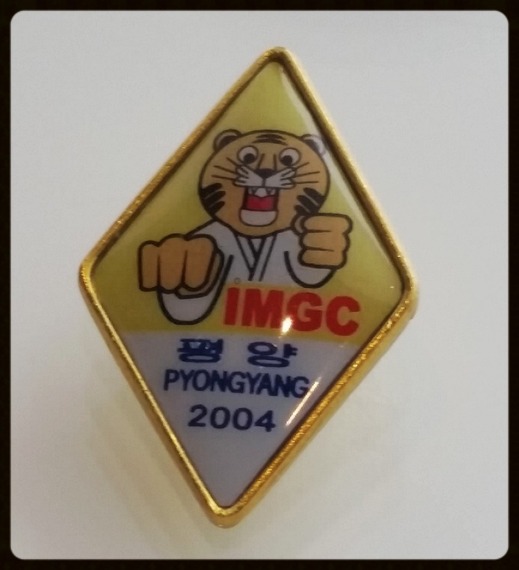 Next to the merchandise booth was a confusing 'gallery' containing North Korean replicas/adaptations/interpretations of famous paintings like the Mona Lisa, also for sale. Past the gallery, in the front of the dining area, was a large stage set up for a full 10 piece band, and decked out with glittering LED and icicle lights.

We were greeted by a beautiful and effusive North Korean (I assume) waitress wearing a neatly pressed contemporary outfit and sky high heels. She handed us an impossibly huge menu, containing over 500 numbered items.

We were on the hunt for authentic North Korean food (though not for the dog soup, which is apparently sold at these establishments; as a side note, we did not see this on the menu). After a good 20 minutes of scanning the menu, we settled on Pyonyang cold buckwheat noodles, a pork and kimchee dish, and a forest mushroom plate.

The food was delicious. We particularly enjoyed the pork and kimchee, which had a nice kick to it, and was also full of juicy, fatty bits that my husband would not touch and so they were all mine. The cold noodles were a little challenging in texture - kind of glassy and slippery - but unique in flavor, with bits of burdock thrown in for crunch.

By the time we finished up, it was past 9 p.m., and we were afraid "the show" would not be held that evening, perhaps on account of there being only 3 parties patronizing the restaurant that night. But our fears were unfounded: suddenly, the lights dimmed, and our waitresses emerged, decked out in traditional North Korean outfits.

The set started with what I assume was a North Korean folk song, following which one of the waitresses stepped forward and belted out an Adele-worthy opera rendition of another unfamiliar tune. Next, a pair of waitresses performed a choreographed song and dance routine during which they impersonated wind-up toys, moving in staccato and freezing in stiff, unnatural positions.

After a few more songs in the same vein, the full troupe of waitresses came up on stage and assumed their seats behind the instruments. At that point the show was briefly interrupted by a large group of confused-looking tourists who had wandered in and were milling around by the gift shop. They were promptly seated by the guitarist waitress, who then just as quickly resumed her place on stage.

And, they were off: a North Korean waitress jam band. OK, they weren't quite Phish, but they were really good, and completely in sync!

With that, the show was over. As we were leaving, a couple of waitresses walked us out. As we approached the elevator, one asked if we were Russian. This made sense - most of the Caucasians in Mongolia are from Russia.

"From America," my husband offered.

A look of surprise flitted across her face (or perhaps I imagined it?) but she quickly recovered her smile.

"We had such a great meal. May we take a picture with you?" I chanced.

"Oh no no, sorry, we are working," they replied in unison.

As we walked back to our hostel, shivering in the late evening Ulaanbaatar chill, my husband and I didn't talk much. We were both preoccupied with the unexpected heaviness of what we had witnessed.

These beautiful, talented women, relegated to performing to an empty restaurant in a city at the end of the world. The beefy "security guards" - several waitresses at Pyonyang Restaurant outposts have recently defected - hovering just offstage. The 500-item menu, nonsensical in economic terms. The gallery of propaganda they shill. And through it all, they never broke character. Even in the open, relatively cosmopolitan city of Ulaanbaatar, the grip held.

"Snap a photo from under the table," I whispered as the waitresses performed their marionette dance, suspending their wrists high above their dangling fingers and turning a painted smile in our direction. "The goons aren't looking."

My husband gave the women a long look, shuffled his feet uncomfortably, and put the phone in his pocket.

Lawyer and land rights expert, with occasional thoughts on other things. Views are my own.