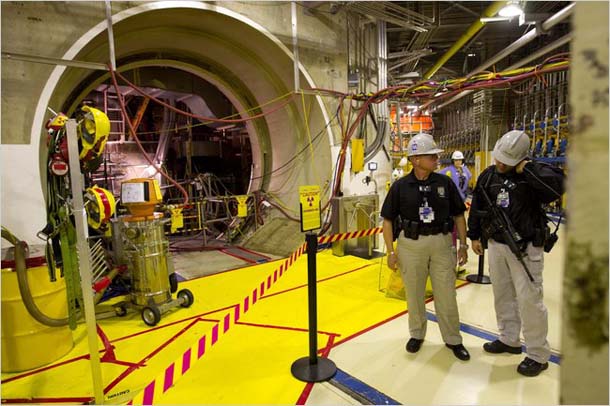 The Browns Ferry nuclear plant near Athens, Alabama, still does not comply with 1980 federal fire regulations that were established in response to a disastrous fire that took place there in 1975. (AP)

The Nuclear Regulatory Commission is playing with fire--literally.

Those standards were established in 1980--and amended in 2004--in response to a disastrous fire that took place at ... Browns Ferry.

That's right. The very plant that prompted the NRC to require plant owners to better protect their facilities from fire--which represents as big a risk for a reactor meltdown as all other potential threats combined--is still not in compliance.

Browns Ferry's owner, the Tennessee Valley Authority, is not the only laggard. Eight years ago, so many reactors were noncompliant with the original regulations--roughly half of the U.S. nuclear fleet--that the NRC revised them to provide plant owners another way to manage fire hazards. If plants for some reason could not meet the 1980 standard, they could voluntarily adhere to the 2004 version.

Owners of 51 reactors have notified the NRC they plan to meet the revised fire standard, but today, 47 still don't comply with either of them.

That's a problem. Since 1995, there have been more than 150 fires at U.S. nuclear plants. The NRC considers many of them to be insignificant, but some of them, like the March 2010 electrical fire at the H.B. Robinson plant in South Carolina, were serious enough that they could disable reactor cooling systems and increase the risk of a core meltdown.

So what has the NRC been doing to address this potentially dangerous situation? Instead of issuing violation notices and forcing plant owners to act, it has routinely granted extensions. And just last year, NRC commissioners voted to postpone the final deadline for compliance with the 2004 regulations to 2016.

Candle in the wind. The fire that prompted the 1980 regulations was accidentally set on March 22, 1975, by a worker using 5,000-year-old technology--a lit candle--to locate air leaks where electrical cables entered the Browns Ferry control room walls. He succeeded in finding a leak, but the rush of air flared the candle, igniting the polyurethane foam seal that insulated the cables at the wall.

The fire, which burned for nearly seven hours, torched some 1,600 electrical cables, disabling the Unit 1 reactor's emergency core cooling systems and most of Unit 2's. (A third reactor was still under construction.) The water level in the Unit 1 reactor containment dropped from 10 feet to about 18 inches over the reactor core. If not for a heroic effort by workers to jury-rig ways to pump water into the reactor containments, both units would have melted down.

At the time, the Browns Ferry fire was the worst accident in U.S. commercial nuclear power history, and it could have been prevented. On March 21, 1974--nearly a year to the day before the fire--the Atomic Energy Commission issued a memo warning that Browns Ferry's cable systems failed to meet regulatory standards. But the agency--which was succeeded by the NRC and the Department of Energy less than a year later--did not require the plant to comply with the fire regulations then in force.

Fire when not ready. Five years after the Browns Ferry fire, the NRC adopted new regulations. Among other things, they required plant owners to separate primary electrical system cables and emergency backup cables by at least 20 feet. If that wasn't possible, plant owners could place them at least 10 feet apart and install fire barriers or fire suppression systems, such as sprinklers and carbon dioxide dischargers. And if the plant's design necessitated placing the two cable systems next to each other, the new rules required owners to wrap them in fire retardant material and install the barriers and suppression systems.

The agency also granted permission on a case-by-case basis for plant owners to include "operator manual actions" in their fire protection plans. In other words, instead of fixing the problem, plant owners were allowed to dispatch workers to manually turn a valve or a pump if a fire knocked out a plant's electric cable systems.

Fast-forward two decades. In the late 1990s, the NRC found that many plant owners had still not adopted the 1980 fire protection measures. Instead of separating or insulating the electrical cables, the agency discovered they were using an "extreme interpretation" of the manual action rules.

"Fires would damage primary and backup cables and workers would have to pass through burning rooms and passageways to manually operate reactor cooling equipment," explained Dave Lochbaum, director of the Union of Concerned Scientists' Nuclear Safety Project, who posted a blog on Browns Ferry's status earlier this week. "In some cases, workers had to perform more than 100 manual tasks during a fire. That's more than plant workers can handle in a reasonable amount of time."

In 2004, the NRC revised its fire protection regulations to provide a way for plant owners to manage fire hazards through computer modeling. The revised rule, developed by the National Fire Protection Association, is called the NFPA 805 standard. This alternate approach allows owners to determine their fire protection plans with risk analysis.

"The NFPA 805 standard seeks the same outcome" as the 1980 regulations, said Lochbaum, who worked at nuclear plants, including Browns Ferry, before joining UCS. "But it allows a plant to do it by calculating fire timing. How long will it take to put out a fire? How long can cables last in a fire? How long would it take for a fire department to get to the site?

In theory, the NFPA 805 standard enables plant owners to figure out how much protection they need in specific plant areas, but these calculations are based on imperfect mathematical models that are still maturing. And by giving plants more flexibility in implementation, the NFPA 805 standard makes it more difficult for the NRC to enforce its fire regulations--which it has been loath to do, anyway.

Money to burn. There are 104 operating nuclear power plants across the country. About half of them--53--are in compliance with the 1980 fire regulations. Owners of the other 51 have committed themselves to adopting the NFPA 805 standard. So far, eight years after NRC issued the standard, only four reactors--the one at Progress Energy's Shearon Harris plant in North Carolina and the three at Duke Energy's Oconee plant in South Carolina--are in compliance with it. Progress Energy, which made a dozen modifications to its plant, spent about $30 million to comply, which suggests that it would have cost the company more than that to meet the 1980 regulations.

Why are the owners of 47 reactors still violating NRC fire regulations?

The most obvious explanation is they don't want to spend the money. Thirty million dollars may seem like a lot, and the price tag to comply will vary from plant to plant depending on the necessary modifications, but the typical nuclear plant clears that much in profits every month and owners can write off the cost as a business expense. Another reason is plant owners have been able to drag out the process for not only years, but decades, thanks to the NRC's routine extensions.

The Tennessee Valley Authority notified the NRC three years ago that Browns Ferry, which didn't meet the 1980 regulations it spawned, would transition to the NFPA 805 standard in March of this year. TVA missed the deadline, and last month the NRC extended it for another year.

In a May 18 statement, the NRC said the extension was justified by TVA's "maintenance of acceptable compensatory measures, the planned improvements, proposed modifications, and continued progress toward the submittal of a high quality amendment request...."

However, as Lochbaum pointed out in his recent blog, TVA is hardly doing an "acceptable" job. On May 28, the NRC issued an inspection report documenting a number of fire protection violations agency inspectors discovered at Browns Ferry between February 6 and March 1. "Thus," Lochbaum wrote, "the NRC granted TVA's request for yet another year to try to achieve compliance with years-old fire protection regulations based largely on compensatory measures and fire protection elements it had just identified as being inadequate."

The NRC's justification for the extension is also puzzling given another serious fire-related safety issue at the plant. Just last year the commission slapped Browns Ferry with a red safety rating--the worst a plant can receive without being shut down--and only the fifth one issued in the past decade. What prompted it? In October 2010, the NRC determined that a Unit 1 reactor coolant pumping system valve had been stuck closed for the previous 18 months. When workers discovered the problem, they used a second "redundant" water line that was dedicated to fire protection, TVA officials told the Chattanooga Times Free Press. If there had been a fire and a reactor shutdown at the same time, it could have led to a serious accident.

In the meantime, TVA spokesman Ray Golden was contrite about Browns Ferry missing its deadline for complying with NRC fire regulations. "It's an important issue to us, and we take the matter very seriously," he told the Decatur Daily. "It's something that can't be done overnight."

Apparently it can't be done in 32 years, either.

Elliott Negin is the director of news & commentary at the Union of Concerned Scientists.