UPDATE: March 9 -- Diver Ryan Carpenter's video above was originally labeled as an interaction with a pyrosome. But after it went viral, marine biologist Rebecca Helm weighed in. A Ph.D. candidate at Brown University who has herself encountered a pyrosome, she thinks this particular sighting was not a pyrosome, but rather the egg case of a diamond-shaped squid.

"My professional opinion? This video is not of a pyrosome. But does this make it less exciting? ABSOLUTELY NOT!" she wrote on Deep Sea News. "If anything, this is more exciting. These egg masses are incredibly rare. ... If I were there I would have been screaming with joy through my regulator."

Carpenter wrote on YouTube that he made his initial conclusion in part based on "the way I saw the thing moving," as pyrosomes are propelled by water moving through their center holes. But in a response to Helm, he admits that "it's certainly possible that water currents (not muscles) accounted for everything I saw."

He's since updated his video to reflect that the mass is probably eggs, rather than a pyrosome: "That seems like the most likely explanation at this point."

What's creepy, fluffy, glow-in-the-dark, and somehow adorable all at the same time?

YouTuber Ryan Carpenter and a group of lucky divers encountered the tubular creature while exploring waters off Ticao Island in the Philippines, as seen in the video above.

It's so rare to spot pyrosomes that marine biologist Rebecca Helm calls them the unicorns of the ocean. While one pyrosome looks like a single worm-like creature, it's actually a colony of hundreds to thousands of individuals called zooids, cloned from one egg and bound together in a cylindrical tunicate.

The translucent tube it forms is hollow, closed on one end and open on the other.

The zooids are bound together in a "gelatinous tunic," which is why the colony looks like a purplish-blue gummy worm. It's also bioluminescent and can emit a blue-green chemical light, which is especially radiant in the dark. 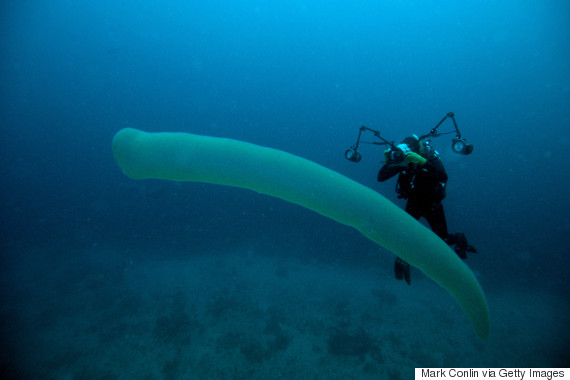 Pyrosomes are filter feeders that use the pores, or individual zooids, on its outer surface to eat microscopic plankton.

Each pore sucks in sea water, filters the unwanted stuff through its pharyngeal basket, and flushes the water out through its center hole, according to the New York Times. These actions also propel the colony through the water.

The pyrosome seen in Carpenter's video was about 4 feet long and 4-5 inches in diameter, according to The Telegraph, but they can grow up to 60 feet long with a diameter wide enough to fit an adult human inside, Helm wrote in Deep Sea News.

They're also "delicate and fluffy," she added. "One diver described a pyrosome saying, 'It felt like an exquisitely soft feather boa.'"

Above, watch Carpenter's encounter with one of the most mysterious glowing creatures of the sea.