Melanie Bishop's young adult novel My So-Called Ruined Life follows female protagonist Tate McCoy during her 17th year, one year after her mother's brutal murder, for which Tate's father is the prime suspect. The novel beautifully captures the resiliency of a teenage girl just trying to make the best of these untenable circumstances. At the same time, the novel highlights the uniqueness of Tate's hometown of Austin, Texas. Kirkus Review calls it "Another tale of a plucky girl who overcomes the obstacles -- but this one floats."

Like Tate, I'm from Austin and I love the way that Melanie Bishop shows all the facets of Austin that make it an amazing place for a teenager to grow up. But more than that, I was enchanted by the beautiful language of the book, and by its humor and pathos.

I had a cyber-exchange with Melanie about the novel. 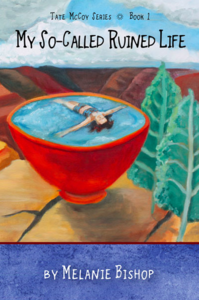 Mary Pauline Lowry (MPL): As MSCRL opens, the murder of Tate's mother is a year in the past, and Tate McCoy's father is on trial. It's clear to Tate (and everyone else) that her father is innocent, but of course the ex-husband (boyfriend, lover) is always the first and most obvious suspect. (Which makes sense given that about 40 percent of murdered women are killed by a current or former intimate partner.) Can you talk about how you decided on this as the driving situation in Tate's life?

Melanie Bishop (MB): I'd never written a young adult novel before and never considered writing about murdered mothers or suspected fathers until a murder like this happened in the small town where I was living. I was slain by the thought of being a daughter amidst these circumstances. Your mother is gone, and people are saying your father is the one who did it. While any murder in our small town was a total aberration, as you point out in your question above, spousal murder is staggeringly common in this world. All you have to do is watch Dateline or 48 Hours to realize that these murders happen all the time. And more often than not, children are involved. So the situation presented itself to me as the premise for a young adult novel. And the first lines came to me immediately and I jotted them down. And then much of the book sort of wrote itself. Once I got it going, Tate just took the lead and it was her voice I was following. I had no desire, nor expertise to write a courtroom drama, nor did I see myself writing a standard murder mystery; my goal was just to write about a strong young woman who was refusing to believe her life was ruined. Despite what everyone was saying about her, she was determined to find her way through this, to stay afloat.

MPL: There's also a thread where Tate is obsessed with Dateline and 48 Hours and all the shows that focus on domestic violence murders. What was Tate getting from those shows, and why do you think those types of shows maintain a strong audience?

MB: Gosh, you know, it's funny, because while I was writing the book, my husband and I watched the shows religiously so I could take notes and incorporate some details from the shows into Tate's fictional life. But once I'd finished writing the book, we found that we were sort of hooked! For Tate, I think she found solace in the shows because they told her she was not alone. Other families had swum in these waters. And because some of the circumstances in the shows are even worse than the ones she's navigating, she's able to feel more fortunate than some of the people featured on Dateline. Why I watch the shows, or why they have a strong audience, I'm not as certain. They are scary and disturbing and baffling. Like Tate, I find myself wondering why people who want out of relationships don't just get a divorce. It's out of my realm of thinking to ponder killing someone who's presenting an obstacle in my life. So there's a fascination with the psychology that leads someone to make these choices. And even though I've seen many of these shows by this time, I still find it hard to believe that people are moved to commit murder. Most of these people aren't your typical psychopaths, killing random people, killing for the sake of killing; they only wish to murder this one person, the same person who they previously loved. It's mind-boggling. And I guess that is part of what keeps people watching.

MPL: In writing the novel were you influenced by the 1990s television show, My So-Called Life, starring Claire Danes? Is the character of Tate McCoy based on anyone in that show, or in your life, or drawn from a protagonist in another novel? Talk a little about how you came up with your protagonist.

MB: That is absolutely where the title came from. I was a huge fan of My So-Called Life. Not only did I find it the most authentic show about being an adolescent girl, I just thought it was amazingly well-written, acted, directed, conceived. There wasn't a lot of good TV, and this show stood out to me as stunning and moving and I was riveted while it lasted. Of course, it quickly got canceled, because this world apparently does not recognize quality! The whole notion of "so-called" to me evokes a certain adolescent viewpoint, where so much is skewed by sarcasm and self-doubt. Even one's own existence might be up for questioning. So-called me. So-called life. That so-called teacher at my so-called school. In the case of this book, this title, the notion of "so-called" is seen not so much as sarcastic, but as redemptive. Everyone believes that a young woman could never possibly recover from the knowledge that her mother was brutally murdered, and that her father is being tried for the crime. Tate's goal in this novel is to prove so-called everyone WRONG. She plans to pick up the pieces and move forward. She is willing to eventually accept that just because this happened to her, doesn't mean it has to define her or stick her under its dark shadow for life. She's uncommon, and she intends to prove this. So the placement of "so-called" suggests that the protagonist in this novel isn't ruined at all, that after a bit of understandable thrashing, she thrives.

The character of Tate is not based on anyone in that show, or anyone in any novel, or anyone at all. She is entirely invented. When I first started writing, as I was finding/hearing Tate's voice, I was imagining several young women I am close to -- some of them former students of mine, some nieces, some the kids of friends of mine. It was never any one person in particular, but a conglomeration of those adolescent female voices that helped me nail down Tate's personality, voice, traits, and outlook. Very quickly, she wasn't being assisted by anyone in my head. She was just herself. Whenever writers talk about this stuff -- how we invent characters -- we sound crazy, like we're hearing voices. We say the characters end up doing things we didn't intend for them to do. It's true; this happens. Characters may start as an invention in the writer's mind, but then they kind of take charge and the writer ends up being more of a medium or conduit or scribe.

MPL: I grew up lifeguarding at Barton Springs Pool in Austin, so I loved that Tate learned to lap swim there, learned to find her "buoyancy." For Tate, swimming becomes a kind of flow activity that she loses herself in. And I know that you are a runner. Do you think it's important for young women (and everyone else) to have this sort of physical activity? And if so, why? What did it mean to Tate to find this? 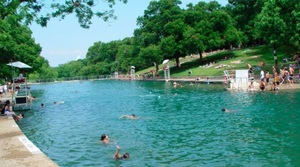 MB: I ran track in high school and did some 10K races in my twenties and thirties, but these days, when I do these events, I'm walking more than I'm running. But yes, I do feel it's important to have a form of physical activity, after which you always feel better. Even if you're tired or beat or hot or sweaty, you feel better because you got out there and did that thing. Hiking or riding your bike. Going to a gym or taking a yoga class. Tate's desire to "find her buoyancy" was initially about her crush on Sawyer Madison, AKA Swimmer Boy. She figured it was a pre-requisite for even being considered as girlfriend material. But once she was actually swimming her first mile at Barton Springs, it was about much more than that. It wasn't about Sawyer anymore, it was about Tate, the belief in herself, that she could find that place where the body floats, just below the surface of the water and swim and swim and swim. It takes her, concurrently, outside of herself and back to herself and it's something no one can ever take away from her.

MPL: As an Austin native, I feel like you did an amazing job capturing the things about Austin that make it unique and an amazing place for teenagers to live. What made you decide on Austin as the location for MSCRL?

MB: Well, I lived in Austin from 1980 to 1984 and I spent a lot of time at Barton Springs and places like Pedernales Falls, and I waitressed all four of those years at Mother's Café, where Tate's friend Kale works. And if I was going to have the story unfold in an actual city rather than a fictional city, I knew I had to pick a place I'd lived, one I knew something about. Right away, I knew it was Austin. It's such a magnificent place to be and even though I never lived there as a teenager, I could imagine it would be such a cool place to grow up. I still have family in Austin and go frequently. Love that town. 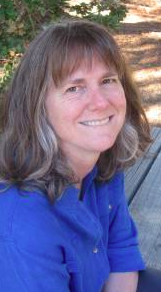 MPL: That's funny, because Mother's Café has always been one of my favorite restaurants. Okay, so this novel is the first in the Tate McCoy series. Can you talk a bit about the next novel and the challenges that Tate will face?

MB: Well, funny you should ask that, because just last night I returned from an eight-day writing retreat at Boulders Writing Retreat where I was working hard on the second book in the series, which still has no title, but is now about 145 pages. I don't want to give anything away, but I will say that in the first book, all of the trouble that rains down on Tate McCoy is not her fault, not her doing. These are things that happen to her, by no fault of her own. In Book Two, she makes some bad choices and has some regrets and has to find her way out of those more self-inflicted predicaments. She has to test her "buoyancy" in other waters. Oh, here's one teaser for you, since you brought up the show with Claire Danes: in Book Two of the Tate McCoy Series, Tate stops watching Dateline and 48 Hours and starts watching, you guessed it, My So-Called Life. Obsessively.