Ask me to describe film director and writer Quentin Tarantino in a single word and I'll pass. It's an impossible task. His films crashed their way into our cinematic psyche like a bloody bowling ball through pins of cookie-cutter movie formulas. The material he puts forth overflows with grit, beauty, humor, tragedy and countless other layers. Strike!
I would also pass if you asked me the same of visual artist Shaine Schroeder, who is currently gearing to unveil a Tarantino-inspired collection, appropriately and simply titled Q. Whether deliberately or coincidentally, the timing couldn't be better, as Mr. Tarantino has been a bit of a hot news item recently due to his outspoken views against police brutality. His words have not landed him in the midst of only controversy but boycott threats as well. As unshakeable as a character of his own creation, Q continues to ally himself with the #BlackLivesMatter movement. Life imitates art.

John Gascot: What prompted you to create a Tarantino series?

Shaine Schroeder: I feel like his style of storytelling and my style of artwork are simpatico. Each of his films are wildly different, yet you know almost immediately who the mind behind them was. Such is the case with the pieces I produce. Even if one were made with crayon and another with high test oil, you'd know right away they'd both sprung from the same incubator.
Tarantino made movies fun again. In an age when most seem to follow a tried and true formula for box office success, you can't help but hold the ones with balls in high regard. People who fall in line are never remembered. Those who are willing to put everything they have on the table are. 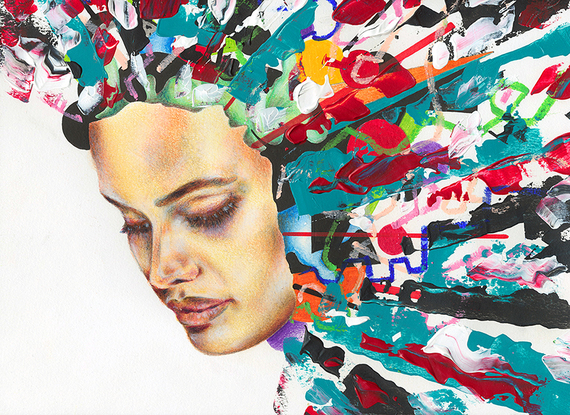 Spend it on Sunrays, colored pencil and acrylic on paper, 9" x 12"

SS: I fancy a nice, meaty revenge story. And who better to get revenge than a group of human beings who were wronged on such a massive scale simply because of their beliefs? The opening scene with Christoph Waltz paying an unexpected visit to a farm house was the most intense scene I'd witnessed in cinema in a very long time. That film is serious, funny, weird, tense, uncomfortable, bloody, and very stylized. It's a comic book with a pulse. It's beautiful to watch and I never tire of it. That's what I dig about Tarantino. He's not a flash in the pan. I watch Reservoir Dogs and to this day still get goose bumps. I sit around with friends and quote the entire film.

JG: Your body of work includes a wide variety of mediums. Some of the Q pieces combine colored pencil with acrylic in unexpected ways. Why these two mediums and this technique in particular?

SS: These are some new techniques I've been playing with and I credit that to re-watching every film in the Tarantino library. He takes some of the darkest material imaginable and paints it with a very colorful brush, but that's why it has such an impact. A bright red ball gag, a pitch black gimp outfit, the yellows of the low wattage bulbs in the basement room. Ever since I saw that unforgettable scene in Pulp Fiction I've steered clear of pawn shops. When you behold a great work of art, whether film, song, literature or otherwise, it has a tendency to sink its teeth into your psyche and light a fire under your ass to do better. To hone and perfect your craft. That's what I did with these mediums that I had never before combined. I pushed myself into something uncomfortable and was pleasantly surprised with the results. Not all pieces in this series are directly linked to a Tarantino film. In some cases, I simply used a color palette from a scene, or word association. For instance, the piece "White Rabbit" is inspired by the character "Honey Bunny." Other than the word itself, the painting and the character have nothing to do with one another. 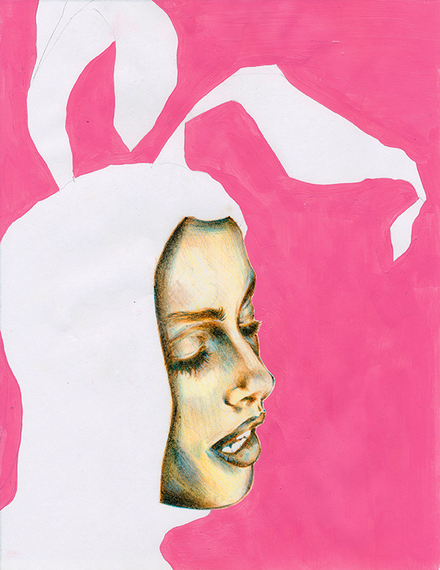 JG: Do you foresee any other film/director inspired series in your future?

SS: I'd love to work on something inspired by Paul Thomas Anderson or Darren Aronofsky. Those two individuals can do no wrong as far as I'm concerned.

JG: Can you tell us a bit about your process?

SS: Well, I'm always fully clothed and there aren't candles burning, I don't care what you may have heard. My process is immediate. I can't fuss about with preliminary sketches because it's boring to me to create the same thing twice. It isn't pure and it isn't fun. It's hell. I've tried, but I simply don't have the patience. Once it's on the canvas it's done, there can't be a second version. But what I do involves countless layers. People will see something I do an hour in and say it looks like shit. It does, but that's chapter one of fifty. Don't put the book down just yet. I always listen to music, usually rough, dirty east coast hip hop. Lately I've been mildly obsessed with podcasts, in particular Michael Rapaport's I Am Rapaport. That shit has me laughing my ass off every ten minutes. 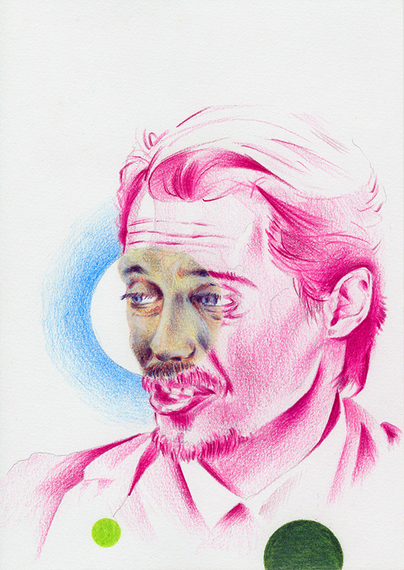 JG: Your bio says you learned about the business side of art during college. How have you applied that knowledge to your art career and do you have any advice for artists who might find themselves struggling to stay afloat as art makers?

SS: You have to enjoy running a store. You are your own store, and you are your own brand. I know a ton of people who are great artists but terrible marketers. They get uncomfortable selling themselves. I understand, it's weird to do. It's almost as if you're talking about yourself in the third person, and nobody likes that shit. But once you get over that hump, everything flows. You may not make a killing financially, but people can tell you're more secure with your craft. Confidence is key. If you don't like what you produce, keep practicing until you do. Once it's polished, show it to the world and shout that shit from a mountain top, because no one else is going to do it for you.

JG: Did you always know you'd be an artist?

SS: Yes. I was never good at anything else. I've had so many nine to five jobs it's embarrassing. It really is an obsession for me. I live for it. And I'm always soaking everything in like a sponge. If I like the texture of a wall, I file it away and use it as the background for a painting. If a woman's lips curve in a way I've never seen I incorporate that curve into my next character. If I stare in your direction too long it's not to be creepy, I'm just analyzing, scouting for material.

JG: What is the first thing you can remember drawing?

SS: An escape route map from my house to my grandparent's when I was young. They're amazing people and my parents were in the middle of a hateful divorce.

JG: What is the last thing you drew or painted?

SS: A royale with cheese. 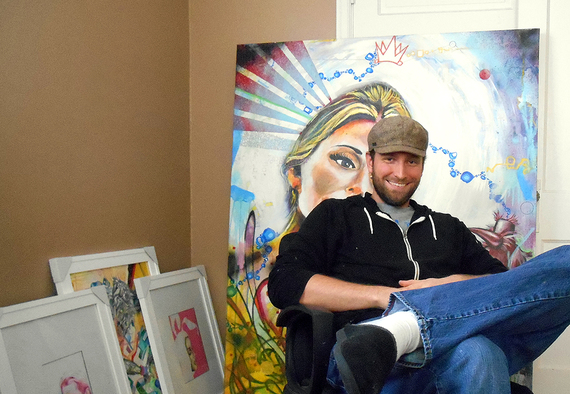 Mr. Schroeder and his work.

SS: Good lord. Of course you'd put a man in a committed relationship in an awkward position like this. Can't we play "Wave, Handshake, Hug" instead? Alright, if I have to, hypothetically...

Should you find yourself in Sioux Falls, South Dakota on Tuesday, December 8th, 6-9pm be sure to catch Q at Bro's Brasserie Americano. The showing will be a one-night-only event. For details and updates on Q visit its event page.