The final Q1 2014 GDP growth estimate of minus (-2.9) percent, down from the second (-1) percent drop, was a shock for several reasons. Firstly, it means our domestic economy is still sputtering, five years after the end of the Great Recession. Secondly, it means it will take more than Janet Yellen's accommodative Fed to boost economic growth to a sustainable level.

Average economic growth over the past 4 quarters has dipped to just 2 percent, mainly because Q1 personal consumption dipped to 1 percent from its initial 3.1 percent estimate. And inventories weren't replenished, maybe due to the horrid winter. But government outlays also shrank, not due to the weather, contributing to the growth shrinkage. 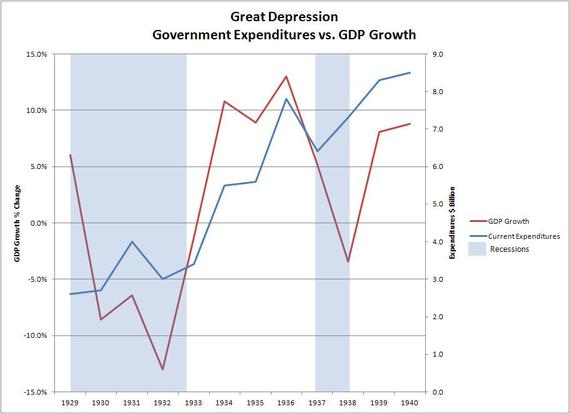 What should be done? More government investment in public works, for starters. It was New Deal government-funded programs that brought US out of the Great Depression by 1933. It only retrenched back into the Depression when Congress and FDR decided to balance the budget in 1937 by cutting back prematurely on government spending.

Growth came back quickly by 1939 with just a small increase in New Deal spending. Though it took WWII to complete the recovery when government had to spend what was necessary to win the war. The budget deficit wasn't an issue--though it rose as high as 120 percent of GDP--because government debt was paid down quickly after WWII from rising consumer incomes and spending.

The evidence that public works programs boost growth is plain for all to see. Even the 2009 American Reinvestment and Recovery Act (ARRA) stimulus created or saved up to 3 million jobs, according to the Congressional Budget Office.

The lack of public spending today is due to budget austerity--cutting government spending prematurely when the private sector isn't yet prepared to spend--something that is afflicting European countries as well as US. It is preventing faster growth everywhere that such budget cutting policies have been enacted.

In fact, Europe plunged back into a second recession because its northern contingent led by Germany insisted on cutting the budgets of Greece, Spain, and Ireland. This reduced their revenues and increased their deficits, plunging them back into recession. So the only way they could compete in the euro zone was to lower workers' incomes, further compounding the pain.

Austerity has happened in the US with a conflicted president and Congress that won't utilize the $billions sitting in banks and on corporate balance sheets by either increasing their taxes, or borrowing more at record low-interest rates. It is those who oppose higher taxation and government spending that is bringing US closer to 1937. Hence the debt ceiling debacle that downgraded US federal debt. 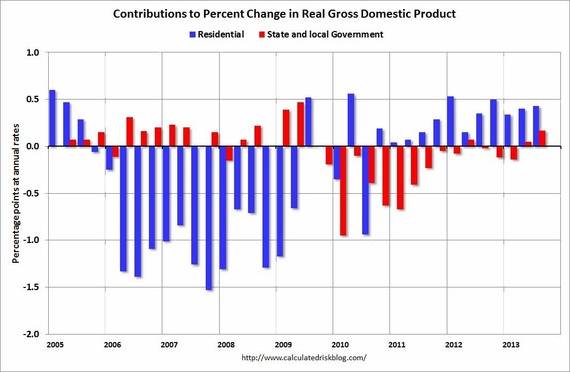 And right now, it is specifically the lack of government spending (red bar on graph) on necessary public works that is holding by GDP growth. In other words, we are in the grip of those same Austerians that insist the cure is more pain for the heavily indebted, instead of creating more jobs that would pay down that debt by restoring growth and full employment.

The Fed has put more cash in the hands of investors to encourage them to invest in more productive capacity, which is finally boosting residential investment (blue bar on graph). But the looming end of QE3 will end that support of lower Treasury and mortgage rates. So it is time for Congress and the Obama administration to act, if we want to prevent a return to depression-era growth, as happened in 1937.