The following interview first appeared in The National Book Review: 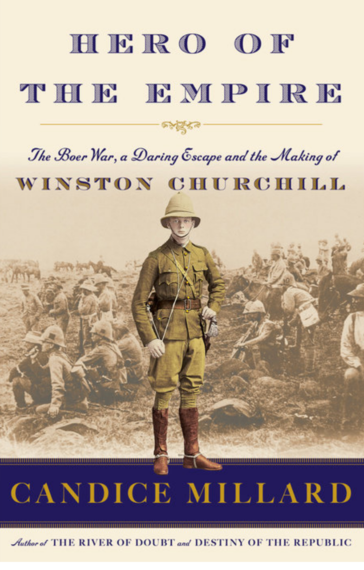 In The River of Doubt, historian Candice Millard followed Theodore Roosevelt on a harrowing adventure along the Amazon River. In Destiny of the Republic, she explored the assassination of James Garfield. In her latest book, Hero of the Empire: The Boer War, A Daring Escape, and the Making of Winston Churchill, Millard delves into another illuminating moment in the life of a major historical figure -- telling the story of a youthful Churchill's adventures in Africa during the Boer War. Millard answered questions about the book, and writing history, from The National's Jim Swearingen.

Q: Candice Millard, thank you for taking the time to talk with The National. You have managed to find some compelling periods of your subjects' lives that don't get a lot of attention. Is there a method you follow to select a subject?

A: Mostly I'm just looking for a great story, but I do have a few criteria. It has to be a strong enough story that it can carry along with it fairly weighty subjects, from natural history to the evolution of warfare. It has to have great characters and tangential storylines that support the central narrative but are fascinating in their own right. Most of all, I have to have access to an enormous quantity of primary source material. Without letters, diaries, newspaper articles, I can't have dialogue or any of the little details that, I hope, will make a story come alive.

Q: In your latest book, Hero of the Empire, Churchill seems always to be learning even at those moments when he is most miserable, or in danger. Was his experience in the Boer War pivotal to creating the Churchill that most of us think of as the backbone of British resistance to Hitler?

A: Absolutely. Churchill always believed in himself--had "faith in [his] star," as he put it--but in South Africa he put that confidence to the test, proving to himself that he was not only brave, determined and resourceful but a natural leader. When the armored train he was riding in was attacked by the Boers, he seized command of its defense, even though he was just a 24-year-old correspondent, one of the few civilians on the train. When he escaped from a POW camp in Pretoria, making his way across nearly 300 miles of enemy territory, he did it alone, without a map, a compass, food or a weapon. He was incredibly creative and agile, and he just refused to give up.

Q: Some biographers love their subjects, some hate them, and some fall in between. It's also not uncommon for biographers to change their views in the process of writing a book. How did you start out feeling about Churchill -- and how did you end up?

A: Like many people around the world, I have long been fascinated by Churchill. He was not a perfect man by any stretch of the imagination. There's no question that he was an imperialist, and I think that, because he was raised during the Victorian age, in the highest ranks of the British aristocracy, he was also an elitist. That said, I think it would be difficult to argue that he wasn't an incredibly effective and stirring force during World War II or that he didn't have a tremendous impact on the world in which we now live. I'm deeply impressed by his brilliance, his wit and his determination, and I admire the fact that, although no one fought harder than Churchill during war, few were as magnanimous after victory had been declared.

Q: The "great men" approach to studying history seems out of vogue these days. Why do you prefer focusing on them rather than say, historical economics, or migrations, or political trends?

A: What interests me most is people. In particular, I'm fascinated by how someone overcomes obstacles. Usually when we look back in time, we focus on large, public moments of triumph or infamy, but what I'm interested in are those moments of personal struggle, when someone has lost his footing, is sick or scared, grieving or desperate. James Garfield said that it was in those moments that true nature is revealed, what he called the "bed of the sea," and I think he was right.

Q: Turning to the subject of women historians, do you think they--or you specifically--bring a different perspective to the study of famous men than male historians do? I'm recalling your moving description of James Garfield's railroad car being physically pushed up the hill to his home by hundreds of caring citizens when he was going home to die. Do these historical figures and events play differently in the hands of a woman historian?

A: I don't know if it's because I'm a woman or just because that's the way my mind works. I want to know more than the broad outlines of a story. I want to dig in as deeply as I can, immerse myself in the subject. The only way to do that is to do a lot of primary research--both archival and physical, working in libraries and going to where the events unfolded--and then to spend just as much time understanding the story, the characters, the event, and trying to make sense of them through a very detailed outline. I don't write a single word until I think I truly understand the story, and that can't be done without years of research.

Q: You have made a wonderful career of writing about some remarkable men: Teddy Roosevelt, James Garfield, now Churchill, and you have stated that you will write about an extraordinary woman next. (I recall at least one of your fans urging you to write about Florence Nightingale). Can we cajole you into revealing who your next book might be about?

A: I would tell you if I knew myself. I have a few contenders, and one, possibly my favorite, is a woman, but I still have a lot of work to do before I can commit to any one of them. I think they're all great stories, but I have a lot of great story ideas that will never become books, in most cases because there's just not enough primary source material to work with. The good news is that I love this part of the process, so I'm really looking forward to a winter full of books and archival research. What could be better?