Bao Nguyen, a Vietnamese refugee brought to the United States by his parents as a child, was elected Mayor of Garden Grove, CA in 2014. Upon his swearing-in, he became the first directly-elected Vietnamese-American Mayor from the Democratic Party in the United States. He is also the traditionally conservative city's first Vietnamese-American and first openly LGBTQ mayor. Prior to his election, Nguyen served as a member of the Garden Grove Unified School District Board of Education. He is currently running for U.S. Congress to represent California's 46th District. I spoke with him recently when he visited San Francisco.

You're the first openly gay Vietnamese-American mayor of Garden Grove. How has the community in Little Saigon reacted?

A lot of Vietnamese Americans viewed my coming out as a very bold move. But Garden Grove is a city of compassion. And I'm proud to represent Little Saigon, because we are an incredibly diverse community.

How do you think voters in the traditionally conservative district will resond to your bid for Congress?

Even though some [voters in the district] continue to hold onto conservative ideas, they have embraced the fact that I am truthful to myself.

You mention compassion. How has or will your Buddhist faith inform your work in the political realm? 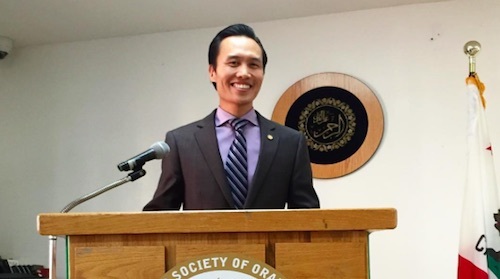 Compassion is a central tenant of Buddhism. In fact, when the Dalai Lama came to Garden Grove [in April] and I gave him the key to the city, we proclaimed Garden Grove a city of compassion. But compassion is really just an understanding that we're all interconnected. Compassion informs the basis of a lot of my key policies, including passing comprehensive immigration reform, building a better education system, and fighting for LGBT equality.

You've tackled corruption, government transparency and education as mayor. What are you hoping to accomplish in Congress?

I want to pass the most progressive policy agenda we've seen in 40 years. That means bringing federal funding for grants and infrastructure, so people who are looking for work in Orange County can find it. That means passing not just comprehensive immigration reform, but a compassionate immigration policy that keeps families together. That means providing high quality healthcare to every last American, because healthcare is a human right. That means making education much more affordable, because the state should not be profiting off of student debt.

As a college student you organized a protest against Senator John McCain for his use of the word "gook." Your position put you against conservative Vietnamese Americans. Has your thinking since evolved on that?

Hate rhetoric and speech has no place in this country, or in American political discourse. I'll always call out injustice and racially biased rhetoric where I see it.

Did you think then that you would pursue a career in politics?

I never thought I'd be mayor or run for Congress. But I've always felt passionate about justice. The reason I got involved in politics in the first place is because in high school, Congresswoman Loretta Sanchez was defending her newly won seat against Bob Dornan, the incumbent she had just defeated. He was lobbing false, racially biased claims that "illegal aliens" had somehow cast votes for her. She fought back, and that's what inspired me to get involved. Now I'm running to replace her open seat on Congress. 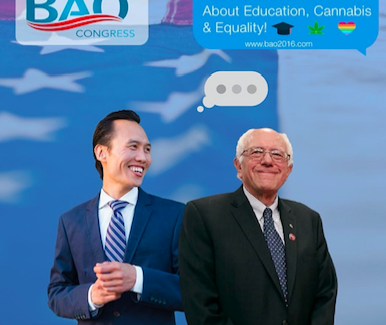 What do you make of the American presidential election? Who do you support?

I proudly support Bernie Sanders. He's the only candidate in this race with the political courage to take on the special interests that overrun Washington.

As a Vietnamese American, what do you anticipate from President Obama's upcoming visit to Vietnam amid continued allegations there of human rights abuses, environmental calamities and Chinese aggression?

The human rights situation in Vietnam is atrocious. Just the other week, I met with Vu Minh Khanh, wife of imprisoned political dissident and human rights attorney Nguyen Van Dai. She came to America to shine a spotlight on the human rights abuses in Vietnam, where they are imprisoning citizens like her husband in solitary confinement without charge. I recently wrote a letter to President Obama and Secretary of State John Kerry urging the release of Mr. Nguyen.

On top of the blatant human rights violations, large corporations are dumping toxic waste into the ocean, which as you've seen from the photos is killing millions of fish. And government officials in Vietnam continue to pass the buck. This lack of accountability is destroying the livelihood of the Vietnamese people

At the same time, it's important to buffer China's military encroachment in Southeast Asia. And while we have an arms surplus to deal with, I don't think dumping those arms on developing nations is the most effective way to counter China. That's because there's no way to know that the government won't use those weapons against its own people.

We have to be very careful and very smart about how we approach our relationship with Vietnam. That's why we need an intelligence-focused approach to this situation, so we can find the right partners on the ground, know who our friends are, know who's working against us, and begin to build democracy in the region.

New America Media editor, Andrew Lam, is the author of two books of essays, "Perfume Dreams: Reflections on the Vietnamese Diaspora," "East Eats West: Writing in Two Hemispheres," and "Birds of Paradise Lost," a collection of short stories on boat people who struggle to remake their lives in the Bay Area.