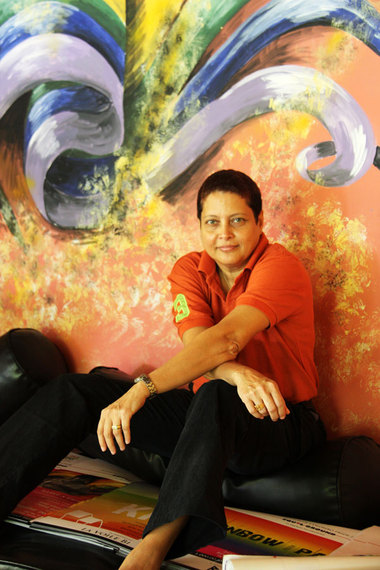 LGBT people have faced extreme discrimination in Sri Lanka. For more than a century, the country has outlawed same-sex relationships under its colonial-era "gross indecency" laws. And in 2001, a Sri Lankan newspaper publicly called on convicted rapists to continue their violence--but only against the country's lesbians, in an effort to "cure" them.

Activists like Rosanna Flamer-Caldera are pushing back against this kind of ignorance and hate. In 2004, she founded her nonprofit organization, EQUAL GROUND, to advocate for human rights and equality for LGBT Sri Lankans. Flamer-Caldera has also served as the co-secretary general of the International Lesbian and Gay Association.

Could you tell us about how you first got involved in the LGBT rights movement?

I moved to San Francisco [from Sri Lanka], and it was a time that moved me a lot and really formulated my life. In 1978, I attended my first gay pride parade. I had just come out, and Harvey Milk was heading the parade. A few months later, he was assassinated. Then came the whole AIDS epidemic.

When I came back to Sri Lanka, I actually used a lot of the things that I learned in San Francisco: candlelight vigils and demonstrations and gay pride celebrations. Sri Lanka had never seen any actual LGBT organizations fighting for the rights of LGBT people. A lot of LGBT people said, "Why are you rocking the boat? We're happy to just be hiding in the closet."

What's it like to be LGBT in Sri Lanka? How does that shape EQUAL GROUND's work?

The situation is very tense for LGBT people in Sri Lanka at the moment. We have started getting all kinds of harassment. For example: The police do presentations to various audiences, and they talk about escalating child abuse--and they say that it's all because of homosexuality, because all homosexuals are pedophiles. And then they put my picture up on the screen and say, "This woman leads a homosexual organization, EQUAL GROUND, and she's in charge of spreading homosexuality and pedophilia in Sri Lanka."

There's always a scapegoat to hide the real problems that go on here. For instance, the escalating cost of living -- there's no more middle class. The middle class is just sliding into poverty because the rich get richer. People bring out the old "homosexual menace" to distract everyone from real social problems.

Has EQUAL GROUND made an impact in Sri Lanka over the years? Do you see signs of progress?

I think we've come a long way. This year, we had pride celebrations that included people from all over Sri Lanka. Pride celebrations here are done differently from pride celebrations elsewhere, like in the U.S. We don't march on the streets. There is no parade. We were really nervous while doing a pride celebration this year, but it was done really well. And pride has been one of the things that have enabled EQUAL GROUND to really mainstream LGBT issues and make people understand. I'm very proud of that. For the first time this year, we had several corporate sponsors--that in itself is a big stride forward for us because normally, business sponsors, they don't want to get involved with queer issues in this country.

And, for the first time, we took pride to the rural areas. It's amazing; one would think that these people would probably come at us with machetes or something, but they're very understanding once you put the cards on the table and say, "This is about human rights. This is about everybody's right to be who they are and not be afraid of saying they're gay or lesbian, not be afraid of following what's in their heart." The people in the rural areas, they know what it's like to have their human rights violated. When you're poor in Sri Lanka, you just don't have any rights, no matter who you are.

Learn more about AJWS's efforts to defend LGBT rights around the world and EQUAL GROUND's work in Sri Lanka.