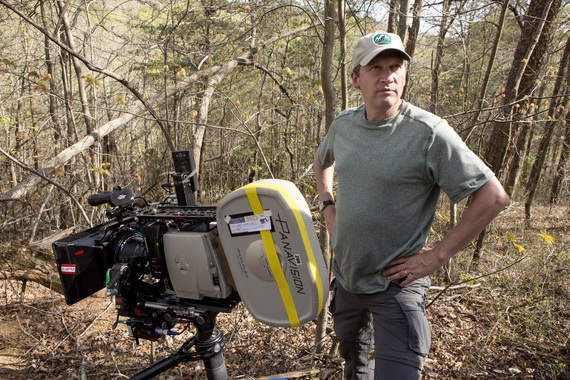 This week the film A Walk in the Woods, based on Bill Bryson's 1998 best-selling book, comes out in theaters. Sierra Club radio host Orli Cotel spoke with director Ken Kwapis about working (and walking) in the woods with Hollywood icons Robert Redford and Nick Nolte, and how the film changed his relationship to the outdoors. The following excerpt is adapted from their interview.

What drew you to this story?

When I first read the book, I loved it. Bryson and his old friend Steven Katz are the main characters, but the third character is the Appalachian Trail itself. I had just directed Big Miracle, which pitted characters against an extreme environment--northern Alaska in the dead of winter--and I was excited about telling another story in which the natural world plays an important role. Also, like Bryson, I have felt the urge to go into the woods, literally and figuratively--unplug the computer, put away the cellphone, and have an unmediated nature experience. And, the book is really funny. There are laugh-out-loud, slap-your-knee moments in it.

What are some of the challenges of directing a film that's based on a book already so well-known and loved?

One of our goals was to communicate what it's really like to walk a long distance, to be in a boundless woodland, or to suddenly emerge at a jaw-dropping vista. It's not a matter of simply capturing beauty; it's also about what that experience is like, the intense solitude you feel walking alone for days. Our job was to bring the book to life, but I do feel an obligation to the book's many fans and the people who have hiked the trail. I want them to come away saying, "Yeah, they got it."

Did Redford and Nolte have experience backpacking?

Bob has always been in great shape, but I don't know that he's a hiker. Both actors definitely wanted to do the trail justice. It's not a stroll in the woods. There are important emotional scenes between the two characters as they are hiking, often uphill. Any scene requires multiple takes, so imagine doing that over and over again hiking up steep terrain. By the end of the picture, both guys were pretty fit.

How did the film change your relationship with the environment, or with the Appalachian Trail? Was that an area you knew before?

No. I live in the Hollywood Hills of Los Angeles. The terrain is quite different from north Georgia, North Carolina, Tennessee, and Virginia. But I will say that working on the film has made me want to take a walk in my own backyard and actually see what's there. I don't know if I could name the trees out there. So I think that my relationship to the natural world has changed profoundly because of the film, and it opened up my eyes in a new way.

There's a lot of background and scientific facts about the Appalachian Trail in the book that don't necessarily lend themselves to drama.

Not only does the book have a lot of scientific and historical information, but it really has very little plot. It's about two guys going from point A to point B. The big plot question is will they get to point B? There's the map of the Appalachian Trail, and then right beside it is the emotional trail these two characters travel.

Audience members get to dive into the relationship between these two characters just like they would if they were really on the trail with them.

These two guys have a lot of emotional baggage. When they last saw each other, they were not on good terms, and the trail forces them to face themselves and each other. It also forces them to take stock of their lives. One of the things that drew me to the screenplay is its essential optimism, because at the end of the day, it's about realizing that there's always another adventure around the corner.

What was it like to direct film legends Robert Redford and Nick Nolte?

Both Bob and Nick have spent decades performing their craft on the big screen. Each of them has an amazing ability to tell a whole story with the smallest gesture, without a lot of words--one raised eyebrow, a grimace, a sigh. They are really great at letting the lens capture a character's interior life.

How else did this film change you?

In Hollywood these days, it's difficult to mount a production that is so simple and intimate. There are fewer and fewer films like this, and I'll be honest, sometimes I get a little cynical about the business. But the fact that we were able to put this picture together and that audiences have embraced it makes me optimistic for the future. There's still room out there in the movie universe for films that are well-observed, character-driven stories.

What types of environmental and social issues do you care about personally?

My interest in environmentalism goes back to when I was a Boy Scout growing up in southern Illinois. In some small way, getting to make a film like this is my contribution--if nothing else, just by reminding people of what's in their backyard.

Is there anything else you want to tell us about the film?

When we were doing the sound design, our sound editor wanted to make sure that we were very authentic in terms of what birds the audience hears at what point along the trail. Basically there's this little ornithological musical trail in the film. I know that a lot of Sierra Club members are birders, and my hope is that when they see the film, they might catch a whistle or a bit of birdsong and say, "That bird belongs in North Carolina."

Listen to the complete interview at Sierra magazine.