Christine Coppa was 26 and living the fabulous life in New York City when--wham!--she got pregnant. In quick succession, her boyfriend of almost three months (and the baby's father) hit the road, she had a baby boy named J.D. (Jack Domenic), and got a contract to blog about the whole thing for Glamour magazine. Now, just two years later, she's publishing a more extensive memoir about becoming a surprise single mom, called Rattled. 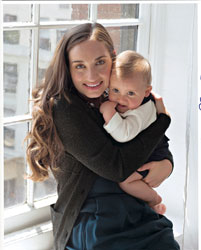 HuffPo: What's it like blogging about such a personal thing--maybe one of the most personal things--having a baby unexpectedly and out of wedlock?

Christine Coppa: It's funny, I never even thought of it like that. I thought of it like a job, a second income when I really needed one. What's more, I'm a writer. Writers do write about their lives. I'm a little over people saying I'm exploiting my life for money. Am I the only writer who ever wrote a memoir or a personal essay? I'm not a mom who decided to start blogging about motherhood for fun. I'm a writer who got pregnant.

Ok, fair enough. But you must have thick skin, because I'm sure there has to be some criticism involved.

Gawker.com wrote about Storked!, and gave it a good review, but one commenter said I was "walking around with the biggest mistake in my belly" and she knew what it was like because like me, she got pregnant early on in a relationship, but aborted. Maybe she was looking for some other commenters to make her feel okay about her decision--she was just someone struggling with her own mistake. I'll always remember that comment. My editor told me not to read the nasty comments, but sometimes it's like a train wreck--you can't look away.

The great thing about your blog is that you readily admit your own mistakes.

My ex and I had sex, fully aware I was not on the pill and he was not wearing a condom and I take full responsibility for that and tell people religiously on my blog I was stupid for having sex sans protection. And by the way, having a baby isn't the only responsible version of my story. Choosing to have an abortion or adoption because you can't support the child or don't want to be a mother is also quite responsible. 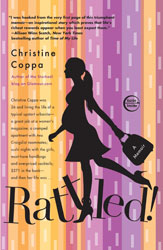 How did the blog evolve into a memoir?

I got a Myspace message from an editor at a publishing house who asked if I was considering a book. I was, but I was also on maternity leave with a brand-new baby. It seemed like a huge undertaking, but it also seemed like an incredible opportunity. My editor at Glamour hooked me up with an agent. Rattled! was born--so to speak!--and sold to a different editor. I wrote most of it at night because I was back working full-time at First magazine [Christine returned to work when her 20-week maternity leave--8 weeks paid and 12 weeks unpaid--was up].

And I thought I was busy!

[Laughs]. I have fond memories of JD sleeping in the swing next to my desk while I wrote and how when I looked over at him, his hands were tucked up under his chin. It was a very special year for me. I did a lot of proofreading and editing with JD sleeping in my lap. He smelled like formula and sometimes I had to pinch myself because the moment was so perfect...but it wasn't always easy. The book made me remember things, go places, relive them...I let a lot out through Rattled! It was shockingly therapeutic and what I consider a love story I never thought I would write. And by that I mean, I always imagined the full package. The husband, the house, then the baby. Things just happened out of order. This is how JD and I were supposed to meet.

It's interesting that you are writing stuff of a highly personally nature, yet a lot of times you don't "go there." Where do you decide to draw the line between public and private information?

I do go there, I think. I just think that there's nothing sensational about the reality. My son's father left when I was 11 weeks pregnant because he wasn't ready for fatherhood. In the beginning he was excited, then he wasn't, then he left. I struggle with our breakup and I try to pinpoint when we went away and it makes me feel very uneasy. Sometimes I wonder what it would like if we were still together.

Were you surprised by your ex's decision to not be involved at all?

At first I was angry and put on my super hero cape. A few days later, the dust settled and I thought maybe he settled a bit too. I invited him to dinner to talk things over. He didn't want to have dinner...and that was it. I was on my own and from there on out, everything changed. I think I shed my skin right then. A whole new person was born. There is Christine before JD and there is Christine after.

I think it's irresponsible for "mommy bloggers" to talk smack about the child's absent father. I saw a blog once titled, "Mother's Worst Nightmare: My ex wants to see his kid." A.) The kid should not have to read that and associate "nightmare" with HIS FATHER, and B.) Why is it a nightmare? And for whom? My door is open to my son's father and he knows that. I've always been very careful about what I say and how much. Glamour didn't contract me to write about my ex. They hired me to write about single motherhood, and sure, I could write about him, but why? Talk smack to your girlfriends with a glass of wine behind closed doors. Plus, I know JD is going to read the blog and the book one day. If he wants to know things about his father, I'd rather tell him myself.

I think that if a baby is born then the people who made that baby should take care of him unless a mutual decision is made that absolves one parent from the picture. There is no mutual decision in my case. In the state of New Jersey, where I live, one cannot abolish their parental rights "just because." The only way for my ex to be completely, legally relieved of his rights is if I get married and JD is adopted by my husband. And nothing abolishes the bloodline or the reality. I think a lot of men, in, say, my ex's situation, make immediate decisions because they're scared. By the way, I was so scared too!

Fathers choose to "abort" their kids all the time, even if they pay child support. A check doesn't make you a father. A father is around or there is some sort of open communication. And on that same note, women abandon their kids, too. I have two single dad friends that have full custody because mom didn't want to be a mom after she gave birth.

I think when you put all this messy stuff aside, the most important thing is that the child is taken care of. It does take a village. My brothers are religiously mistaken as JD's dad in public and that says something wonderful about them. I don't have any sisters, but my girlfriends call themselves aunts. A mom came up to me at story time at the library a few weeks ago. She asked if my son played at the park by the lake and I said yes. She said, "I thought I recognized you--your son is such a happy baby. Always smiling and hugging everyone." I actually teared up. My son is happy, healthy and thriving--and I'm a single mom.

Here's the tough question. Did you ever consider not having the JD--either having an abortion or giving him up for adoption?

I got pregnant 2.5 months into a relationship. I freaked out and thought about a lot of things, but that's where it ended. My decision to keep my baby was immediate. His heartbeat was all I needed to see. I always wanted to be a mother. I didn't want to get pregnant at 26 and do it alone but it happened. In Rattled! I say, "The pregnancy was unwanted. But the child is not." The sentence probably doesn't make sense to everyone, but it makes sense to me.