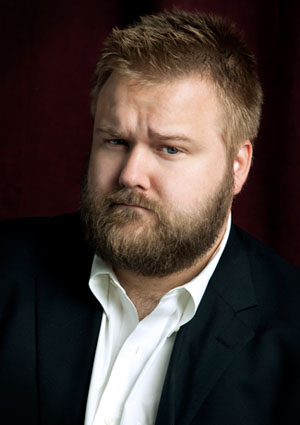 At 33, Robert Kirkman has accomplished more than most people do in a career. He's the executive producer and writer of The Walking Dead, the pop-culture phenomenon that also happens to be based on the award-winning comic series he created and continues to write (the 100th issue was just released in July.) If that weren't enough, he continues to create and write other comics at Skybound, his own imprint at Image Comics, where he has been a major force in revolutionizing the business model of the comic book publishing industry with his infamous "Kirkman Manifesto." Last year he released his first novel, which debuted at #18 on The New York Times bestseller list. Simply put: The guy does a lot. We spoke with the entertainment industry's beloved Renaissance man to talk about killing off the show's characters, how he would handle an apocalypse, and what it's like to sit at a writer's table where people are constantly trying to make his work better (spoiler alert: "It's awkward.")

GQ: Why do you think the show's become so popular?

Robert Kirkman: The fall of civilization is a fun fantasy to explore. And I also think it's in the zeitgeist; it's definitely something they talk about on Fox News a lot, and it's the end of the world every week on the History Channel, so it's on people's minds. And being able to explore and experience it in a very safe and detatched way is something that's pretty appealing. Also, we've got zombies eating people -- and that's always cool.

GQ: After Hurricane Sandy, many people felt like they were living through

The Walking Dead. How do you think you'd hold up personally?
Robert Kirkman: I don't think I would handle that very well at all. It is kind of bizarre to think about all the different things that have happened over the last few years. It's just terrifying to really recognize how close to the edge we are at times.

GQ: Do you feel like you have had a hand in making comics cool again?

Robert Kirkman: [Laughs] No, I feel like I've been a tremendous benefactor of that movement, but that was going on well before The Walking Dead started getting wide notice. Comics are a fantastic storytelling medium -- I think that because there's not a lot of money in the game, there's not a lot of control hampering that creativity and expression, and I think that people are starting to recognize that some of the newest, most original, and coolest ideas are being explored in the comic medium.

GQ: What's it like to have to work at a writer's table and have the material you write for the comics be adapted by other people?

Robert Kirkman: It's a little bizarre. I'm actively sitting in a room with six other people who are critiquing my work and trying to improve it, which is a lot of fun. We have discussions and we have to bring up storylines that I wrote like seven years ago; being in the room for that can be awkward at times, but I thoroughly enjoy it. It's been a really cool process.

GQ: Do the writers ever want to take it in a direction you don't want it to go?

Robert Kirkman: Not really. There are definitely arguments in the writer's room and different people want to different things and you work together as a group and decide on what the best path is. I don't think there's ever been a case where I've been particularly unhappy with a direction that we're going in. I'm sure it'll happen someday. I'm looking forward to it.

To read the rest of this interview visit GQ.com: The GQ & A: Robert Kirkman, Creator of the Walking Dead Comics