Snow Likes Ashes is the best book I've read so far in 2014. It's got it all - epic travel, forbidden romance and wild, untamed magic.

In fact, I loved the book so much, I chose it as the October selection for Uppercase, a YA book subscription box.

The story follows Meira, one of the only survivors after her homeland, the Kingdom of Winter, was conquered and its citizens enslaved, leaving them without magic or a monarch. When scouts discover the location of the ancient locket that can restore Winter's magic, Meira decides to go after it herself.

Snow Likes Ashes is the first in a 3-part young adult fantasy series by Sara Raasch. I asked her a few questions about strong female characters, the first draft she wrote at 12 years old and what's in store for the rest of the series.

What books have been influential to you as an individual and as a writer? 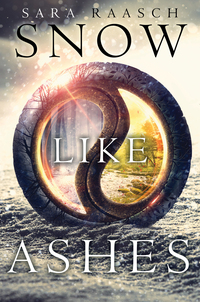 SR: The book/series that has been the most influential to me is Sharon Shinn's the Twelve Houses series. I read these books in high school and fell in love with her world and characters -- everything was so immersive, vibrant, and REAL, and I remember reading it and thinking "THIS. I want to write a book like this!" I still re-read this series when I'm feeling overwhelmed or stressed, because the story and world just feels like home now.

Because Snow Like Ashes is a story you've been thinking about since you were 12, how has it changed from its inception to publication?

SR: It's nearly unrecognizable! The story I wrote when I was twelve is similar to the story now in only a few things -- the Season Kingdoms, the evil Spring King, and the spunky Winterian fighter, Meira. All the other characters and kingdoms changed completely. There used to be dozens of kingdoms; now there are eight. Meira used to live in a small village; now she lives with seven other refugees in nomadic camps. Even the title is different -- it used to be Giving Light, and now is Snow Like Ashes.

Though it may seem like the original draft has no real bearing on the published book, it still has a special place in my heart. Without it, Snow Like Ashes wouldn't exist!

Meira is a strong, fierce heroine who I absolutely adored. Did you take any real life inspiration to build this character?

SR: Meira is who I wanted to be as a teenager. I was terribly insecure and meek, so when I worked on the early drafts of Snow Like Ashes in high school, Meira became this confident, strong character that I could use as a beacon for myself. "See? If Meira can survive the horrible things the Spring King does to her, then I can survive high school."

The world of Primoria is so rich with details. How did you go about creating an entirely new fantasy world?

SR: I feel like I should have some deep, meaningful explanation of intense studying and pondering, but really, I used Pinterest. A lot. I'd make boards for each kingdom, then pin outfits, architecture, food, songs -- piecing together entire cultures. Pinterest is invaluable in this regard, in that I could actually SEE what a kingdom would look like.

As for the specifics: most of the kingdoms in Primoria are based loosely on cultures in our world. The Kingdom of Winter (when it wasn't, you know, enslaved and overtaken) has a Greek-based culture; Autumn, a mix of Arabian and Thai; Summer, African/Islander; Cordell, Nordic/English; Yakim, French/Germanic; Ventralli, Italian, specifically Venetian; and Paisly, Eastern European. The details are sometimes very, very subtle, but these are the overall cultural feelings I was going for in these kingdoms!

What's something you know now that you wish you could tell your 12-year-old self?

What's it been like to hear reactions from fans about your book?

SR: So surreal! For almost thirteen years, this story has been nothing but in my own little head. When people tell me they love Theron or they adored a certain scene, it always throws me for a second, and my initial reaction is "HOW HAVE YOU READ THIS??" in a kind of panic. But it's so amazingly fun to get to talk to people about this book now!

You must give us some hints about what's in store in book 2!

SR: Book 2! Oh Book 2. For one, I'll be announcing the title sometime this winter (yay!). But I've taken to calling Book 2 "The Book Where Everyone Dies," because, well, a lot of people end up dying. *evil cackle*

As for something happy: there's quite a bit more romance at the beginning now, owed entirely to my editor. I wanted to jump right into the stressful bits, but she reined me in and insisted we spend at least a few minutes in happy-kissy-land. So there's that to look forward to!