In her new six-song EP "Reckoning," surf guitar icon Susan SurfTone takes surf rock to a haunting and beautiful place it's never been before. With characteristic mastery, SurfTone gives each song life and depth. From the album's hypnotic opener "Mojo Junction," to its closing "Mystery Train"--a skillful homage to one of her earliest influences--SurfTone shows once again that she's not just the reigning Queen of Surf Rock, but that she could topple any Surf Rock King from his throne.

Kevin McGovern of Fear and Loathing in Long Beach writes, "Reckoning" is:

"Top-ten material in this reviewer's universe, with its notably sharp and slick pop/rock collisions."

I spoke with Susan SurfTone about "Reckoning," her former work as an FBI agent, and what she plans to do next. 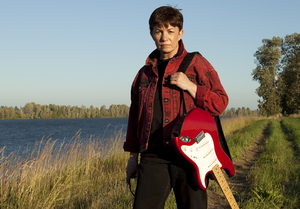 Mary Pauline Lowry (MPL): As someone who has worked in traditionally male occupations, I always wonder about the barriers for women in professions and art forms that are generally male-dominated. How did you get into playing lead guitar? And why do you think there are so few high profile female guitarists?

Susan SurfTone (SS): I was a big Beatle fan at the age of nine. I was a quiet kid who wasn't much of a vocalist so George Harrison was my favorite Beatle and he played lead guitar. Before The Beatles I listened to Elvis Presley and I always liked the guitar breaks. The guitar break on "Hound Dog" is still among my favorites. Elvis' "Hound Dog" really is the first punk recording. I started to take guitar lessons, moving on from the tennis racket that I "played," and it came easy to me. I had a good teacher who made it fun and interesting and recognized that this nine year old girl showed some promise as a lead guitarist.

I still don't think female guitarists get the encouragement to step out and play lead guitar. To be a non-singing lead guitarist and be a woman is still rare. There are some of us but not many. It takes a lot of confidence and you often have to find that within yourself.

MPL: What would you say to young women and girls who hope to play lead guitar?

SS: Get up and do it. Write some music and form your own band. Remember you are a lead guitarist so be a leader. You will be surprised at where you will find support. Some of the best male surf musicians supported me when I started playing surf guitar in 1995. You will hear a lot of criticism. Learn to separate the valid and useful criticism from the nonsense designed to intimidate you and use the valid criticism to become better. Do it and build your confidence. I can't say it enough. You have to be confident in yourself to be a good lead guitarist. 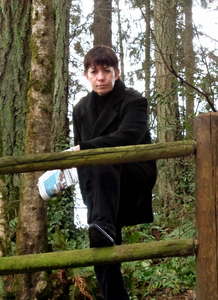 Susan SurfTone
MPL: In almost every story I've read about you in the media, mention is made of the fact that you worked for the FBI. And I know you famously turned in your gun and your badge when you had to choose between the FBI and a gig at the legendary CBGB in Manhattan. Is this something you still enjoy talking about, or do you feel more like, "I'm a guitarist now, not an FBI agent. Let's move on already?"

SS: I still enjoy talking about my stint as a Special Agent for the FBI. The training and the responsibility of the job were important in my career as a lawyer and as a musician. It helped me learn to focus and function in a male-dominated world. It just wasn't a place where I wanted to stay. I felt I was wasting the talent I had been given and that had to change. John Lennon's murder woke me up to the fact that he was high among my true heroes and I really wanted my life's work to be music. I wanted to start a band when I worked for the Bureau in NYC and I wanted to play at CBGB's. I asked my supervisor if that would be okay with the Bureau. He said no and about six months later I quit to play CBGB's. 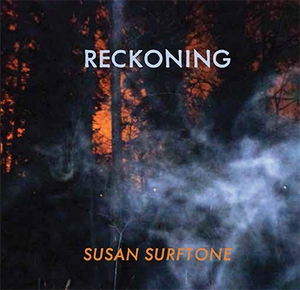 MPL: The reviews for your new album "Reckoning" are phenomenal. An example of that is Peter Roche's review in the Cleveland Music Examiner. I'll read you the quote I like best: "Reckoning is twenty-five minutes of intimate, authentic surf rock bliss whose DIY methodology and deliriously accessible tunes celebrate how far SurfTone has come - and hint at where she may go next." What do you like best about "Reckoning"? And where do you plan to go next?

SS: I think "Reckoning" establishes an identifiable sound for me. Producer Steve Kravac and I have worked together on three CDs now and I think we hit the place where we have something unique. Steve also plays drums on the recordings. I think my writing is getting stronger. I play bass on my recordings too and that has helped a lot with the writing.

I just got back from LA where I recorded three new songs with Steve. Those will be released next year either as singles or maybe I'll write three or four more and do another EP. As long as my musical career keeps moving forward I'll stick with it. I do have a feeling in the back of my mind that there is yet another road to take. Something new that I haven't tried before. New challenges are always fun.