In this ongoing series, I talk with thought leaders about ideas and trends in the environmental movement.

Next in the series is my conversation with New York Times columnist Timothy Egan. 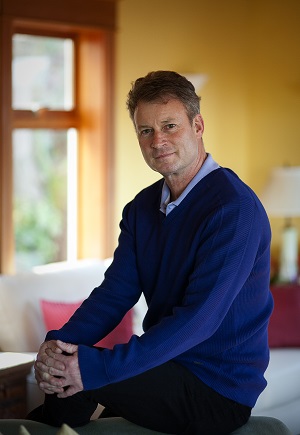 Mark Tercek: Your work covers a range of subjects, but your passion for conservation and the American West are recurring themes. What led to that interest?

Timothy Egan: I've always loved the outdoors. And, as a third-generation Westerner, I have the greatest outdoor environment in the world as the source of my passion. When I was growing up, in a big family with little money and certainly no summer home, my family would go camping in Montana, or Idaho, or the Washington Cascades. My mother always said we were rich -- because of the public land domain, the parks and national forests. That was our summer home.

Mark Tercek: From your perspective, what is the environmental movement doing well? What could we do better?

Timothy Egan: I think environmentalists have done a very good job at sounding alarms early on, and then finding a narrative to connect the public to it. But this cuts both ways: You can cry wolf too many times, and then the public stops listening. In this same realm, I think one of the biggest things going on now is restoration. We see rivers running clean and almost wild again. Salmon runs have been restored in the northwest. Clearcut slopes are recovering. This narrative of restoration is a positive story that balances the alarms.

At the same time, the movement could do more to expand its base of support, speak more to people who aren't professional environmentalists. This nation is full of birders and anglers and hunters and hikers -- all part of the natural constituency of the environment.

Mark Tercek: You've written about two environmental disasters -- the Great Fire of 1910 and the Dust Bowl -- and their roles as turning points in the conservation movement. What can we learn today from those events?

Timothy Egan: Both of these catastrophic events are with us still. The fire set a pattern: thereafter, the Forest Service tried to put out every fire, or nearly so. This led to fuel buildup and some of the problems we have today. Fire is part of nature -- I think most land managers finally accept this. But what's tragic is that in 1910's Big Burn and today we still lose human beings in blow-ups, and people should never have to die saving a summer home, or even a forest.

The Dust Bowl was a mini-climate change event. People say you can't change the climate -- we did, in the 1930s, altering an entire area. The Dust Bowl was the worst man-caused environmental disaster in our history. We've learned some lessons about soil conservation and restoring our grasslands (I particularly like The Nature Conservancy's prairie preserve in Oklahoma). But we haven't learned some other lessons: that of hubris, of not respecting nature. Under that dust bowl is the vast Ogallala Aquifer, which is being drawn down at an unsustainable rate, a rate that will leave much of that area uninhabited. That's a lesson not learned.

Mark Tercek: A few decades from now, I suppose you may write a book about today's natural disasters -- climate change, Hurricane Sandy, record droughts and floods. What do you hope the storyline will be?

Timothy Egan: There was a great t-shirt that appeared after the Bay Area earthquake of 1989: nature bats last. That's what I hope the storyline will be. But it could be: science denial wins.

Mark Tercek: As a vocal critic of the current gridlock in Congress, what's your advice for rebuilding bipartisan support for conservation?

Timothy Egan: Yes, this has never been a partisan issue. The leading early environmentalists were all Republicans -- Teddy Roosevelt, foremost among them. The way to make it bipartisan is to convince people that the consequence of doing nothing hurts all of us. There is no such thing as a red or blue state environmental event; the victims are not from one party, one region.

Mark Tercek: You've said that the American West has always been a struggle between possibility and possession. How do you see that struggle playing out today?

Timothy Egan: I'm erring on the side of optimism on this one because I've always believed Wallace Stegner's maxim that the West is the geography of hope. Twenty years ago, issues like old growth forests, salmon and endangered species were considered intractable. Now, we have broad successes in all those areas.

Mark Tercek: You are a big advocate for public lands conservation. This is an important strategy for The Nature Conservancy, but we also think the private sector can play an important role in addressing environmental challenges. What do you think of this strategy?

Timothy Egan: It's a great strategy. Some of the best things to happen in our shared spaces have come from private donors stepping in, finding a steward like The Nature Conservancy, and then restoring or protecting the land. The feds are weak right now, because of the deficit and fiscal restraint and political gridlock -- all the more need for the private approach.

Mark Tercek: You are a master storyteller in your writing. What advice do you have for conservationists as we try to tell our story better and build more support for our cause?

Timothy Egan: Good question. We're a narrative people, a narrative nation. No great public policy triumph has come about without connecting policy to story. That's what Teddy Roosevelt did after the Big Burn -- and it saved the national forests. That's what Franklin D. Roosevelt did with Dust Bowl -- and it led to grassland restoration and the Soil Conservation Service. All of these issues are so much more engaging if you put them in the perspective of our ongoing national story.

Timothy Egan worked for The New York Times for 18 years—as Pacific Northwest correspondent and a national enterprise reporter. He now writes an online opinion column for The Times. In 2001, he was part of the Pulitzer Prize-winning team that wrote the series "How Race Is Lived in America." He is the author of several books, including "The Worst Hard Time," a history of the Dust Bowl, for which he won the National Book Award, "The Big Burn: Teddy Roosevelt and the Fire That Saved America" and, most recently, "Short Nights of the Shadow Catcher: The Epic Life and Immortal Photographs of Edward Curtis."