Born in Canada, raised in the South, and now living in the writer's paradise of Greenpoint, Brooklyn, Wells Tower offers a fresh ear for dialogue and well-researched characters drawn from seemingly anywhere and any time. Last night, Tower won The New York Public Library's Young Lions Fiction Award for his debut collection of short stories, Everything Ravaged, Everything Burned. And just before that, Library staff made up a reason to interview him without spoiling the surprise. 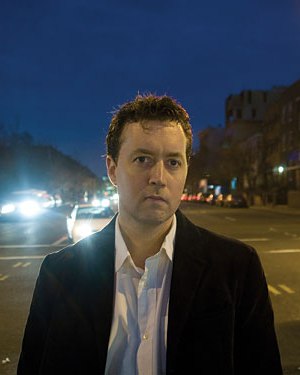 Wells Tower is a great name for a writer: it evokes loftiness and depth! Was this deliberate on the part of your parents? A lucky accident?

My parents claim that they just sort of cobbled it together without deliberate intentions of designing this weird, prepossessing edifice of a name. For years, I was sure they'd stolen it from a soap opera character. I have a hard time cashing checks. The tellers suspect I'm trying to embezzle from an investment firm.

What attracted you to some of your characters - say, Vikings, or failed inventors?

I suppose I keep an eye out for characters in sufficiently precarious straits that the events in the story may alter them (the characters) in some lasting way. Why? I think it was my high school English teacher who said, "They don't make movies about people who don't get hit by cars."

You researched some of the stories in Everything Ravaged, Everything Burned at The New York Public Library. What was the most interesting fact or idea you uncovered?

The least appetizing revelation had to do with an Old Norse culinary movement that called for dining on the contents of your eviscerated enemy's stomach.

You're returning to the Library in September to start a fellowship at the Dorothy and Lewis B. Cullman Center for Scholars and Writers. What will you be researching/writing about?

The crash of '29, the recent economic calamities, lots of other stuff.

You seem to have a bit of a tortured relationship with technology, having called the Internet "a f__ing curse." Can you elaborate?

Oh, I guess I feel like it's a f__ing curse because if you accidentally emit some doltish blowhardism like "The Internet's a f__ing curse," it might wind up on someone's blog and get quoted back to you in an interview. My main gripe with the web is that it's toxic to the kind of concentration fiction writing requires. It's difficult to write good sentences and simultaneously buy shoes.

Wells Tower's stories and articles have appeared in The New Yorker, Harper's, McSweeney's, The Paris Review, GQ, and The Washington Post Magazine, among other publications. Tower has received the Plimpton Prize from The Paris Review and two Pushcart Prizes; he was named Best Young Writer of 2009 by the Village Voice.