It's not everyday that you get to see a small upstart emerge in the luxury market, let alone a heavy hitter. According to our sources Qatar will launch its own brand and its own luxury boutiques around the world. That's it!

The Huffington Post has obtained the name of this self-proclaimed luxury brand, as of yet kept secret: QELA. Given the virtually unlimited financial means of the Qataris, established brands such as Hermes, Dior and Louis Vuitton are not likely to take this news lightly.

Caroline Guillon, the marketing director of Qatar Luxury Group, which launched the brand, told The Huffington Post, "Since its inception, the goal of our group has been to create a fashion brand in Qatar, and then, in time, expand to an international vocation. We are currently working on the collection." However, for the time being, Guillon preferred "not to disclose the name."

This information came from the other side of the Atlantic when a source close to the project confided that Qatar is actively seeking commercial space in New York for a luxury boutique. Several real estate agents have been retained by the Qatar Luxury Group, which is owned by the Qatar Foundation. A commercial real estate specialist in Paris confirmed the group's interest in New York space. The new entrant is also searching for premises of at least 500 square meters in the French capital, with a preference for the fashionable rue du Faubourg Saint-Honoré, which already hosts Dior, Louboutin, Hermes, Lazzaro, Prada and Dolce & Gabbana.

"We are actually looking a little more closely at New York and Paris, but our priority is the store opening in Doha," Guillon said. "Otherwise, no date has been set."

Ultimately, the launch could include more than ten cities including Paris, Los Angeles, New York, Milan, London, Tokyo, Hong Kong, Singapore and, obviously, Doha. Each of these stores would exclusively sell the brand. This project involves creating the stores as well as the products. The objective is to launch at the end of 2012.

But in reality, it will take a few more months. Not all of the commercial sites have yet been found. Accordingly, it is unlikely that leases will be negotiated and shops installed in just four months. "In my opinion, it is too late for the end of year," says a close affiliate. "The project is not yet fully put together, there are still too many unknowns."

"We have filed for trademarks in many countries to date so that no one will be able to take the name," Guillon says. "But our priority is launching in Qatar. This will start as a local brand. Do not expect a launch with great fanfare or fireworks ..." In Doha, the goal remains to launch by the end of the year, but as always, construction is never free from delays.

In Doha, things seem well underway, as recruitment has already started. The name of the future luxury brand is referenced within an announcement of the famous Michael Page recruiting firm: 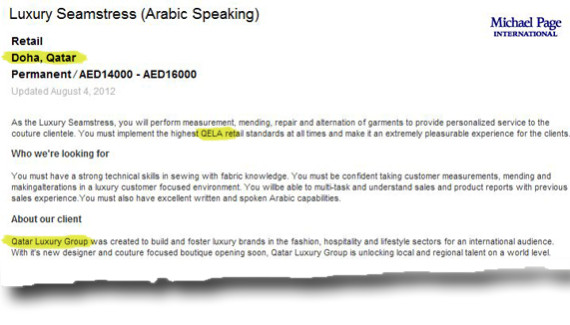 "As a luxury seamstress [...] you must meet the highest standards of quality QELA demands at all times," details the announcement from the Qatar Luxury Group. The employment announcement is dated Aug. 4, evidence that the pace of development for the brand is accelerating. "Our main shareholder is the Qatar Foundation, which has a mission to educate young Qataris," Guillon said. "Our future brand will allow us to train some in the luxury sector."

The concept of launching Qatar's own luxury brand obviously crossed the mind of the head of the Qatar Luxury Group several years ago. In fact, the brand and logo were registered as trademarks in the United States on Oct. 21, 2009:

Initially, this trademark was registered for textiles and cosmetics, such as essential oils, perfumes, colognes, potpourris, creams, deodorants, lotions, false eyelashes, beauty masks and so on. But on May 2, the trademark was extended to include a broader category of products. Now the Qatar Luxury Group can also market the following products under the QELA brand:

Of course, obtaining a trademark does not necessarily mean that all of the products listed will be sold, however, it does reserve the right to sell such products in the future and further prevents competitors from usurping the name for a similar line of products.

The brand was filed in Switzerland in October 2009 with a brand registration dated March 25, 2010. A deposit was also recorded in France at the INPI (National Institute of Intellectual Property).

The group also took the initiative on the web. The domain www.qela.com was filed on June 13, 2002 but has been updated as recently as June 7.

Qatar Already Had One Foot in the Luxury Market

Qatar's interest in the luxury market is nothing new or surprising. But it has been several years since the Qataris have been involved in this market through their many investment funds, particularly in France. On March 16th, it was disclosed that Qatar had a 1.03 percent stake in LVMH through its investment fund Qatar Holding.

The gas-rich Gulf Emirate has also bought up numerous luxury hotels, such as the Hotel du Louvre, the Royal Monceau Hotel Lambert and the Concorde Lafayette in Paris, the Martinez and the Carlton in Cannes and the Palais de la Méditerranée in Nice. The Qataris have also participated as a 6.39 percent holder of the Société des Bains de Mer, which owns four luxury hotels in Monaco. Finally, Qatar, through the Qatar Luxury Group, has become the majority shareholder (52.6 percent of voting rights) of Le Tanneur, the French handbag manufacturer.

All these investments have certainly helped Qatar gain experience in the luxury market. Several French people have gone to work for the Qatar Luxury Group. Gregory Couillard directs both the Qatar Luxury Group and Le Tanneur. Is this sufficient to create a luxury brand? This remains uncertain.

Despite the enormous financial resources of the Qatari family, branding cannot be decreed. This is all the more true given that the most well known luxury brands have earned their stripes over decades.

"We'll see how they position themselves, but they do not have the aura of an Hermes or a Louis Vuitton," says one expert. "There is a probationary period in which a brand transitions from new to trendy to luxury."

Starting prudently at first in Doha, and then transitioning to New York and Paris demonstrates that the Qataris are not skipping steps. One thing is certain, we have not heard the last of them.

Mascots For Paris Olympics Criticized For Being Mostly Made In China