Street Artist QRST is back on Brooklyn streets with more modernly magnetic and captivatingly surreal work than before, and just as mired in the muck of human dynamics as ever.

Emblematic of the new street art storytelling practice we have been highlighting for a few years now, these uniquely old-fangled pieces are one-off bits of mastery that can take days, sometimes weeks, to sketch, draw, and paint before they are wheat-pasted onto street walls for a certainly uncertain future. In fact, when reached for comment on these new street pieces, the artist tells us that we missed one entirely because it was torn down the very night that it went up. Thankfully, the artist could provide a couple of studio images of the short-fated painting.

Aside from compelling imagery, saturated hues and a greater modeling of dimension, texture, and material in the new work, the near crushing weight of these paper-thin pieces comes from the personal stories that motivate them. Unsurprisingly, much of the work of an artist is autobiographical -- in fact one could argue that all art is, whether it is fiction writing, stand-up comedy, painting, or architecture. 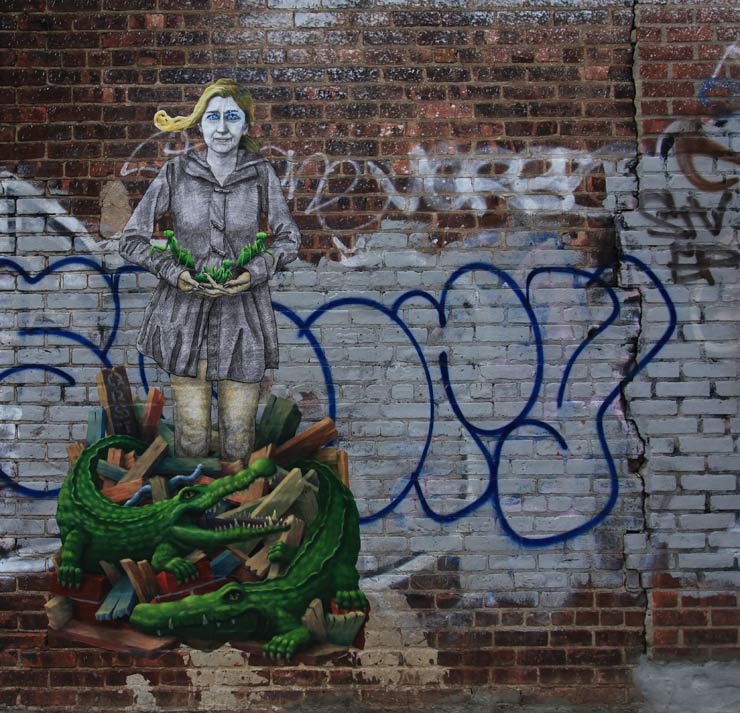 We spoke with QRST about the works and found that some of the personalities and issues he is addressing are so contemporary and specific that they amount to a public calling-out of a few people. While the artist can be sharply descriptive of the individuals and relationships at play at the center of these stories, he's trying to take a more universalist approach to the themes, for now. And you wouldn't want to pry, would you?

"I wasn't really planning on divulging exactly why they are what they are, as the ideas in the paintings aren't really flattering," says the artist, as he recounts relationships falling apart, friendships going up in smoke, and people "standing in piles of wreckage, surrounded by and covered in symbols for the less laudable traits that people tend to present in these sorts of situations." 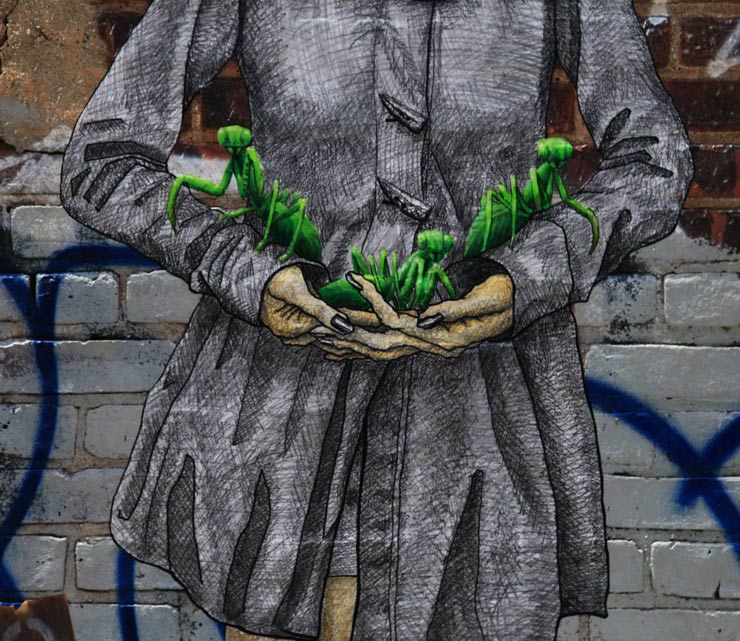 As diplomatic as he aims for in his recounting of their creation, these symbols wield their own power, and his work continues to reference the historical, modern, and personal interpretation of their meanings for his integrative interactions of peculiarity. "The crocodiles are there for their tears," he explains as the litany begins its roll, "They're also monsters climbing through wreckage -- they live in the murk and strike when you aren't ready. They're cold-blooded and concerned only with their own affairs (which seem to be eating and lurking in the mire)." 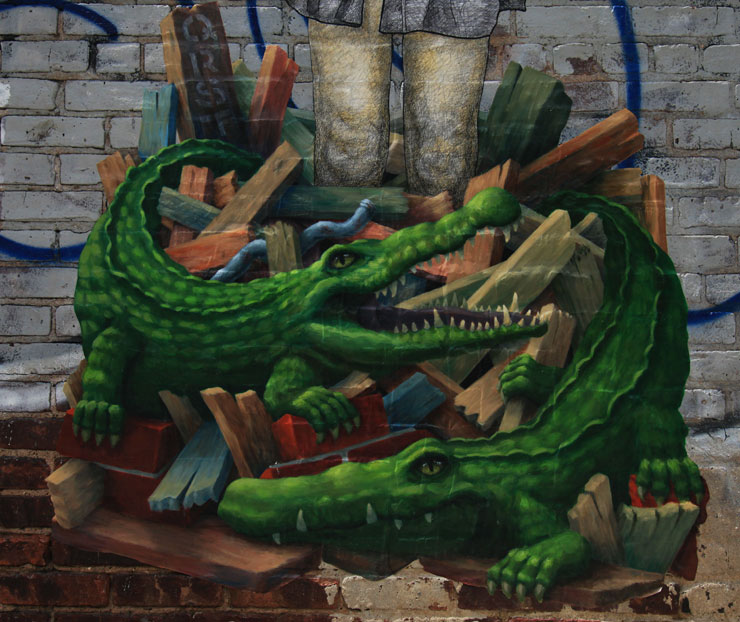 As he describes the work you can feel the turbulent emotions washing over the newly dried paintings, now carefully cut out and wheat-pasted on public walls for the average passerby to gaze upon. "Similarly the praying mantis is a dangerous eating machine that even kills and eats its mate. Both are cold, unfeeling, and impossible to reason with. They take. The buffalo are stubborn -- in many situations a water buffalo is a symbol of loyalty, which sickens into stubbornness, stubbornness beyond reason," he says as he winds out the list of animal players. "The buffalo is accompanied by the birds; one cawing, nagging, incessant, the other aloof."

While you may know your local Street Artist, the majority prefer to stay anonymous and the nature of the act of hitting and running means that you won't get an explanatory placard nearby and the meaning of the work is not always evident on its face, even when it is in yours. While some of the new crop is moving to refract their work through a cubist prism today on the street, few are becoming more hand-hewn and focused, precise in their sentiment and personal.

As graffiti and public murals and advertising and Street Art have continued their dance together over the last few decades, the street has become a stage for public airing of the political and the personal. Where a relatively new artist like QRST is concerned, his intentions will always be up to your interpretation and can be as general as you like, even while he is feeling fairly specific. "The meaning I'm hanging on them is esoteric and personal to me in such a way that others are going to take what they need from it. This might be something completely different, which I like quite a bit."

The companion piece of the work above was taken down from the street, still wet and under the cover of the night before we got to it. The artist sent us two detailed images of it, shown below while still in production at his studio. 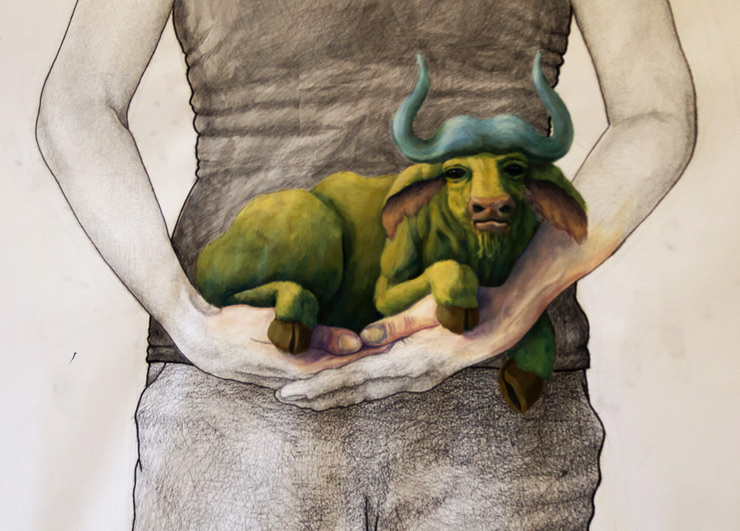 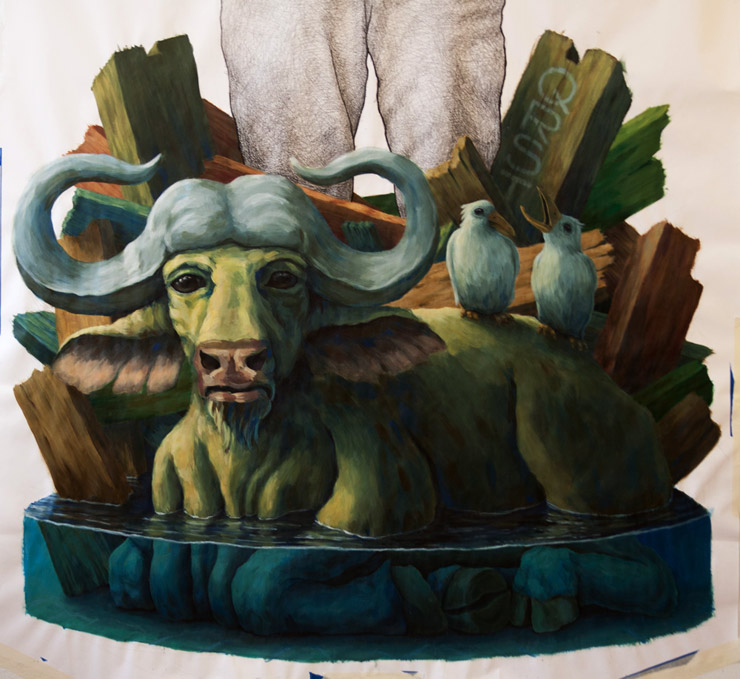 A third piece from QRST arrived recently as well, an image of a ram and man merged, sitting in a yoga stance upon the opened blossom of what may be a large lotus flower. He says it's difficult to talk about mainly because, "I don't think I've totally figured out what it's about." The comment reveals another part of the QRST process, which he sometimes has described as being subconscious, the discovery of a work's meaning coming after its completion.

But this much he knows: "It comes partly from an urban legend from around where I grew up, that probably exists in a number of places, about a Goat Man that haunts a giant train bridge," he says as he recalls the story. "In the misspent portion of my youth a few of my friends and I spent a fair amount of time thinking about the Goat Man. We left him cigarettes under his bridge," he says with a sort of revelatory glee. 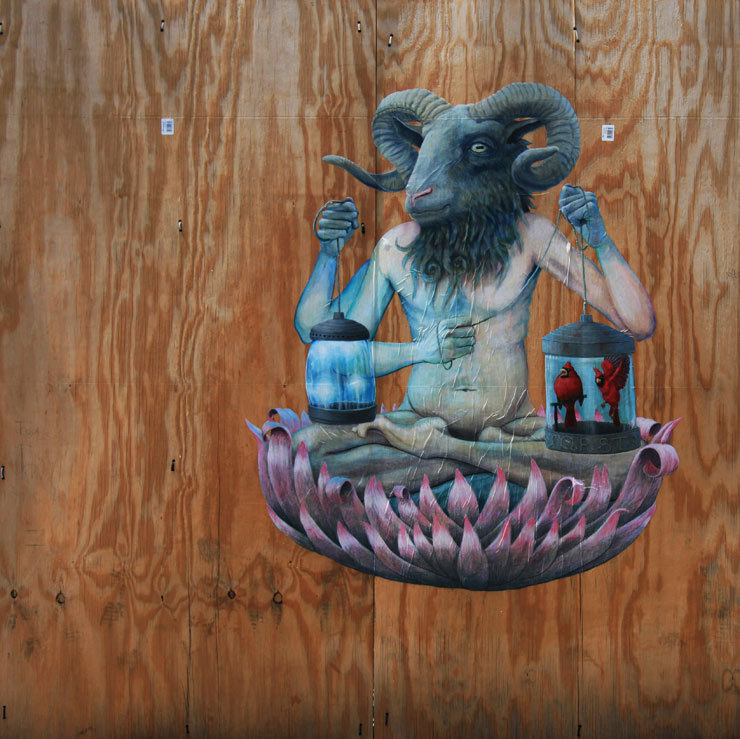 He muses about the possible meanings -- an imperfect patron, a flawed protector, even a deity. "I'm starting to feel like I'm talking about God here, but I assure you I'm not." Finally, he settles on his own interpretation of the figure and lets you figure of the rest of the symbols. "The Goat Man was our patron of 'getting away with shit we shouldn't have been doing.'"

The glass case of cardinals, the lantern, the three arms, or why he is riding a lotus? It's up to you.

"I think there's also a joke in there someplace, but it's probably only funny to me." 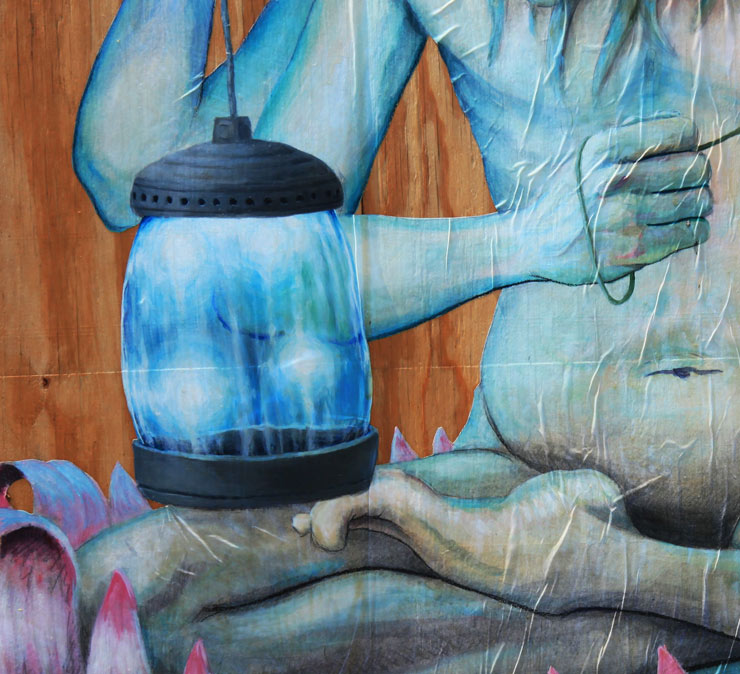 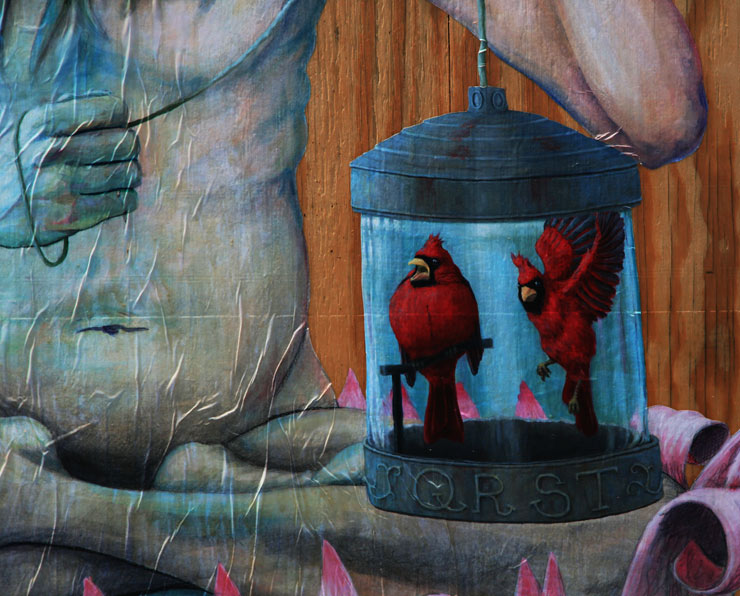