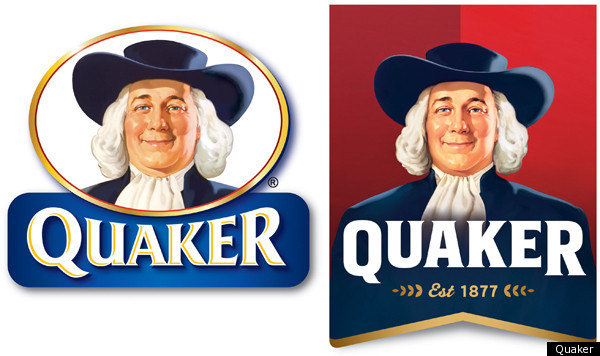 Larry, the plump mascot that has adorned the packages of Quaker foods for the past 135 years, has gone on a diet. And maybe gotten a little Botox.

The Wall Street Journal reported Wednesday that the image, known for his trademark navy hat and cherubic smile, was redesigned for 2012, making him look "about five pounds" thinner.

The changes are subtle; you can just barely notice them in the side-by-side comparison above. Having trouble? First, look at the ruff of Larry's shirt. It's noticeably wider, and slants further to the left, in the old logo, hinting at rotundity in the midsection below the picture. Right above the collar, you can see that Larry's neck has gotten more slender, with less of a pronounced double chin than before. His hair is shorter and his jawline is more defined. There are also slight tweaks throughout his face, which give lend a slightly younger, healthier aspect than the old Larry.

The Journal explained that the makeover was designed to reinforce the idea that oatmeal is a healthy option for breakfast.

The rest of the logo also saw changes. The typography is somewhat cleaner, with smaller serifs than before, and the main background color is now red rather than blue. If you're already sold on Quaker Oats, though, don't worry: the stuff inside the box hasn't changed a bit.

Watch an ABC video report on the changes: