Recently, the new "many interacting worlds" (MIW) theory of quantum mechanics has received a lot of popular press, in venues such as Nature, New Scientist, and The Huffington Post. This theory provides one possible explanation or interpretation of the "weird" phenomena observed in quantum experiments.

I'm writing to explain in basic terms how I was led to create what has come to be called MIW theory, how it works, and what it might mean. I stress at the outset, though, that this new theory does not prove anything definitive about the true nature of quantum reality, at least not yet. That's because no experiments have been performed that distinguish the predictions of MIW theory from standard quantum theory.

What MIW theory does do is to significantly broaden the scope of what might really be out there. That's because other interpretations of quantum mechanics assume the existence of a special kind of quantum wave called the "wavefunction." MIW theory, on the other hand, makes the same predictions without using any wavefunction.

Earlier, mathematically related work can be found here and here.

The Meaning of 'Many Interacting Worlds' Theory

According to MIW theory, quantum reality isn't a wave but a collection of parallel worlds. In each of these worlds, every object has very definite physical attributes, such as position and momentum. Within a given world, objects interact classically (i.e., according to the ordinary "Newtonian" physics of our macroscopic experience). But in addition to this, nearby worlds also interact, and it's this world interaction that gives rise to all quantum phenomena observed in nature.

What do we mean by a "nearby world"? This means a world that has all the same objects or "particles" as our world, in nearly the exact same positions, as in the figure below. The particle "copies" that live in the other world need to be very near the "originals" in our world in order for the two worlds to interact quantum-mechanically. The distance between each particle and its copy must be essentially on the nanoscopic scale.

On the other hand, the different particles themselves do not need to be close together in order to experience quantum effects. Distant particles can be indirectly correlated, owing to quantum interactions with a nearby world. This is how MIW explains or interprets the phenomenon known as "quantum entanglement." 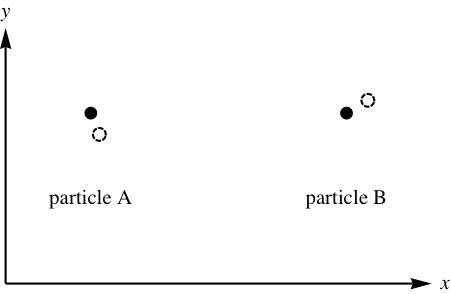 A and B are two "entangled" quantum particles. A measurement of particle A correlates instantly with a measurement of faraway particle B, which seems to violate relativity. (How can A get a signal to B faster than the speed of light?) MIW describes this as follows. The two black discs represent particles A and B in our world. There is also a neighboring world in which A and B also exist, but at slightly displaced positions (the open, dashed circles). The two worlds interact because they are close to each other, even though the two particles are far apart.

In 1957, Hugh Everett III published what is now called the "many-worlds interpretation" (MWI) of quantum mechanics. Everett's theoretical contribution was truly amazing, way ahead of its time. It set the stage for applications such as decoherence, quantum computing, and quantum information that are now at the frontiers of modern science. But Everett himself spoke not of "many worlds" per se but of the "universal wavefunction." In fact, the "worlds" in MWI are not so well defined, because the underlying mathematics is that of the standard wave-based quantum theory.

In contrast, in MIW theory, the worlds are built into the mathematics right from the start. By itself this is not remarkable; anyone can invent a worlds-based theory. The tricky part is to construct such a theory that's mathematically equivalent to standard wave-based quantum mechanics and therefore agrees with existing quantum experiments.

Ironically, when I first created MIW theory five years ago, I was not trying to invent a new interpretation of quantum mechanics -- much less one based on interacting parallel worlds. I was trying to develop an efficient method for solving quantum problems on computers, using "quantum trajectories." Suddenly, it hit me how you could get everything from the trajectories themselves without actually needing a wavefunction at all. So this was the first step, working out the trajectory-based mathematics, to replace the wavefunction-based mathematics. But then, in thinking about what these many trajectories really mean, it became clear that they could be interpreted as many worlds.

I published all of this in a 2010 Chemical Physics paper and then started a collaboration with mathematician Jeremy Schiff at Bar-Ilan University. Working with Jeremy has been just great; together we cleaned up the equations and wrote them in a more general and useful form, which we published in a 2012 Journal of Chemical Physics article entitled "Quantum Mechanics Without Wavefunctions." With over 20,000 downloads, it's one of the most downloaded papers in that journal's history.

More recently, other physicists -- and even philosophers, such as Charles Sebens at the University of Michigan -- have become involved, which I am very pleased to see. Australian physicist Howard Wiseman of Griffith University recently published a Physical Review X article for which I was asked by the journal editors to write a commentary. Wiseman and his coworkers have provided some new mathematical developments that may help improve the computational performance of our MIW approach, thus coming full circle back to my original goal.

Isn't this many-worlds idea all just speculation, or otherwise made up?

It is not just "made up," because our MIW mathematics is equivalent to that of standard wavefunction-based quantum mechanics and therefore agrees with experiment. Though it makes no new experimental predictions at present, it does offer a different way to interpret quantum phenomena. However, there is currently no way to say for sure which interpretation is "right." So in that sense, the existence of many worlds might indeed be regarded as speculative -- but the same could equally be said of the wavefunction!

The many-worlds idea has been around a long time, so there is nothing new here, right?

MIW is a new theory. The older MWI picture has both very different mathematics and different world behavior. For example, MWI worlds continually "branch" into new worlds over time, and also, they do not interact. MIW worlds do the exact opposite: They never branch, and of course they do interact. Also, the core idea that you can do quantum mechanics without wavefunctions is very different from other interpretations.

Since parallel worlds are allegedly being created all the time, why would the fact that I put my right foot on the floor cause another universe to pop up?

This does not happen in MIW, only in MWI.

The problem with quantum theory is that anything is possible, right?

Not true, despite the impression you might get from popular treatments. Even in quantum theory, you always have to agree with phenomena observed in experiments. However, there does appear to be more "wiggle room" for interpretation in quantum mechanics than in other areas of physics -- to which we have now added a bit more.

Does MIW provide direct evidence for the existence of parallel worlds?

That's correct, at least for now. This is a new interpretation, which does not necessary replace older interpretations, but has a valid place living alongside them.

If it works this way, then we can "talk" with other universes. Eventually we may be able to visit or at the very least have an avatar.

Neat idea, but not quite what happens. Only very nearby worlds interact, which are imperceptibly different from each other. If a "signal" were sent from one world to another that was large enough to significantly change the state of a human brain, say, then the two worlds would become too far apart to communicate further.

If the many worlds are real, "where" are they, exactly?

Well, the mathematics does not quite answer this question. But probably it makes sense to think of each "other" world as belonging to an identical physical space as "our" world (as indicated in the figure) -- identical, but not necessarily the same.

Professor in Chemistry and Physics at Texas Tech University. Doctorate in Theoretical Physics from the University of California, Berkeley.