Why Francophiles Are Flocking to Nouvelle France 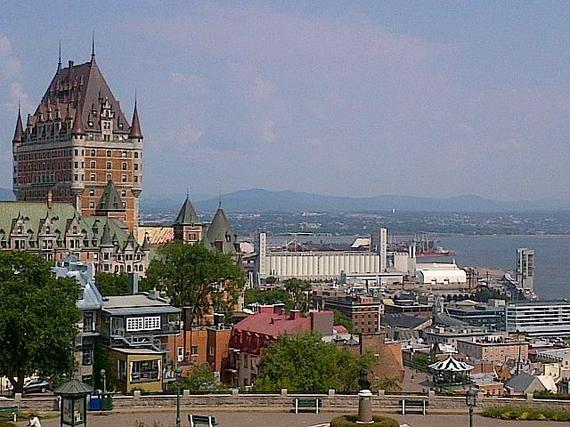 Why yearn for "April in Paris" when you can hum "Ete in Quebec" all season long. There may not be "chestnuts in blossom," but there's no need to cross the Atlantic to stroll the boulevards, practice your French, and linger at "holiday tables under the trees." The 400-year old outpost which was founded as Nouvelle France, now a UNESCO World Heritage Site, is thriving and one of the most charming, romantic -- and active -- cities in all of North America.

The lower part of town along the riverbank, where the city originated as an important St. Lawrence port, has been transformed into an enclave of meandering streets, art galleries, antiques shops, and boutiques set up in authentic stone buildings. Above on the bluff where colonial residents sought civility from the rough port trade, picturesque shops and galleries lead to the site of the battle where British forces overwhelmed and expelled the French on the Plains of Abraham in 1759, now a spacious national park and the scene of numerous reenactments and public events.

Besides its renowned Winter Carnival, Quebec hosts festivals all year long. An invitation to July's major music celebration was the opportunity to experience the myriad charms of a city which also gives rise to -- feelings "no one can ever reprise." 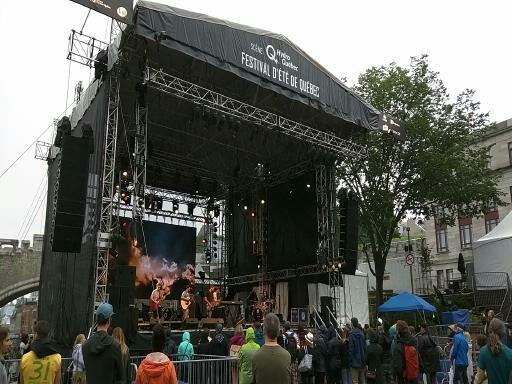 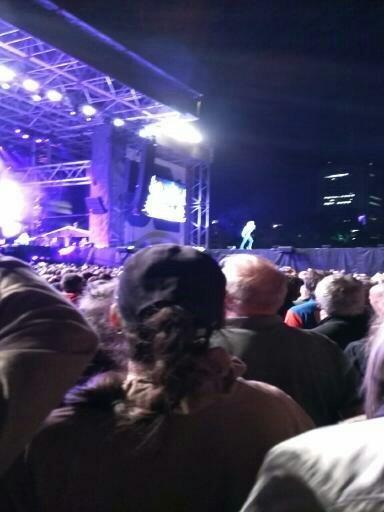 That dot in the background is Mick Jagger strutting on stage 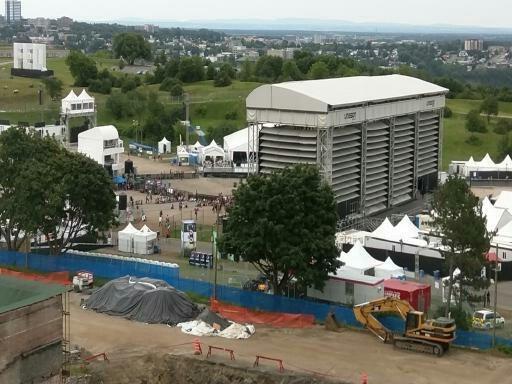 Mainstage concert venue
ATTEND A FESTIVAL
Centerpiece of the summer is the eleven-day music extravaganza that is the
Quebec City Summer Festival with international stars performing in three outdoor venues and on the streets -- over 300 acts in all. Attendees this year could see the Rolling Stones, Foo Fighters, Iggy Azelea, Megadeth, Deep Purple, Keith Urban. The charge for a pass covering all performances was around $80 US -- less than $10 per day!! 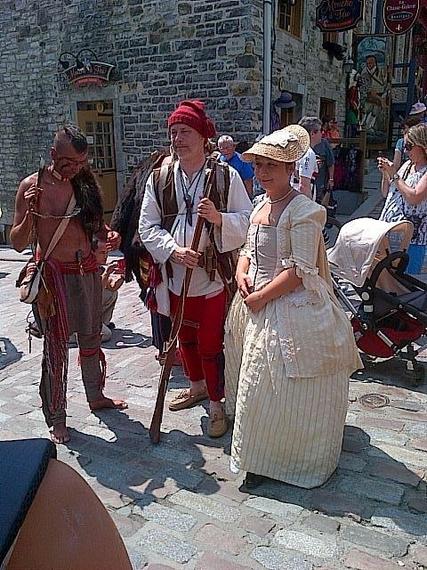 August sees the colorful Festival de la Nouvelle France when the streets are crowded with participants wearing historic costumes, Quebec City Day commemorating the founding of the municipality, over 100 artists and craftspeople exhibiting at Plein Air Quebec, and other festivals devoted to opera, beer, Bordeaux wines, jazz, and Celtic culture-- and free fireworks spectaculars on six summer evenings. If Paris is the "City of Lights," Quebec is the "City of De-lights." 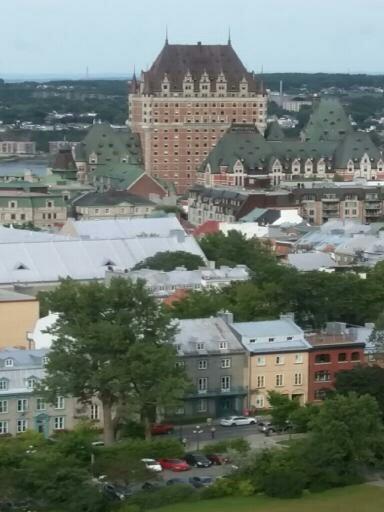 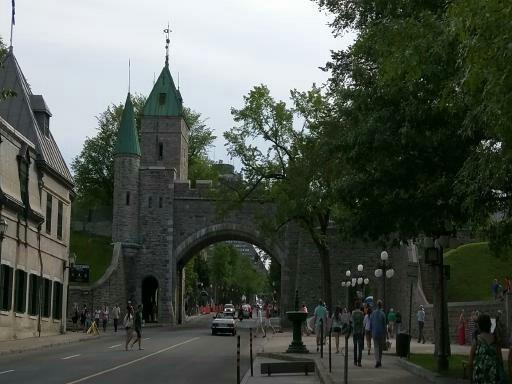 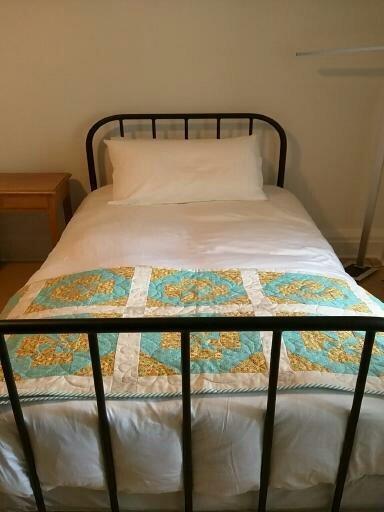 Augustine Abbey bedroom
ADMIRE HISTORIC BUILDINGS
From stone buildings with corners rounded so goods unloaded from ships could pass through the narrow streets undamaged to roofs evolving from fire-hazard cedar to shingle and finally metal the city's architecture tells a story, a colorful theme exemplified by the reconstructed city gates and the turrets and exaggerated Mansard roof of the iconic Chateau Frontenac Hotel which towers over town. Opening this summer, the renovated 17th-century Augustine Monastery has been converted to a hotel and holistic center where guests attending wellness sessions can check into simple rooms where abbesses once resided. 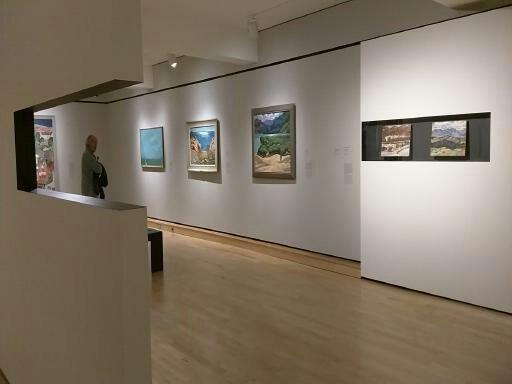 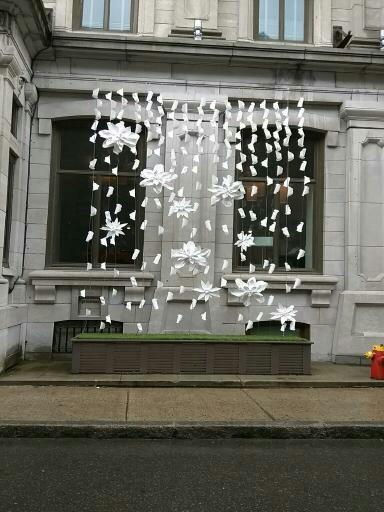 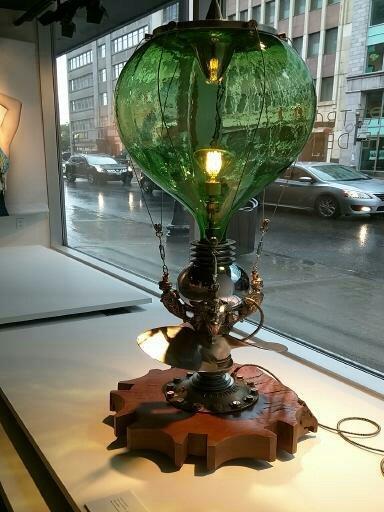 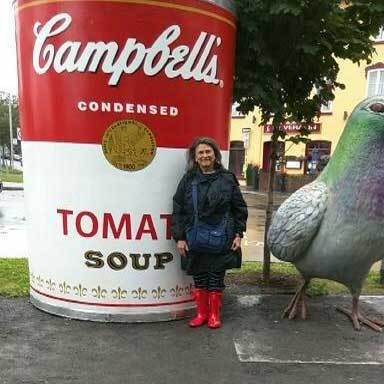 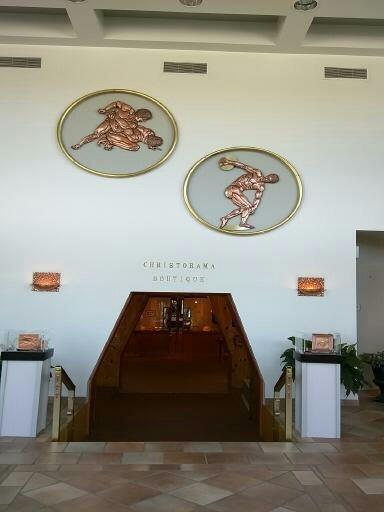 Albert Gilles Copper Art Studio
APPRECIATE ARTWORKS
Housed partly in an historic prison, the National Museum is expanding into larger quarters. Art installations are scattered throughout city streets, often interactive to engage passersby. Art galleries, many housed in renovated buildings, showcase paintings and sculptures by local artists, craftspeople, and Inuit artists. Just outside the city, the skilled artisans of the Albert Gilles Copper Art Studio demonstrate the unique copper repousse method used to create church doors, plaques, jewelry. Visitors can view exhibits in the studio's museum and are given the opportunity to try the technique for themselves. 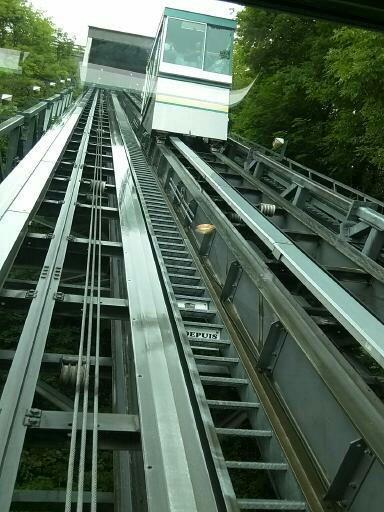 Carriage tour of the city 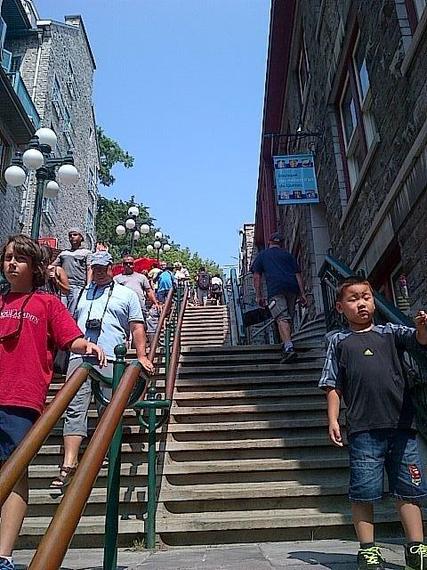 Sidewalks Have Their Ups and Downs
GETTING AROUND
A handy finiculaire connects the upper and lower sections of town, but the city's multi-levels require visitors to step lively -- often up literally dozens of steps. Horse drawn carriages clip clop around town and the sightseeing Bus Rouge loop offers hop-on-and-off service with stops at the Citadel, Musee des Beaux-arts, and the Place Royale. Visitors can take to the water by trying the municipal ferry across the St. Lawrence or climbing aboard a Croisieres AML vessel for a bilingual cruise with breathtaking views of the city. 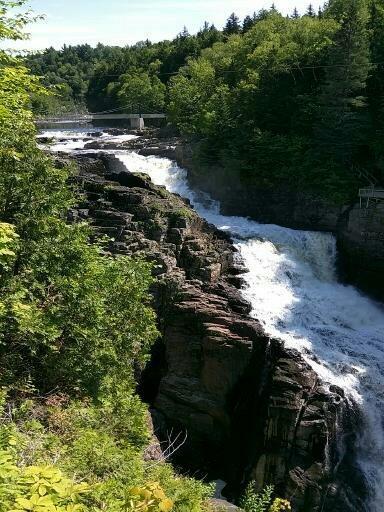 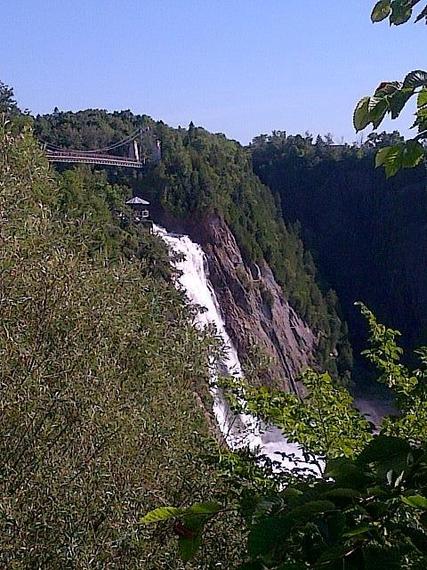 Bridge over Montmorency Falls
ENJOY OUTDOOR RECREATION
Besides walks around the city walls and the Plains of Abraham, several sites for hiking and outdoor activities lie within half an hour of the city limits. Montmorency Falls, almost 100 feet higher than Niagara, plunges to the St. Lawrence near the bridge to vernal l'Ile d'Orleans where travelers can visit farms to sample local wines, raspberry cassis, berries, and apples. Another waterfall gushes through the Canyon Ste-Anne which visitors cross by zip-line, rock climb with ferrata safety cables, or merely stroll around the picturesque perimeter. 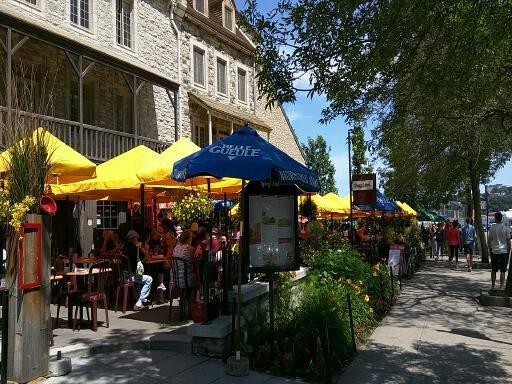 Holiday tables under the trees... 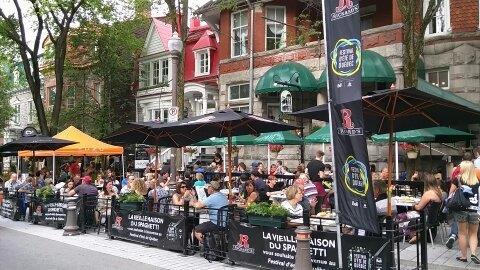 Dining on the Grande Allee 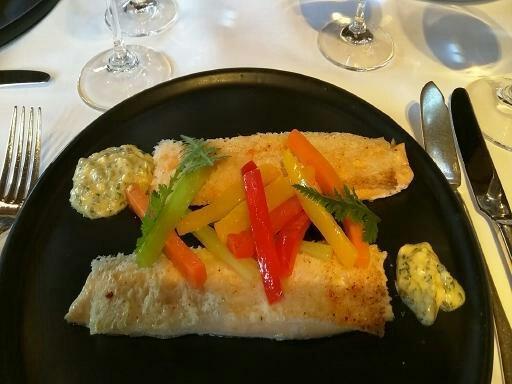 Fish and chips at Panache 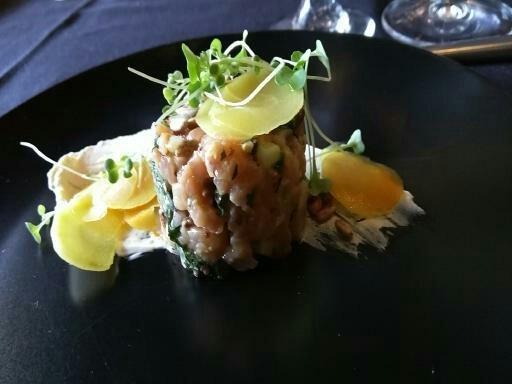 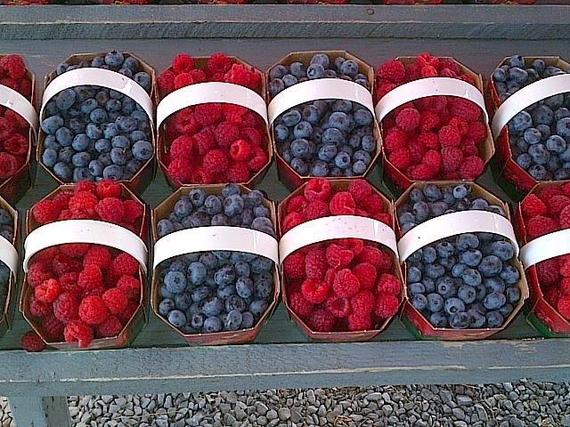 Local berries at the farmers market
SAMPLE THE CUISINE
With whole streets virtually devoted to dining, it's no wonder Quebec boasts a record percentage of restaurants to populace. Grande Allee, Cartier Street, and Saint Anne Street all are lined with indoor and outdoor cafes, bistros, and bars where locals, tourists, and visitors sample local fare. Fresh foods are sourced from the nearby l'Ile d'Orleans and the downtown bustling farmers market opens every day from 9-5. Fresh strawberries, blueberries, raspberries and corn precede the annual apple harvest and are supplemented all year by dozens of local cheeses and, of course delicacies concocted of maple syrup. 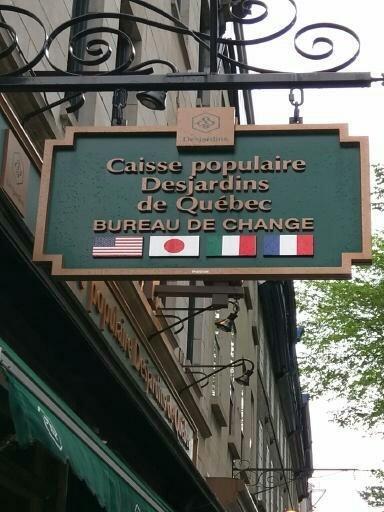 Favorable exchange rate
TAKE ADVANTAGE OF THE EXCHANGE RATE
Icing on the cake this year is the currency exchange rate. With the Canadian dollar worth only around 80 cents American, visitors get what amounts to around a 20 percent discount on purchases. Avoiding the overseas airfare and taking advantage of the exchange bonanza are just two more reasons to spend the whole season in the charming city that is North America's answer to Paris.