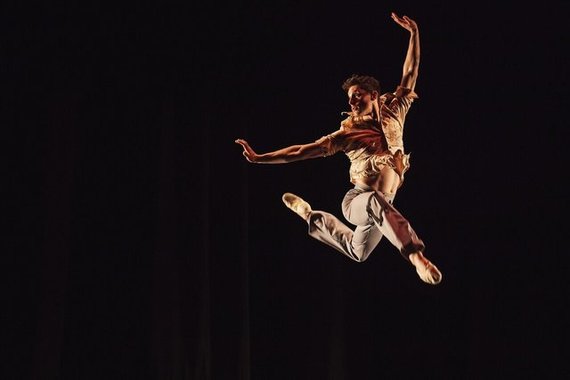 Denver's premier dance Company, Wonderbound had scheduled the Rock Ballets into their 2016 season well before the world heard the news. In a perfect confluence of time and space, sound and vision, Artistic Director Garrett Ammon's ballets, set to the music of David Bowie and Queen take flight a month after the legendary artist's ascent. The popular program has been here before, but you haven't seen it like this.

Not only will the Wonderbound supernova perform these stunning works, the music will be played live by a supergroup comprised of Denver's Chimney Choir and the Ian Cooke Band.The music of Queen and David Bowie will be featured along with original tunes by both bands.

Can you imagine the kinetic imagination of Garrett Ammon set free to the lyrical strains of Queen's "Love of My Life"? Gives me goosebumps just thinking about it so I'm sure that when the dancers take stage for "Bohemian Rhapsody" I'll be in tears, and "We Are The Champions" should give me a chance to pick myself up off of the floor. Ammon's star shines in "An Occasional Dream," delving into one of the most famous tales of history and Bowie's edgier songs, "Life On Mars," "Time" and "Space Oddity", while Wonderbound Company Artist Sarah Tallman opens the night with her creation , "Unbroken Sky". This world premiere will feature songs created by the supergroup septuplet of Chimney Choir and Ian Cooke Band and will evoke the explosion of the Beatnik generation.*snaps*

"We are very excited to be a part of ​ Rock Ballets ​ . It will be a lot of fun to team up with Ian Cooke Band and reinvent some of the classics." - Kevin Larkin, Chimney Choir.

And if that's not enough, Leon Gallery has curated Denver Artist Mario Zoots for an exclusive exhibition of new works exploring themes from old Rolling Stones issues from the Bowie and Queen eras. (Oh great, now I belong to an 'era').
Rock Ballets ​opens February 13 and will run for five (5) performances throughout Denver. More information on the production can be found at ​ wonderbound.com​ .
If you can't wait, stop by a limited seating Teaser at the Wonderbound Studio at Junction Box, for a taste of what the full-length performance will hold. Teaser #9 is on February 2, 2016 at 6:30 pm.