Players including the star quarterback have rallied behind Chy Johnson, a 16-year-old special needs student who was tormented by kids at school, reports 3TV News and azfamily.com.

The players now eat with her at lunch and watch her back.

Johnson's daily life was far different before. She came home crying every day and the bullies "threw trash at me," she said in the interview.

Chy's mother, Elizabeth Johnson, contacted Carson Jones, the popular starting quarterback, for help. She reached out to the right guy. According to Fox Sports Arizona, Jones is not only a leader of the Phoenix-area school's undefeated football team, but is a straight-A student who's active in his church and in charity work.

All Chy's mom wanted was a name or two of those responsible. Instead, Jones went the extra yard, joining Chy at lunch with other teammates. They keep an eye on her the rest of the school day, too. Varsity players Tucker Workman and Colton Moore also spearhead the effort.

“They’re not bullying her anymore because they’ve seen her with us or something," Jones said.

Chy has a brain disorder called microcephaly, making her head smaller and her life expectancy much shorter -- perhaps 25 to 30 years, the New York Daily News notes.

But school has become a lot more tolerable for the 16-year-old sophomore now that she has a winning team on her side. "They’re not mean to me, because all my boys love me," she told azfamily.com.

Click through the slideshow below to see more photos of Chy Johnson hanging out with her new friends. 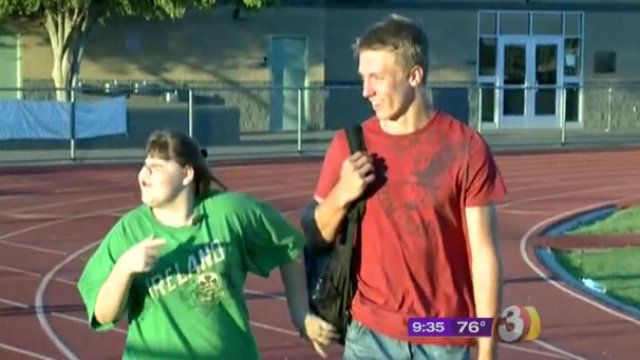 1 / 6
Football Players Defend Bullied Teens
Chy Johnson, who suffers from a brain disorder, used to find school intolerable, <a href="http://www.azfamily.com/news/local/Queen-Creek-football-players-stand-up-for-bullied-special-needs-student-175920391.html">azfamily.com reports.</a> But now that a crew of football players have taken Chy under their wing, the 16-year-old no longer has to worry about bullies mercilessly taunting her anymore.
azfamily.com