LONDON -- For a reporter who has chronicled the long bloody struggle by Irish nationalists to break free of British domination, it's been an almost freakish time to visit the UK.

England -- and perhaps most of all London, the biggest magnet for overseas visitors -- is still engulfed in the jingoistic torrent occasioned by Elizabeth II's golden jubilee celebrating her 60 years as Queen.

The apogee for me and many others came yesterday during Elizabeth's jubilee visit to Northern Ireland. Especially the way it functioned to imprint with royal blessing the region's remarkable peace process -- the hard-negotiated mechanisms that have brought old enemies together... got them to share power with each other... and finally -- it's hoped -- ended decades of vicious bloodshed. 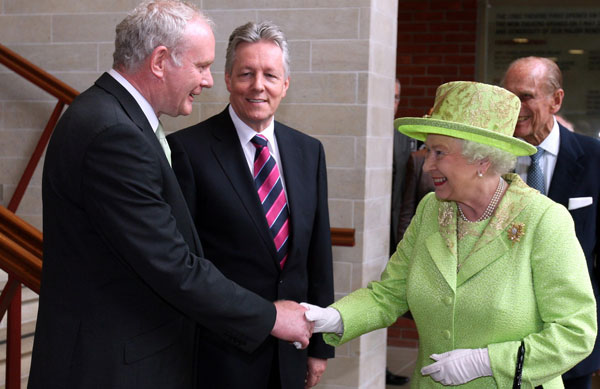 Her repeatedly prefigured and fussed-over handshake with Martin McGuiness, Northern Ireland's Deputy First Minister (effectively the region's co-premier) who was once an Irish Republican Army commander, came to be treated by the media as the photo-opportunity to beat all photo-opportunities from the seemingly endless conflict known euphemistically as "The Troubles."

Readers of my column "The Media Beat" will perhaps recall how, when a young journalist wielding my notebook, I would shadow a slightly younger McGuiness who carried his ArmaLite rifle in and out of Derry City's backstreets, his quarry as often as not British soldiers who were fighting, formally at least, in service to that same queen. There's little doubt in my mind, therefore, about the huge symbolic significance of the monarch meeting, officially and cordially, with this particular minister.

Many British papers and news broadcasts have dwelt insistently on the personal poignancy of this moment for the Queen -- considering the IRA's assassination in 1979 of her relative, Lord Louis Mountbatten, whom she used to call "Uncle Dickie". A few journalists have also dug into the deep bedrock of grief and anger among nationalist families who have lost loved ones at the hands of the Queen's soldiers, or at those of the so-called "loyalist" paramilitary groups who venerate her and her constitutional rule over their country.

Her and her government's media-managers inevitably handled this momentous encounter with egg-shell delicacy. Absolutely no cameras were allowed anywhere near the initial -- doubtless somewhat stiff -- greetings. (McGuinness spoke in Irish.)

And it was significant that the carefully-chosen venue was not some governmental event, but a charity art-show -- displaying creative output from a community bridge-building foundation that links both Irish nationalist and UK unionist populations. The actual photo-op could thus be diffused into a royal 'walkabout' (stock-in-trade for the Windsor family) combined with other notables admiring the artwork. In no sense could it look like Minister McGuinness welcoming and escorting around this absolute embodiment of British rule.

As the choreographers were spinning it beforehand, it would be the brief final farewell once the ice was now well-broken among the principals (who also included the visiting Irish Republic's President Michael Higgins -- diffusion again there) that provided the quintessential image of ruler and ex-rebel in the same frame together, perfunctory though the re-encounter might have been in real life.

The delicate diplomatic dance in Belfast also had me reflecting on my main assignment here, and about someone who wasn't present at this piece of history-in-the-making, but without whom it probably couldn't have happened.

While in Britain, I've been talking once more with ex-Prime Minister Tony Blair -- whose efforts, and those of many others too, of course... working if not always in harmony but with a shared purpose -- resulted in Northern Ireland's historic peace agreement being signed in the first place.

It's been intriguing for this British observer returning to report on my country-of-origin for an American audience, to take in at first hand how much animosity Blair still stirs up in the country, a full five years yesterday from his departure from office. Animosity that Americans generally do not appreciate in my experience.

He still has admirers here, for sure, but there are many more vocal people, and frequently powerfully placed in the media, who with English terrier-like insistence cannot give up one jot on their condemnation of his leading Britain (manipulating it, they say) into the Iraq war.

News and editorial headlines this week like "Now Iraq Truth Confirmed At Last" and "Why Blair Must Be Questioned Again" greeted the publications of some further memoirs from his former spin-meister Alastair Campbell. In truth, though, little that wasn't already known came out concerning Blair's insulating the government's own 'nuanced' assessment of the legal basis for war from any critical deliberations among his own cabinet colleagues, given that the attack on Saddam Hussein had not been given a specific green light by the United Nations.

We're a long way of course from history's overall judgment on Blair's ten-year leadership of the nation. It's possible that his many detractors' often venomous assessments will forever diminish his reputation.

But I for one -- whatever my own often 'nuanced' feelings about him -- remain fully convinced of Blair's crucial contribution to peace in Northern Ireland. He can fairly be credited with applying a vital kickstart to the Northern Irish people's effort to start tentatively at first deconstructing their previously intractable enmities -- and building with increasing confidence a new, peacefully functioning society. Yesterday's extraordinary pictures were a fine testimony to that contribution.

Read more of David Tereshchuk's media industry insights at his weekly column, The Media Beat, with accompanying video and audio. Listen also to The Media Beat podcasts on demand from Connecticut's NPR station WHDD, and at iTunes.