Any bartender worth their margarita salt is going to draw regulars, but at least one of Leslie Schirmacher's regulars isn't your regular kind of regular.

Nope, he's a ghost. And his name is Bruce. Oh, and, according to her, he looks like a Scottish version of actor Kevin Spacey.

For 25 years, Schirmacher, 58, has been bartending at the Queen Mary, a retired ocean liner that was turned into a hotel in Long Beach, Calif.

The Queen Mary has long been considered one of the most haunted places in America, but Schirmacher didn't start palling around with apparitions until three-and-a-half years ago when a customer pointed one out to her.

"She was an older woman who asked me if I had ever had any experiences with ghosts," Schirmacher told to HuffPost Weird News. "I said, 'No,' and she said, 'I see dead people and there's one right next to you.' So I leaned over and kissed him on the cheek."

To say Bruce was smitten was an understatement. Schirmacher claims he's been hanging out at her bar, the Starboard Lounge, ever since. However, she's played a little hard to get at times.

"When I kissed him, he was on the barstool, and I told the woman, 'I don't want my ghost to be short," so he stood up and turned out to be around 6-foot-1," she laughed. "The woman told me he thought I looked like a past love of his."

As much as she can tell, the ghost's name is Bruce Brandon, and he supposedly hails from Aberdeen, Scotland. However, all the research she and others have done to find out if he ever really existed haven't turned up anything.

"I never could find out anything about him," she shrugged. "But there's this picture some friends from England took of me where you can see his face on top of the piano smoking a cigar." 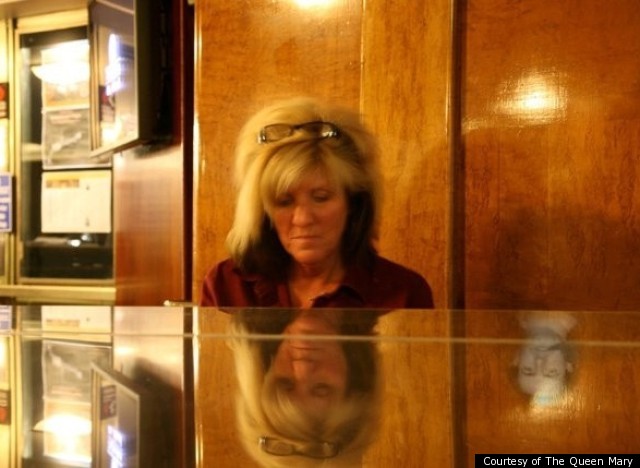 To be fair, Schirmacher makes no claims to be a paranormal expert or an expert on photography and is only claiming what she perceives. However, photography experts at The Huffington Post who've analyzed the photo believe the purported ghostly image looks as if it's most likely been photoshopped or manipulated in some capacity, although a preliminary investigation was unable to make that conclusion.

Meanwhile, Schirmacher remains convinced that she has her own personal ghost hanging out with her at the Starboard Lounge. It's hard for Schirmacher to tell if he's at the bar through conventional means, so she uses a crystal pendulum and holds it and asks if there are ghosts in the room.

Schirmacher believes Bruce is there to safeguard her, but he's also a bit of a prankster.

"I was told [by the woman who first noticed him] that he was here to protect me, and I do feel like someone is watching me," she said. "However, there are times when he plays tricks such as moving the glasses off the wine case."

Erika Frost, an alleged psychic medium who hosts weekly paranormal tours on the Queen Mary, says that while ghosts are common on the ship, it is not common for someone to have one of their own.

"This is definitely one of the most haunted places in the world," she told HuffPost Weird News. "There may be hundreds of ghosts here, but it's unusual for one to only connect with a single person."

Frost admits she's never had an encounter with Bruce and speculates that his connection with Schirmacher goes beyond time and space.

"It could be a soul connection, such as past lives," Frost said. "For that reason, he only connects with her."

Luckily for Schirmacher, Frost says her ghostly bar patron is more polite than some of the other spooks who run amuck on the ship, which has been used both as a cruise ship and to transport soldiers across the ocean during World War II.

"Some of the workers in the boiler room could be pretty wild," Frost said. "I know some women who say they've been goosed by ghosts while touring the ship."

Schirmacher says her ghost is a complete gentleman and hopes her story helps others who may be dealing with their own personal ghosts.

"If anyone asks me advice on how to deal with their own ghost, I say, 'Embrace it. It's there to help you,'" she advised.

WATCH: LEARN ABOUT THE QUEEN MARY IN LONG BEACH, CA: