It's been just a few weeks since the newest Queen of the Universe was crowned, and even though there's no new official currency printed with the monarch's face on it, and no multi-day, multi-network telecast of the grand coronation, with a title as broad-spanning and all-inclusive as "Queen of the Universe," you'd think you'd at least have gotten some sort of memo by now or something.

If you weren't in the audience at Circus Disco in Los Angeles on November 6th, it's very likely you weren't aware that Daniela Sanchez, competing as Miss Mexico, became the 38th recipient of the Queen of the Universe crown.

PHOTO GALLERY
The 2011 Queen Of The Universe Pageant

Since she began producing the pageant, Samala has always seen contestants come from all over the map to compete for the title, though she added that more used to come from foreign countries when it was easier for them to obtain visas.

"When I took over, my non-profit beneficiary had always been Christ Chapel AIDS Food Store of Long Beach, because the first pageant I entered was produced by their pastor at the time and called 'The Closet Ball.' In that contest, you come out as a guy, you're judged as a guy, then you have 45 minutes to transform and then you come out as a girl. And I won it. And so when I took this pageant over, I made it a point, from that time on, to give to them."

Yet Samala's intention to use the pageant as a means to give back extends beyond raising money for charity.

"I use this as a tool for outreach to the girls, and to educate other groups in the community about our culture, because a lot of people come from every segment of the community, and I want to educate them so they know how to receive us and see that we are professionals."

Maria Roman, who competed this year as Miss Argentina, explained that for a while it appeared that Latinas had stopped competing because they didn't think they were getting a fair chance.

"The pageants usually were all Asian women and there was never a Latina that would win so the girls wouldn't compete," she explained. "And I came into the scene because I thought I was kind of heavy and I would show them that beauty comes in all shapes and sizes. So I competed about eight years ago for Miss Gay Pride [a separate pageant] and I was the first one to win that and from there I competed in Miss USA and I was the first one to win that. And then I think the Latinas started saying well there is a chance that I can win...if this big girl can win...if this curvy Latina can win then there's a chance. And then you'll see tonight, there will be a lot of them that are Hispanic."

Usually, Kamala explained, those competing choose to represent their country of origin, but she'll allow contestants to choose another country, particularly if someone else is already representing her native region.

For Roman, choosing her country is a matter of strategy, and having competed several times, she told me that she knew that competitors take the stage in alphabetical order. "I'm Puerto Rican but chose Miss Argentina. You either open the show or you close it; but I think it's good to open with energy."

On the other hand, there's Anna Melissa Prime, and though she's originally from Guatemala, she chose to represent Venezuela this time around, for her sixth attempt to win the crown.

Just two slots ahead of Miss Venezuela in the line-up was Vi Puzon, a Filipina who competed this year as Miss USA after winning the preliminary Queen USA competition.

Puzon said that this year was her eighth or ninth time competing--"I lost track," she told me unselfconsciously. At least she admitted that she was a little nervous about competing. "If you don't get nervous any more, that's the time to stop doing pageants."

Yet Puzon also refused to acknowledge that she was threatened by any other competitor. With the professionalism and perfect tact of a seasoned competitor, she identified the biggest competitor as herself. "If I start look at others then it's not bringing out the best in me."

Thankfully Maria Roman leveled with me and identified Miss Mexico as the one to beat.

But going by the history of the pageant, the odds were severely stacked against Daniela Sanchez, also known as Miss Mexico.

This year was Sanchez's first year competing and Karina Samala insisted that "it's very seldom that I get a girl who enters one year and wins; it's very, very tough. I've had one that's been competing for over ten years and only one or two that have entered and won their first year."

One of those exceptions was Yuni Carey--"'Carey' like Mariah Carey' she noted--who won Queen of the Universe in 2006.

Carey was also willing to point out who she thought would ultimately be vying for positions in the top five of the competition. She identified a couple of the Filipina competitors, Maria Roman and Daniela Sanchez, adding to her prediction that her Mexican friend "might even be the winner."

But even though our communication was brief, Sanchez diplomatically told me "all of the girls" were her biggest competitors. 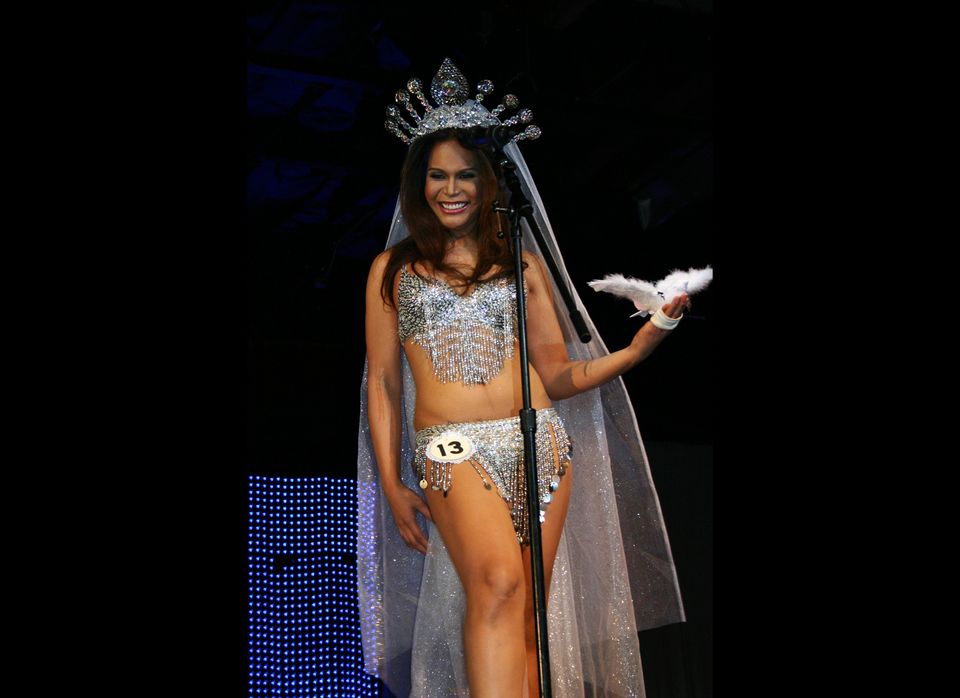 1 / 23
Miss Russia
Miss Russia appears to hope that "a bird in the hand" is worth the Queen of the Universe crown.
Orlando Tirado