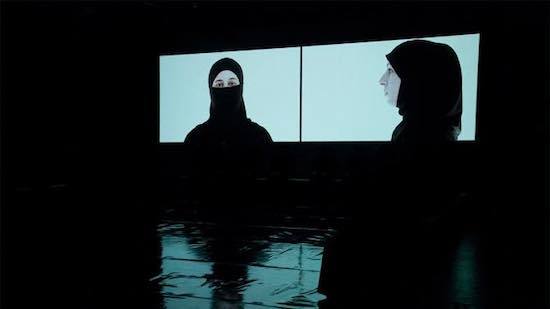 At the last Abu Dhabi Film Festival -- and I mean last in every way since the eighth edition of this beloved cinematic bridge across cultures turned out to be its swan song -- one film quietly grabbed my imagination. It was Yasmin Fedda's Queens of Syria, and Fedda then went on to deservedly win the Best Director from the Arab World award in the Documentary Competition.

Why yet another film about Syrian refugees, women of conflict now based in Jordan, albeit workshopping a production of The Trojan Women, the ancient Greek tragedy by Euripides? Why did it catch my heart? The line-up of ADFF was chock full of great documentaries, heartbreaks and joys from the Arab world and I was on a jury. It was exhaustingly beautiful to watch everything, but I now realize some works of art were not given the attention they deserved, from yours truly.

Still Queens of Syria lingered on. I couldn't find the right moment to write about it, until now, and it's well worth it when the film is enjoying a one-week run at the Curzon Bloomsbury in London -- part of their Broken Borders DocHouse program. And the more time passes, the older I get, the wiser I try to become, the more I realize that "them" is us. That a group of women displaced by civil war can possess the same needs, wants and cravings than I.

I am a queen of Syria, I am a Trojan woman, I am the sum of all my sisters around the world. And until each one of us is cared for and respected, each one of our souls healed of the pain, none of us can really be happy.

In Abu Dhabi, I caught up with the film's director Yasmin Fedda and her producer Georgina Paget. Two strong, beautiful women, part of that rare breed who support each other instead of finding a reason to antagonize their fellow female human beings.

What was your inspiration for embarking on this cinematic journey with these women?

Yasmin Fedda: William Stirling and Charlotte Eagar came up with the concept of doing the Syrian Trojan Women with Syrian refugees and I was brought on board to basically film the process that was happening. I was inspired when I first came along to the workshops but we weren't exactly sure how we were going to film it. We weren't exactly sure what would happen or how many women would participate.

How did it then develop? How did you choose your "characters"?

Fedda: In the end it was 25 women. The Syrian producer went along to people's houses, to community centers to try and convince people to join. They were all quite curious at first about what it was, so I just decided to follow it as it went. But a lot of people didn't want to be filmed and we even wondered if it should be animated at one point. After a while we found a lot of people who were happy to be filmed.

What were the biggest challenges in filming Queens of Syria? 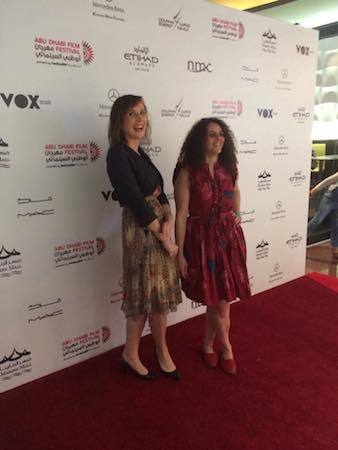 Georgina Paget: I think the biggest challenge for us -- and it does come up in the film -- was the weather! There was a snow storm, there was all this rain and things like that in a city like Amman that is not used to snow, so it actually weirdly did become a problem. Things went from easy and organized suddenly to a case of "who can actually leave their house?" Even having the women reach the theater was tricky.

Fedda: For the Syrian producer [Itab Azzam] who is not here, what was most challenging was dealing with the women every day. It's such a huge group of people and keeping everyone happy, and sourcing out any problems, that was challenging.

Paget: You can imagine they'd all have problems, they are refugees living in hard environments.

Fedda: The other challenge, for Omar [Abu Saada] and the theater crew, there were some stories they really liked and people dropped out. Creatively that was an issue.

Were there some things you really wanted but could not put in the film?

Fedda: There were a lot of things we couldn't put in there because people didn't want to say them on camera. Exposure in the media can be really big, potentially, and people didn't want any specific stories -- which I thought were way more powerful -- but couldn't use them. We filmed them and couldn't use them or people never said them on camera. It's still about the invisible fear.

Do you think we as women could have a much better conversation about Syria and could resolve the problems?

Fedda: I'm not so sure about that. There are also women who are very pro-regime and very militaristic as well.

But perhaps we could begin a better dialogue?

Fedda: I would hope so, but I've had conversations with women who have very different political views to mine and sometimes it's a little bit scary, because I don't know where that would go. I'm not saying everybody but I think that exists and we need to be aware of that as well. Also men suffer a lot. These women definitely suffered a lot but their male relatives suffered as well.

What do you hope people will take away from your film?

Fedda: I'm hoping, and always do when I make films, that people will have a human connection with somebody else. Empathy for someone else. Every doc I work on, that's what I hope.

The idea of a woman in a niqab speaking out is very unusual for a Western audience. You do that well, to show them being.

Fedda: Because they just are.

Paget: Everyone in the film agreed that they wanted to be heard, because they all felt isolated, neglected and ignored. And you can see why they would feel that.

Talal Derki's Return to Homs, another documentary, helped decode Syria for me but the film had a layer of these men, rebels, feeling sorry for themselves. This was lacking in your film, the women never have that. The courage that they show is what appealed to me as a viewer. No "woe me" moments.

Paget: The women were very strong minded and very strong willed. A lot of them are probably used to being strong for their families as well. They're trying to carry on normal.

Is there a solution to Syria?

Fedda: There has to be eventually. I don't know how or what.

Anyone who makes a film or writes about it hopes there will be, right?

Fedda: Of course I do, I care about that place so much, I hope there is a solution. I don't know how because there is so much devastation and so many murky complex things going on, I would hope that eventually there is justice and reconciliation. And acceptance of war crimes.

Queens of Syria trailer from Yasmin Fedda on Vimeo.

For info and tickets check out the Curzon website.

Images courtesy of the filmmakers, used with permission.